MRAUK U (Burma) : Most ancient site in Arakan bulldozed for railroad

Most Ancient Site in Arakan Bulldozed for Railroad

Kyauk Taw: The most ancient city of Arakan, known historically as Danyawaddy, which existed in the 6 century BCE, was destroyed by bulldozers for construction of a railroad that passed over the walled palace grounds, said a historian in the region on the condition of anonymity. 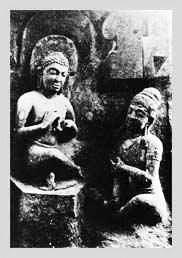 Sandstone Buddha in preaching mudra, with richly dressed man at his feet. From Kyauk-taw, Arakan and may date from as early as 400 A.D

The authority started construction of the railroad in the last week and it is now passing over the site of the palace.

"There are many alternative paths for constructing the railway to bypass the ancient palace, but the authority always plans to construct the railroad over the ancient city sites in Arakan State. Every Arakanese believes the government wants to destroy the invaluable Arakanese historic sites on the pretense of the railroad," he said.

He also said, "If the railroad is constructed near the Thari Chaung Creek, located between Kyauk Taw and Mrauk U Township, the railroad would be very useful for local people because there are many villages in that area. But now the authority is constructing the railroad in an isolated area." 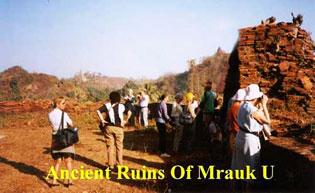 At the site of the Danyawaddy ancient palace, there are many features such as moats, city walls, and ruined Buddha statues. All are likely to have been damaged in the railroad construction.

According to historical records, the historic sites of ancient Danyawaddy were active from around 2666 BCE to 788 CE. During that time, King Sanda Thu Riya cast Mahamuni Buddha and other precious images. The image of Mahamuni is now in Mandalay after it was forcibly removed and taken there when Burmese kings conquered Arakan in 1784.

The World Arakanese Organization, based in the USA, also sent a letter to UNESCO asking them to save the ancient sites of Arakan from further destruction at the hands of the military.

In the letter, the WAO pointed out that Burma is party UNESCO's World Heritage Convention, and in 1996 the Mrauk U Archaeological Area and Monuments was submitted to UNESCO according to Paragraph 1, Article 11, of the convention for inclusion on the World Heritage List. To protect and conserve cultural heritage, the Burmese government has its own law called The Protection and Preservation of Cultural Heritage Regions Law, enacted in 1998. However, the current military government has been violating this law and has failed to abide by the World Heritage Convention. The WAO urged UNESCO to quickly investigate the railroad project and help save Mrauk U from further destruction by taking necessary measures.