An ancient sword bearing kanji characters that show the year 570 according to the Chinese sexagenary cycle has been unearthed from an ancient burial mound here, the local education board announced on Sept. 21.

The discovery made by the Fukuoka Municipal Board of Education is consistent with the Chronicles of Japan, one of Japan's oldest history books, which says Japan imported the Chinese calendar from Paekche, one of the countries that existed on the Korean Peninsula.

It is an epoch-making discovery in that it is the oldest item showing that Japan used a calendar in ancient times.

Education board officials said they found the 75-centimeter-long steel sword in the stone chamber of the G6 mound at the Motooka burial mounds in Nishi Ward, Fukuoka, which are believed to have been built sometime around the mid-seventh century, along with mid-seventh century earthenware.

X-ray photos of the sword show that it bears 19 Chinese kanji characters, each measuring 5 millimeters square. Experts say the swords were inscribed with the characters and that either gold or silver were poured into the characters, adding that the sword was made in Japan.

The characters show that the sword was produced in 570 by the Chinese sexagenary cycle, a rotation of 60 terms to show years.

There is a large time difference between when the sword was made and when the burial mounds where the weapon was found were built.

According to the Chronicles of Japan published in the eight century, Paekche dispatched a calendar expert to Japan in 554 in response to a request by Japan the previous year. The calendar that the expert brought to Japan at the time is believed to be the Genka calendar made in Song during the era of Southern and Northern Dynasties in China from the early fifth to late sixth centuries.

Experts have pointed to the possibility that the Genka calendar had been used in Japan since the era of Emperor Yuryaku in the fifth century. 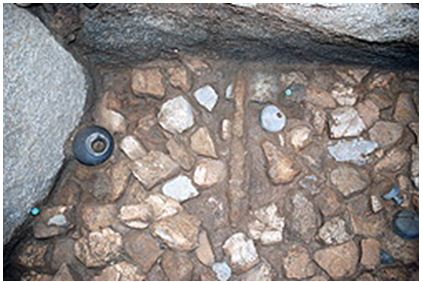 The inside of the G6 mound of the Motooka burial mounds in Nishi Ward, Fukuoka, where the sword has been found is pictured in this photo courtesy of the Fukuoka Municipal Board of Education.

The date written on the sword matches that of the Genka calendar.

Professor Yasutoshi Sakaue of ancient Japanese history at Kyushu University describes the sword as important proof that the Genka calendar became widespread in Japan after the Chinese calendar expert visited Japan in the sixth century.