Several human skulls found mounted on wooden stakes have been uncovered from a Stone Age lake bed in central Sweden in what is believed to be the first discovery of its kind anywhere in the world. 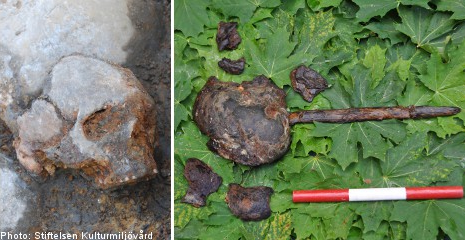 “We found two skulls that still had wooden stakes sticking out of them through a whole at the base of the skull,” archeologist Fredrik Hallgren, head of excavation with the Stiftelsen Kulturmiljövård Mälardalen (‘Cultural Preservation Society of Mälardalen’) told The Local.

The skulls and other artifacts, including bones of wild animals, were recovered at the Kanaljorden excavation site in the town of Motala in central Sweden. 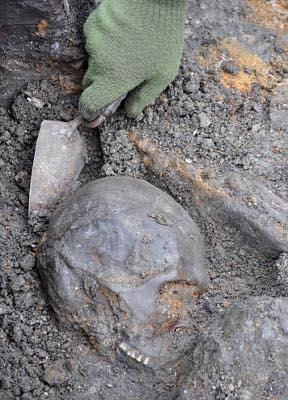 In another case a temporal bone of one individual identified as a female was found placed inside the skull of another woman.

Altogether Hallgren and his colleagues have identified skulls or skull fragments from 11 individuals, including both men and women and ranging in age from infants to middle-age.

The bones were found in what was a shallow lake during the early Stone Age which appears to have served as a ceremonial burial site.

“Clearly this lake was some sort of holy place for the people who lived here at the time,” said Hallgren.

“One thought is that it was part of some sort of secondary burial ritual where the skulls were removed from dead bodies that had initially been placed elsewhere,” said Hallgren.

“After the soft tissue had rotted away, the skulls were removed and placed on the stakes before being placed in the shallow lake.”

Another theory is that the mounted skulls are trophies brought back from battles with other settlers in the area.

“It may have been a way to prove one's success on the battlefield,” Hallgren explained.

Further analysis is currently underway to determine if the bones are remains of locals or people with a distant geographic origin. Using DNA and other laboratory techniques, archaeologists will also try to find out if the remains found at the site belong to a single family group or persons unrelated to one another.

Hallgren said that, as far as he knew, the discovery of human skulls mounted on stakes from this period of history was unprecedented.

“There are other examples of human heads being mounted on stakes, but most of the finds are from the colonial period,” he said.

The Kanaljorden settlement excavation site has been ongoing since 2009 and is located about 500 metres from Motala’s central train station. The site dates from a part of the Stone Age known as the Mesolithic period, at which time the area around Motala was deemed an almost perfect place to live.

There was no agriculture in the area, however, with settlers instead surviving by fishing, hunting, and gathering.

The object, which measured 10-11 centimetres (4 inches) long and 2 centimetres in diameter, had been fashioned from a stag’s antler.