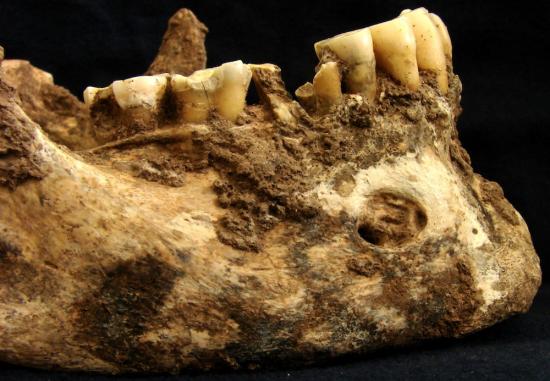 The mandible of a 30-something man buried in Rome's Castellaccio Europarco cemetery in the Imperial Period shows signs of cavities and an abscess. The bones revealed a high proportion of millet in the man's diet.  CREDIT: Kristina Killgrove

Ancient Romans are known for eating well, with mosaics from the empire portraying sumptuous displays of fruits, vegetables, cakes — and, of course, wine. But the 98 percent of Romans who were non-elite and whose feasts weren't preserved in art may have been stuck eating birdseed.

Common people in ancient Rome ate millet, a grain looked down upon by the wealthy as fit only for livestock, according to a new study published in the March issue of the Journal of Anthropological Archaeology. And consumption of millet may have been linked to overall social status, with relatively poorer suburbanites eating more of the grain than did wealthier city dwellers.

The results come from an analysis of anonymous skeletons in the ancient city's cemeteries.

"We don't know anything about their lives, which is why we're trying to use biochemical analysis to study them," said study leader Kristina Killgrove, an anthropologist at the University of West Florida.

Health studies out last week heralded the modern Mediterranean diet, rich in olive oil, fish and nuts, as a good way to avoid heart disease. In ancient Rome, however, diet varied based on social class and where a person lived. 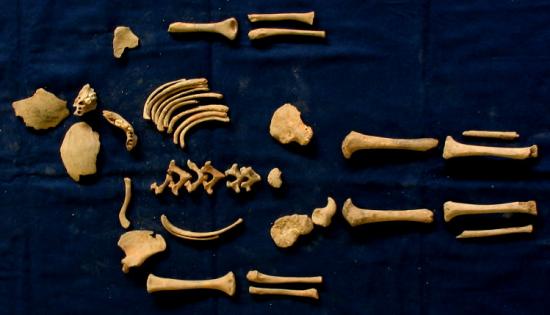 The bones of a Roman toddler from the Casal Bertone Mausoleum suggest that the 18-month old was in the process of weaning when he or she died.  CREDIT: Kristina Killgrove

Ancient texts have plenty to say about lavish Roman feasts. The wealthy could afford exotic fruits and vegetables, as well as shellfish and snails. A formal feast involved multiple dishes, eaten from a reclined position, and could last for hours.

But ancient Roman writers have less to say about the poor, other than directions for landowners on the appropriate amount to feed slaves, who made up about 30 percent of the city's population. Killgrove wanted to know more about lower-class individuals and what they ate.

To find out, she and her colleagues analyzed portions of bones from the femurs of 36 individuals from two Roman cemeteries. One cemetery, Casal Bertone, was located right outside the city walls. The other, Castellaccio Europarco, was farther out, in a more suburban area.

The skeletons date to the Imperial Period, which ran from the first to the third century A.D., during the height of the Roman Empire. At the time, Killgrove told LiveScience, between 1 million and 2 million people lived in Rome and its suburbs.

To determine diets from the Roman skeletons, the researchers analyzed the bones for isotopes of carbon and nitrogen. Isotopes are atoms of an element with different numbers of neutrons, and are incorporated into the body from food. Such isotopes of carbon can tell researchers which types of plants people consumed. Grasses such as wheat and barley are called C3 plants; they photosynthesize differently than mostly fibrous C4 plants, such as millet and sorghum. The differences in photosynthesis create different ratios of carbon isotopes preserved in the bones of the people who ate the plants.

Nitrogen isotopes, on the other hand, give insight into the kinds of protein sources people ate. 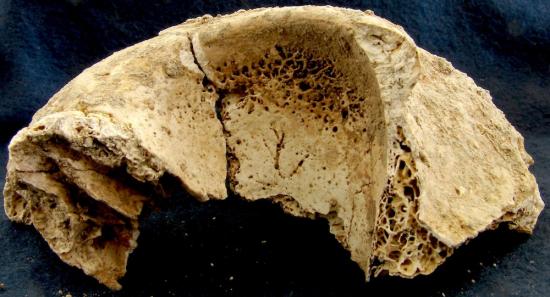 A skull fragment from a teen buried at Rome's Casal Bertone necropolis. The teen ate a millet-heavy diet in childhood but switched to wheat in the years before death. Pores in the bone of the eye socket known as cribra orbitalia suggest the teen was anemic. CREDIT: Kristina Killgrove

"We found that people were eating very different things," Killgrove said. Notably, ancient Italians were locavores. Compared with people living on the coasts, for example, the Romans ate less fish.

Historical texts dismiss millet as animal feed or a famine food, Killgrove said, but the researcher's findings suggest that plenty of ordinary Romans depended on the easy-to-grow grain. One man, whose isotope ratios showed him to be a major millet consumer, was likely an immigrant, later research revealed. He may have been a recent arrival to Rome when he died, carrying the signs of his country diet with him. Or perhaps he kept eating the food he was used to, even after arriving in the city.

"There's still a lot to learn about the Roman Empire," Killgrove said. "We kind of think that it's been studied and studied to death over the last 2,000 years, but there are thousands of skeletons in Rome that nobody has studied … This can give us information about average people in Rome we don't know about from historical records."