Moshav Aluma (Israël): Discovery of a major church with a splendid mosaic from the Byzantine period

The discovery was made during a salvage excavation as part of development work by the Israel Land Authority prior to the construction of a new neighborhood at Moshav Aluma,near Pelugot Junctionn 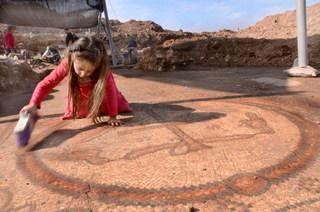 According to archaeologist Dr. Daniel Varga, directing the excavations on behalf of the Israel Antiquities Authority, "An impressive basilica building was discovered at the site, 22 meters long and 12 meters wide. The building consists of a central hall with two side aisles divided by marble pillars. At the front of the building is a wide open courtyard (atrium) paved with a white mosaic floor, and with a cistern. Leading off the courtyard is a rectangular transverse hall (narthex) with a fine mosaic floor decorated with colored geometric designs; at its center, opposite the entrance to the main hall, is a twelve-row dedicatory inscription in Greek containing the names Mary and Jesus, and the name of the person who funded the mosaic's construction."
The main hall (the nave) has a colored mosaic floor adorned with vine tendrils to form forty medallions. The medallions contain depictions of different animals, including: zebra, leopard, turtle, wild boar, various winged birds and botanical and geometric designs. Three medallions contain dedicatory inscriptions in Greek commemorating senior church dignitaries: Demetrios and Herakles. The two were heads of the local regional church. On both sides of the central nave are two narrow halls (side aisles), which also have colored mosaic floors depicting botanical and geometric designs, as well as Christian symbols. 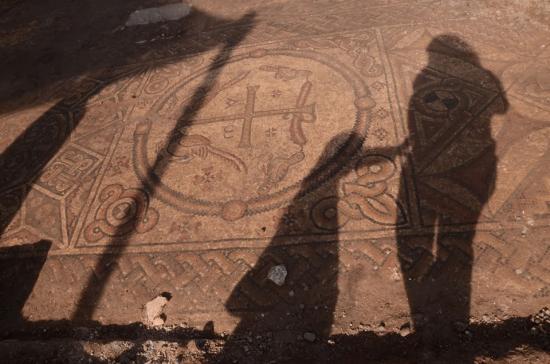 A pottery workshop, mainly for the production of jars, was also uncovered during the excavations and yielded numerous finds, including: amphorae, cooking pots, kraters, bowls
and different kinds of oil lamps. Glass vessels typical of the Byzantine period were also discovered at the site. The finds indicate a rich and flourishing local culture.
This church is part of a large and important Byzantine settlement that existed in the region. The settlement was located next to the main road running between Ashkelon on the sea coast to the west, and Beit Guvrin and Jerusalem to the east. Excavations by the Israel Antiquities Authority along this road have revealed other communities from the same period, but no churches have been found in them. The recently uncovered church may have served as a center for Christian worship for all the surrounding communities. Wine presses and pottery workshops found in the region attest to the economy of the local residents during the Byzantine period, who made their living from the production and exportation of wine via the coast to the entire Mediterranean region.
As for the future of the site, it has been decided to cover it over and preserve it for future generations. The magnificent mosaic that has come to light will be conserved, removed from the site and displayed to the public at a regional museum or visitors' center.