The remains of Richard III may be locked away in a coffin to be reburied this week, but the 15th-century king's genome is still offering scientists a chance to unravel royal mysteries.

After scientists uncovered evidence of infidelity in Richard's family tree last year, they announced today (March 25) they have discovered more hints of daddy drama in the historical family.

"Having worked in the world of genetic genealogy for years, this is not at all surprising to me," said Turi King, a geneticist at the University of Leicester. In the general population, false paternities occur in about 1 percent to 2 percent of births, King said.

Back in December, King and colleagues published a paper in the journal Nature Communications outlining the genetic evidence to support the identification of Richard's skeleton. 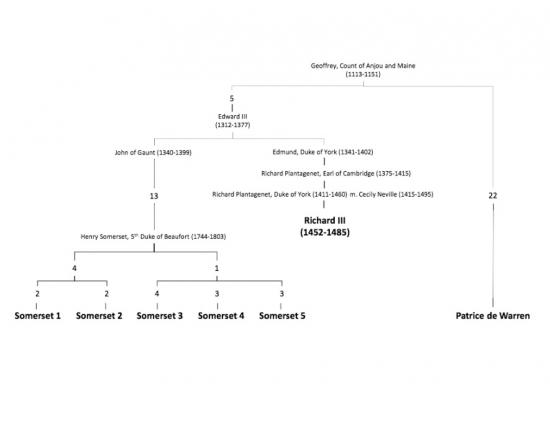 This family tree shows how Patrice de Warren is related to Richard III.Credit: University of Leicester

But King's team didn't find a match between Richard's Y chromosome (which is passed down only through the father) and the Y chromosomes from a group of five of his living male-line relatives, who all shared a common 18th-century ancestor, Henry Somerset, fifth duke of Beaufort.

To narrow down where this break occurred, King took a DNA sample from a man named Patrice de Warren, who emailed her and said he was a male-line descendant of Geoffrey, the Count of Anjou, who lived from 1113 to 1151.

"Lots of people contact me saying they think they might be related to Richard and would be happy to submit a DNA sample," said King. But she can't take samples from just anyone. It's only useful to look at male-line-only or female-line-only relatives. (DNA from Benedict Cumberbatch, for instance, wouldn't be of much use; the actor — who will read a poem at Richard's reburial ceremony tomorrow — is distantly related to the king through a mixture of male- and female-line ancestors.)

But de Warren's Y chromosome doesn't match either of these, King said, meaning there was at least one more case of false paternity in Richard's extended family tree.

"It hasn't helped us narrow down where the break is," King told Live Science.

King announced the findings at the Science Museum in London to celebrate the opening of a new exhibit on Richard III. The announcement comes just ahead of Richard III's reinterment in Leicester, England, where the medieval monarch's long-lost grave was discovered in 2012.