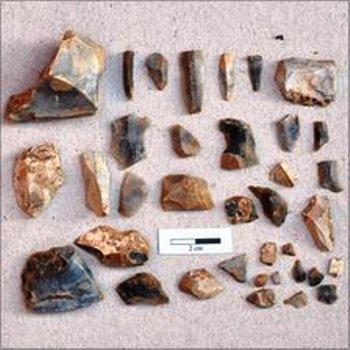 The discovery of artefacts during gas mains excavations in Monmouth has helped illustrate how the River Wye supported a Stone Age camp.

They indicate hunter-gatherers used the River Wye for food and transport some 6,500 to 7,500 years ago.

The late Mesolithic items show there were settlers in the area thousands of years earlier than previously thought.

The artefacts were found - during gas mains work - under a former riverbank where the River Wye used to flow before it changed course.

Elizabeth Walker, curator of Palaeolithic and Mesolithic Archaeology at National Museum Wales, examined the items after being alerted by Monmouth archaeologist Steve Clarke.

Ms Walker said: "It's a nice little group of later Mesolithic flints - middle Stone Age - they are probably around 6,500 or 7,500 years old.

"Among the items are two little flint barbs which would have been hafted [attached] onto a piece of wood or antler and used for fishing or hunting.

"We have also got a scraper from there which might have been used for cleaning the skins or scraping bark and twigs.

"There were also quite a few waste pieces of flint used in making the tools."

Jane Bray, of Monmouth Archaeology, said local archaeologists had been keeping a close eye on the excavation work in the town.

Mr Clarke found a fleck of charcoal in the sand of the ancient flood plain alerting them to what was beneath the old river bank. 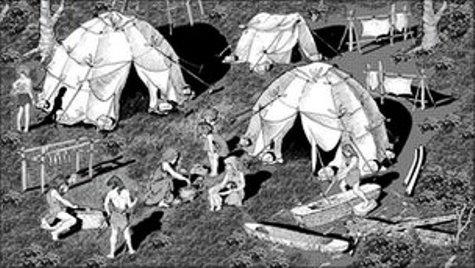 Ms Bray said: "They have been removing the gas mains in the top end of the town and we've been watching all the trenches as part of that.

"We watch them digging, get in and have a look. These are by far the earliest finds we've had."

The previous earliest known settlement in the town was believed to have been about 2,500 years old.

Ms Walker said the find suggested there was some sort of camp beside the river where people were making stone tools.

"They would have been near the river in the winter months and maybe up in the hills hunting in the summer.

"It's important evidence within the body of evidence about how people were living and what they were doing at this time."

She said there had been significant sites of this type found in Monmouthshire previously, but none next to the river.

The landscape during this period would have been one covered by trees and featuring animals such as deer, wolves and possibly horses.

"We had come out of the last Ice Age and the climate had really improved. All the trees and plants had moved back in," said Ms Walker.

"The people would've come back into Britain following herds of game that had been moving in for the plant food available."