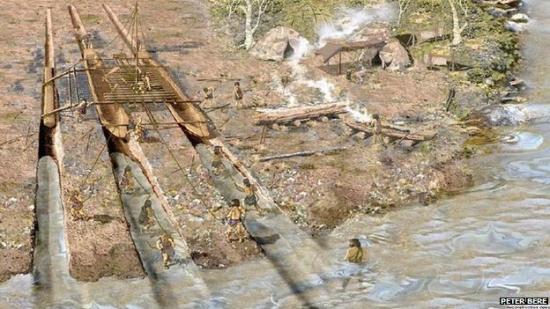 Archaeologists believe they have found the remains of a Bronze Age boat building community in Monmouth.

Excavations show 100ft-long (30m) channels in the clay along which experts think vessels were dragged into a long-gone prehistoric lake.

The research is being published in a book called The Lost Lake.

Author and archaeologist Stephen Clarke, 71, said: "I started digging here with the society 50 years ago - I wish I had another 50 years."

He said finds had helped the group to better understand the ancient history of Monmouth long before Roman times.

The town is served by three rivers but the group said it had evidence to suggest it was actually built on what was a huge prehistoric lake which became a home to hunter gatherers.

Over millennia it drained away and finds including charcoal from fires, flint shards and pottery from the Stone Age, Iron Age and Roman times have been found by the town's professional and amateur archaeologists.

They have been excavated in sites around the town and in different layers of clay, sand, gravel and peat as the earth-bed composition changed from lake, lagoon, marsh and dry land, according to Mr Clarke.

Among the discoveries are a pair of "dead-straight" metre-wide channels in the clay shaped like the bottom of wooden canoes - along with a third smaller groove.

Mr Clarke said it supported the theory of a vessel having a support arm, adding he was seeking the opinion of marine archaeologists.

These channels were found over a mound of burned earth which has been carbon dated to the Bronze Age although other finds around the area date back to the Stone Age.

"I have seen 14-tonne machinery sliding in the clay so it would have been easy to push a boat," said Mr Clarke.

He believes the finds suggest a settlement and boat building industry although no boat timbers have been found.

"There is a lot to explain," said Mr Clarke, adding that the area "must have been alive with activity for thousands of years".

"It is so new [the findings] that most people in the country do not know about it," he said. 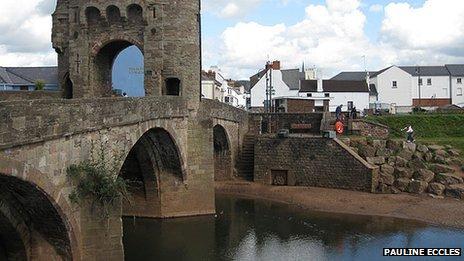 Monnow Bridge would have been under the prehistoric lake, says Mr Clarke