Modi’in (Israel): Is the Maccabees’ ancient mystery close to solution?

Few ancient sites in the Holy Land have ignited the imagination like the lost tombs of the Maccabees, the family that led a Jewish rebel army to victory against Seleucid religious repression in the second century BCE.

Beginning more than 140 years ago, travelers, clergymen and enthusiastic scholars of varying levels of religious fervor and competence have been looking for the tomb site – described in contemporary sources as a magnificent Hellenistic monument that included pyramids and ships of carved stone and could be seen by sailors on the Mediterranean Sea, 18 miles away. The complex was one of the greatest man-made landmarks in ancient Judea. No trace of it has ever been found. For the early archaeologists who arrived in Ottoman Palestine with shovels, Bibles, and a thirst for the physical traces of the events described in Scripture, the tombs were a tantalizing mystery. More than a century later, so they remain. Today, archaeologists have their eyes on a site that might — just might — provide an answer.

Many locals and visitors probably don’t realize there is a mystery at all. Off a road near the city of Modi’in in central Israel is a sign in English and Hebrew pointing unambiguously to the “Maccabean Graves,” and a path leads to 20 stone tombs cut deep into the rock on a nearby hillside. Prayers are held here every year on Hannukah, the holiday that celebrates the triumph of Mattathias the Priest and his five sons, who rededicated the Temple in Jerusalem in 165 BCE and established the Hasmonean royal dynasty. But while it is not clear precisely who was buried in these tombs, it is entirely clear that it was not the Maccabees. The graves are pagan or Christian, and were made centuries after the time of the Maccabees. First mistakenly linked to the Maccabees in the 19th century by a European explorer, the graves were later embraced by early Zionists as physical remnants of the ancient Jewish heroes they saw as role models. This is not exceptional: In modern Israel, religious sentiment, wishful thinking and a kind of cheerful disregard for the inconveniences of historical research have often led to grave sites being blithely misidentified, aggrandized and converted to Judaism. 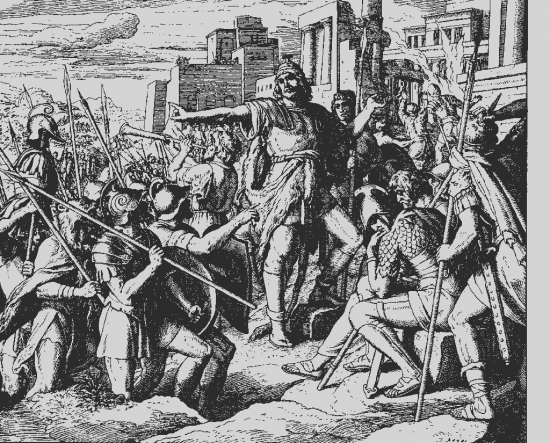 Written descriptions that survive from the time of the Maccabees make clear that this particular tomb complex did not resemble an ordinary burial cave. “And Simon built a monument over the tomb of his father and his brothers; he made it high that it might be seen, with polished stone at the front and back,” reads the description of the tombs in the Book of Maccabees, a text written in Judea several decades after the Maccabees’ revolt. Simon was a brother of Judah the Maccabee and one of the five sons of Mattathias. “He also erected seven pyramids, opposite one another, for his father and mother and four brothers. “And for the pyramids he devised an elaborate setting, erecting about them great columns, and upon the columns he put suits of armor for a permanent memorial, and beside the suits of armor carved ships, so that they could be seen by all who sail the sea. “This is the tomb which he built in Modi’in; it remains to this day,” reads the text. The historian Josephus Flavius, writing nearly two centuries later, recorded a similar description. For archaeologists looking for the tombs, those passages provide three crucial clues. The site, a reader learns, was located on high ground from which it was possible to see the Mediterranean. The original tomb contained seven bodies – those of Mattathias, his wife, and their five sons – as well as other scions of the dynasty who were added later on. And it was near Modi’in, the Maccabees’ hometown. The location of ancient Modi’in has been lost, but scholars agree that it was in the same area where the modern-day city of that name now stands.

The first flurry of interest in finding the lost tombs began in earnest in 1866, as biblical archaeology became popular in Europe. The name Modi’in, a French Catholic priest suggested that year, was preserved in the name of an Arab village in the area – al-Midiya. This is still largely considered to be a logical conclusion. The tombs, it stood to reason, could be found nearby. In 1869, another explorer came to the area asking about the tombs of the Maccabees, and local villagers pointed him to a cluster of ancient graves they called Qubur el-Yahud, or the “Jewish tombs.” Though these tombs matched none of the ancient descriptions – the sea was not visible, for example, and there were no signs of monumental construction – the explorer declared that he had found the site. This identification was never taken seriously by scholars, but it has nonetheless proved resilient, bequeathing to us the “Maccabean Graves” that are signposted along the road from Modi’in to Tel Aviv, misleading casual passers-by more than 140 years later. The next year, 1870, saw the arrival of another Frenchman, Victor Guérin, who was interested in a different location nearby — a site home to a domed Arab tomb of fairly recent vintage and known as Sheikh el-Gherbawy. Guérin discovered the remains of an ancient rectangular structure that was divided, he thought, into seven crypts. That, he noted, matched the correct number of tombs. His excitement rising, he went on to find pieces of stone that he identified as traces of the complex’s pyramids. Then he found fragments of bone and declared, in the enthusiastic archaeological style of those times, that these were no less than “the ashes of the heroic and holy old man Mattathias.” The next to arrive was Charles Clermont-Ganneau, a meticulous French scholar who would go on to author a classic 1896 text on Holy Land archaeology, “Archaeological Researches in Palestine.” He showed up at the same site the following year, having set out from Jerusalem in the rain on horseback with a French companion, a rubber raincoat and a revolver. “Palestine was devastated by famine, many peasants had died of hunger, and the roads were hardly safe,” he wrote. “We followed an ancient Roman way which here was easily recognizable with its pavement and its edging of large blocks still in a good state of preservation. We left it to turn northwards and direct our course to el Midieh.” 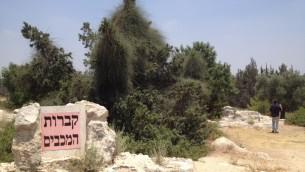 The site known as the ‘Maccabees’ graves’ contains pagan or Christian graves hewed into bedrock centuries after the time of the Maccabees (photo credit: Matti Friedman/Times of Israel)

Reaching Guérin’s site, he carried out a short excavation, then returned two years later with a work team and conducted a more extensive dig. He found a substantial building, but nothing he thought suggested any connection to the Maccabees. After several days of clearing rubble, he reached a mosaic floor, and when the dirt was cleared away the floor design was revealed – a Christian cross that could have been made no earlier than the fifth century CE. Far from being the Maccabees’ tombs, the building at Sheikh el-Gherbawy was almost certainly a Byzantine-era church or monastery, one of many in the area. The find, he wrote, directing a scholarly jab at his giddy predecessor Guérin, “naturally calls in question the too hasty conclusions which had been arrived at from insufficient observation.” During Israel’s War of Independence the same site – then known as Outpost 219, a small ring of trenches next to the old Arab tomb – was the scene of a battle between Israeli and Jordanian troops, and changed hands several times before it was recaptured by Jewish forces and remained on the Israeli side of the line after the armistice. The village of al-Midiya remained under Jordanian control, and is now under the jurisdiction of the Palestinian Authority. At some point, Jewish believers seem to have decided that the Ottoman-era Arab tomb at the site was in fact a Jewish holy place. A gravestone inside the building currently declares, with no apparent irony: “Mattityahu, son of Yohanan, the High Priest, is buried here.”

One hundred and twenty-nine years after Clermont-Ganneau’s visit, archaeologists are still looking for the tombs. Leading the search these days is Amit Reem, the Israel Antiquities Authority archaeologist in charge of central Israel. For a digger in this part of the country the Maccabees are nearly inescapable – the Holy Land’s archaeological mega-celebrities, King David and Jesus of Nazareth, lived elsewhere, and there are no greater ancient stars under his purview. And identifying their graves would also serve a second purpose — helping scholars to conclusively identify ancient Modi’in. 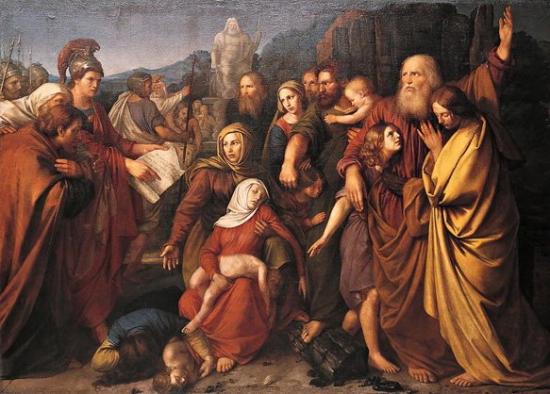 In recent years, interest in the area’s history has grown along with the influx of residents into the city of Modi’in, a tidy middle-class suburb of 80,000 built from scratch on hills that were empty until the 1990s. In 2000, archaeologists excavating outside a new neighborhood found a Hasmonean-era Jewish village centered on a synagogue, and some raised the possibility that this was ancient Modi’in and that the famous tombs could be nearby. No evidence has been found to support that idea. A few years before, a bulldozer clearing the way for a new road near the city accidentally uncovered a 2,000-year-old burial cave with stone ossuaries, one of which seemed to bear lettering that suggested the word “Hasmonean.” This led to another burst of public interest, though the inscription had been misread and the grave could not be linked to the Maccabees – ossuaries were used by Jews for burial only more than a century after the Maccabees’ lifetime. Others have suggested a possible link to a high point near the city known as Titura Hill, where a Crusader fort sits atop the ruins of a large and as yet unidentified Roman-era building. Nothing on the hill, however, suggests a link to the tombs. All of which has led Reem and other modern scholars back to the same site that drew the interest of the French diggers all those years ago. Though Clermont-Ganneau conclusively established that the structure at Sheikh el-Gherbawy was Christian – the mosaic cross left no doubt about it – his finding might actually strengthen the possibility that the tombs are there, Reem said. Early Christians saw the Maccabees as martyrs and would certainly have venerated their graves, he believes: In this version, the structure could have been constructed atop the lost tombs to mark their place. In 2009, Reem made an effort to clean and investigate the site. Many of the remains the Frenchmen had seen all those years before had been long since looted, but the team used radar to peer under the ground and detected massive walls and subterranean chambers of considerable size. The site, he noted, has remains of monumental construction; proximity to al-Midiya, which has the best claim to be ancient Modi’in; and a clear sightline to the sea. In other words, it would seem to match the criteria from the ancient writings. Since then, Reem has been trying, without success, to drum up funding that would allow the site to be properly excavated for the first time. “Neither I nor my colleagues are saying that this is the site of the tombs, but it’s the leading candidate,” he said. “Only a large, methodical excavation would prove or disprove the idea and solve the riddle of this place.”