The Minoans were a remarkable people with a civilization far advanced for its time in many ways with artwork and palaces replete with riches beyond description; now, we know that their diet was as rich and varied as their physical culture, much of which survives to this day.

Evgenia Tsafou of the Aegean Interdisciplinary Studies Group of UC Louvain and Juan José García-Granero of Oxford and of the Human Ecology and Archaeology Research Group of Barcelona have published a paper on this fascinating subject.

Appearing in the Journal of Archaeological and Anthropological Sciences, the new study builds on previous investigations into the diet of the Minoans by analyzing grains found in vessels at two Minoan sites on Crete, Sissi, and Malia.

The cooking and storage pots in question were from the Minoans’ “neopalatial,” “final palatial” and “post-palatial” periods, representing the time from 1700 to 1100 BC.

There is much that had been unknown until recently about the Minoans and their Greek-mainland counterparts, the Mycenaeans, including their very origins. A paper published in the journal Nature in 2017 put much of these uncertainties to rest, showing that, in fact, their ancestors had been people from Neolithic western Anatolia and Greece, and modern Greeks are indeed descended from them.

The Minoan civilization, including Mycenaeans who lived on the Greek mainland, were the first literate societies of Europe. They are considered to be cultural ancestors of later Classical Greece.

Scholars now believe that the cataclysmic eruption of the volcano of Thera (the modern-day Greek island of Santorini) destroyed much of Minoan civilization and hastened its downfall.

The scientists’ new findings shed light on just how advanced the Minoans were in every aspect of life when their civilization was at its peak. This is also obvious in their use of imported spices that had originated from Western Asia and “tiger nuts,” which are roots cultivated in Egypt and elsewhere in Africa.

Tsafou and García-Granero found traces of these nuts—actually considered to be tubers and also known as nutsedge (Cyperus esculentus). The Minoans used them in making a nut bread.

These nuts were apparently cultivated as a staple in ancient Egypt and are still eaten raw or cooked even today throughout parts of Africa and the Mediterranean region.

The remains were from the towns of Sissi and Malia, which were both continuously occupied from about 2,600 to 1,200 BC, and both also had some palatial buildings along with those occupied by ordinary people. Scientists state that the food samples collected show a full representation of the material culture of Minoan society at that time. 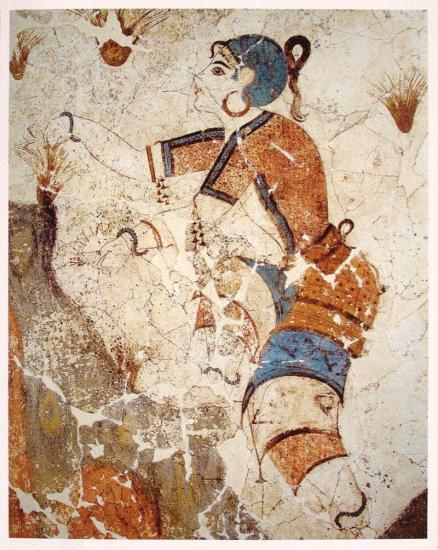 A detail of a fresco detail from the “Saffron Gatherers” fresco of the “Xeste 3” building. It is one of many depicting saffron. T\\hey were found at the Bronze Age settlement of Akrotiri, on the Aegean island of Santorini. Credit: Wikimedia Commons

Naturally, the archaeologists also found traces of basic cereals, such as wheat and barley, which were widely cultivated then, as well.

Of course, the starch analysis undertaken by Tsafou doesn’t include evidence of meats that Minoans are already known to have consumed, such as sheep, goats, and some pork. In addition, she says, they would have hunted wild animals.

Minoan Linear B tablets have occasional references to herbs and condiments, but the only macro-botanical evidence of these until very recently has been exactly two coriander seeds, according to a report from Haaretz. However, Tsafou and García-Granero’s new analysis also detected cumin in the Minoans’ pots.

There has been little archaeological evidence found for using cumin in the prehistoric Aegean, but records do reference its use there for cooking during the Bronze Age. In addition, its oil was utilized in various traditional treatments that are purportedly medicinal in nature.

Tsafou and her colleagues found just a dash of cumin in the Minoan pots in the two towns. Finding these traces of the exotic spice—grown in what are now India and Iran—came as a surprise because its presence had not previously been documented in any previous archaeobotanical materials from the Minoan civilization.

If there had in fact been any of the spice detected before, the archaeologist says they would have been found as burned seeds.

A Linear B tablet from the Mycenaean palace of Pylos. This piece contains information on the distribution of bovine, pig, and deer hides to shoe and saddle-makers. Linear B was the earliest Greek writing, dating from 1450 BC, an adaptation of the earlier Minoan Linear A script. The script is made up of ninety syllabic signs, ideograms, and numbers. This and other tablets were fortuitously preserved when they were baked in the fire that destroyed the palace around 1200 BC. It is on display at the National Archaeological Museum of Athens. Credit: Sharon Mollerus /CC BY 2.0

The archaeological preservation of cumin seeds is difficult because the seeds are so tiny, but the recent study detected their presence. Furthermore, Tsafou and her colleagues determined that the precious spice, which must have been exceedingly expensive, had been used in recipes.

The cumin used by Minoans may have been imported from the Eastern Mediterranean from  Mycenae, on the Greek mainland, although it may have been directly imported to Crete itself. Archaeological records of human history have repeatedly proven that long-distance trading preceded recorded history, so the use spices from faraway lands is absolutely not beyond the pale with the Minoans.

Cumin, according to a scholarly paper published by Israel’s Bar-Ilan University, was likely brought to the southern Levant by the Philistines, who, as seen in recent research, may have been of Greek origin themselves.

Additionally, as other researchers have found, the Phoenicians, a group that was an ancient maritime powerhouse, were most likely responsible for importing cinnamon from Southeast Asia to the Levant. Clearly, international spice trading was possible far back into antiquity; the presence of cumin in Minoan Crete now appears to be part of that ancient trade.

A vase with Linear A writing on it, possibly describing its contents. Credit: Portum /Creative Commons Attribution-Share Alike 3.0 Unported

Linear B tablets found on Crete have mentioned coriander, sesame seeds, fennel bulb, mint, and parsley; clearly, the Minoans ate well and sumptuously. Anyone who has seen Minoan frescoes at the palace of Knossos has seen the striking figure of women gathering saffron from crocuses, which are still widely cultivated in Greece.

Asked just how much credence we can give the information on these tablets, Tsafou says “It is very secure and accepted in the research community that the interpretation is correct and that Linear B is the ancestor of the Greek language used by the Mycenaeans.”

Linear B was the writing system used on the mainland of Greece and Crete during the Bronze Age. It was first deciphered in 1953 by cryptographer Michael Ventris after groundwork laid down by Brooklyn College classicist Alice Kober.

Ventris declared Linear B was indeed the written form of an early permutation of the Greek language. Now, linguist Dr. Esther Salgarella has made the link between Linear A and Linear B as a result of her new analysis.

Linear A script carried over into Linear B

Minoans used a crude syllabic system known as Linear A from about 1800 to 1450 BC. Over one thousand tablets written in Linear A have been found.

Around 1,600 BC, Linear A was borrowed from the Minoans by the Mycenaean Greeks and Linear B is the Greek Mycenaean dialect used in administration of not only the Mycenaean palaces of Crete but also in Thebes, Myceanae, Pylos, and Tiryns on the Greek mainland.

Parallels between signs in Linear A and B have indeed previously been identified, but Dr. Salgarella has now shown that a great many graphic variants of signs in the Minoan script were carried over into Linear B.

Tragically, in approximately 1200 BC, the great civilizations around the Mediterranean became nearly extinct—perhaps as a result of the eruption of the volcano, Thera, which had cataclysmic effects on their population and cultural systems. Both systems of writing had become extinct by approximately 1100 BC.

We have two archaeologists to thank for much of what we know about the Minoans today. Amateur archaeologist Heinrich Schliemann, who discovered Troy, was certain that a major Minoan palace lay hidden in the vicinity of Heraklion, but the Ottoman authorities who still ruled Crete at the time did not grant permission to dig there.

Years afterwards, the British archaeologist Arthur Evans, inspired by Schliemann’s ideas, reached Crete to negotiate the purchase of a portion of land in Knossos.

He began excavations in 1900, and in a matter of days, found enough clear evidence to indicate the presence of a huge palatial complex.

Controversial restoration projects have taken place thanks to Evans’ personal ownership of the site. He was the one responsible for naming the civilization “Minoan” after the legendary king Minos of Greek mythology.