Minnesota lake (USA):region of giants that once roamed the land

Legends have filtered down through the Minnesota lake region of giants -- 7- to 8-foot-tall humans -- that once roamed the land. 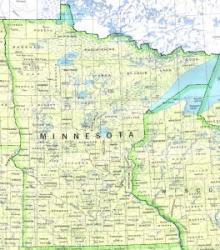 There is a belief among some in the upper Midwest of the United States, mostly in Minnesota, that not only did Leif Erikson find America before Columbus and establish an outpost in what is now Newfoundland in Canada but that at least one or more bands of explorers made it as far west as the Minnesota area. On "America Unearthed," forensic geologist Scott Wolter set out to see if he could establish some kind of linkage between the legends and historical and/or archaeological fact.

On the episode "Giants in Minnesota," Wolter was contacted by a northern Minnesota farmer, a Roger Saker, who tells the researcher that years before he had stumbled across some bones that he believed belonged to a giant human. Saker produced a copy of a nearly 200-year-old newspaper article describing the findings of giant skeletons. He also told Wolter that at the time, when he had unearthed what looked to be human bones, he brought in state and Native American experts to asses the find. Saker said that among the bones, there were three sets, he had personally seen a one huge specimen that in no way resembled the smaller bones and felt that the archaeologists had unearthed a giant. However, the bones were secreted away and the find kept quiet. Helped in this regard was the fact that the Native American bones made it a sacred site and it could not be disturbed greatly without proper authorities and experts notified and on hand, not to mention undergoing tons of bureaucratic red tape. But even Saker had kept mum about the site, although he noted that he wasn't completely sure why he had done so. But he wanted Wolter to take a look at his land and see if he could find any evidence that there had once been a giant on his land.

They first brought in a neighbor, a diviner, who practiced the arcane art of "witching" or "dousing," using copper divining rods to find things underground. Wolter admitted his skepticism, even tested the diviner, who successfully discovered a knife Wolter plunged into the soil. Somewhat mollified, Wolter allowed the divining to continue and the wands crossed several times on Saker's property.

Wolter then brought in an archaeologist, who also marked off quite a few areas where there appeared to be pieces of metal or solid objects buried on the farm.

And the digging began...

While there, Wolter is apprised of a sword unearthed on a farm not far away. The sword had as yet not been authenticated but the family that had discovered it was willing to meet with Wolter and discuss the artifact. The Hildes, Bev and Dave (owners of sword since it was unearthed on their land), gave the sword into Wolter's safe-keeping to test, but before he left, they informed him of a massive stone in the area that had been used for foundation rock for a man's home -- and the stone had runes on it.

Of course, this piqued Wolter's curiosity. Wolter had worked on identifying the geological provenance of the Kensington Runestone in 2000 and had come to believe that the massive etched stone was not a hoax -- something that many academicians and experts had maintained over the years. The runestone also had been discovered in Minnesota and was part of the evidence that set Wolter on his quest to establish a more complete history of pre-Columbian America.

In the end, the geologist would find some deep scratchings on a rock that looked as if it had come from the same source stone, but admitted that those markings looked as if they could have been made by dragging or machines when the rock was cut and broken to be used for the foundation of the house (which was torn down during the investigation, giving Wolter easier access to what was an unsafe, dilapidated structure). As for the Nordic sword, an expert at the Oakeshott Institute in Minneapolis found that it wasn't Nordic at all but made by the thousands in Germany in the late mid to late 1800s. A photo of a nearly identical model of the sword was produced.

Nothing indicating ancient Nordic travelers or Viking explorers had come to Minnesota...

(An interesting aside: Wolter mentioned that the legends, not just the Scandinavian heritage of the region's populace, was what prompted the naming of the NFL football franchise in the state the Vikings. As it stands, though, the Vikings are in Minnesota, the Giants are in New York.)

Back at the Saker farm, the archaeologist and Saker himself had done considerable digging (Wolter had been on hand to help a few times as well). They found animal and human bone fragments and lots of pottery shards the archaeologist was sure was Native American. However, they found no evidence of intact skeletal remains.

So Wolter went to the people who had come all those years ago to Roger Saker's farm and taken the bones away. They, of course, knew nothing about any denial of claims of giant bones. The gentleman Wolter spoke with admitted he had never seen any overly large bones and that those involved in the investigation said they had not seen nor disinterred any large, or giant, bones as Saker described. All bones, he said, were Native American, the largest set being 5' 3" in total height.

Certainly not a giant.

Wolter brought the news back to the Saker farm, whereupon Saker admitted his disappointment and stated he knew what he saw that day so many years ago -- and those bones belonged to no normal-sized human being, of that age or any other. He couldn't understand why they were trying to hide what had been found. But Wolter could understand, having butted heads with academics and experts over the years because of the Kensington Stone.

And so concluded Scott Wolter's investigation into the giants of Minnesota -- for the present...

If nothing else, the History 2 Channel series "America Unearthed" will make you question and ponder the American historical timeline that was learned in school. You might not replace it with the newly acquired information, but some of the information provided on the show will certainly make one question the existing catalog of events, people, places, and things that make up what is believed about the past. And either way, it is fascinating stuff. The show is also a neat observation into the workings of academia, where the established ideas are difficult to dislodge and new information is greeted with marked skepticism, sometimes even with derision and outright dismissal.

But science is not solely tradition (although tradition certainly plays a part in the advancement and methodologies of science). True science is a method of finding empirical truth, not allowing the circumstances to fit a preconceived model or theory. But history is more of an amorphous entity, where interpretation of artifacts and events can have a strong hold on what is believed to be true. With forensic geologists and other scientists working alongside archaeologists and historians, a more accurate historical record can be constructed. But only if they choose to cooperate...