Archaeologists rate the ruins of Hisham's Palace, decorated with stucco and elaborate mosaics, as an architectural gem from the caliphate era that followed the death of Prophet Mohammed. 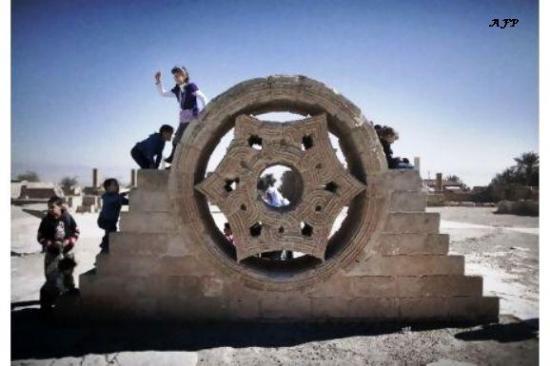 Children play at the site of Hisham's Palace in the West Bank, near Jericho. It and many other important archaeological sites in the Middle East are in need of repair and preservation. Marco Longari / AFP

The West Bank complex of thermal baths, mosque and winter retreat survived an earthquake in the 8th century and hundreds of years hidden under sand - but could now face its greatest threat as the nearby city of Jericho sprawls southwards.

Heritage experts warn that Hisham's Palace and many other sites across the Middle East and North Africa are succumbing to developers, looters, tourists and bad management and warn that the region may lose some of its most valuable assets.

Jeff Morgan, executive director of the Global Heritage Fund, will launch a website this month that lists 50 endangered sites from the region, including 15 that are so threatened by development and other hazards that they need rescue.

Mr Morgan said: "There are only a few historic districts of Arab towns and cities that remain intact. This is a lost opportunity in terms of drawing tourists and benefiting local economies. Damascus is going the way of Cairo with little regulation or enforcement, and Tripoli, one of the prized historic districts in northern Lebanon, only has a few streets of historic fabric remaining."

Egypt's revolution showed how heritage can suffer in turbulent times, with looters taking a gilded Tutankhamun statue and other artefacts from the Egyptian Museum as protesters massed in the nearby Tahrir Square, the focal point of the uprising.

Mr Morgan's warning comes against a backdrop of growing interest in conservation in the Gulf. Saudi Arabia won its first listing on the list of UN World Heritage Sites in 2008, when the Nabatean tomb complex at Madâin Sâlih was added.

In June, UAE officials will appear before a UN heritage panel to try to secure the country's first listing, arguing that the oases, tombs and irrigation systems of Al Ain meet the requisite criteria of having "outstanding universal value".

While Gulf nations are "oil-rich" they are "archaeology-poor", Mr Morgan says. The region's most impressive sites are found in Yemen and Iraq, as well as the obvious examples of Egypt and Jordan - famous for the pyramids and Petra, repectively.

"We want to mobilise capital that's available in wealthy countries to help poorer ones improve conservation and focus on responsible development and long-term protection," he said. "Countries like Yemen, Algeria and the Palestinian territories have some of the region's historical gems but struggle to maintain them and need help from their neighbours and conservation groups."

Experts propose the creation of a regional fund to allocate cash and grants for renovation schemes across the Middle East and North Africa, comparable to the work of the Inter-American Development Bank in Latin America.

In recent years, the bank has allocated funds to revitalise the historic parts of Ecuador's capital, Quito, train conservators to preserve sites in Brazil, and help Chile maintain its national monuments.

Those concerned with preserving historical sites praise mounting interest in the GCC, but also highlight perils of the construction boom in some Gulf cities, notably the new skyscrapers around Saudi Arabia's holy Grand Mosque, which many critics call the "Manhattanisation of Mecca".

The market sits only metres from the Gulf shoreline and played a vital role in pearl trading until the 1930s, when the pearl trade crashed.

Spices, sweets and clothes are still sold beneath its wooden beams, but there are plans to raze the site and build an up-market shopping mall.

Meanwhile, archaeologists focus on the Arabian peninsula's less-obvious sites, including Stone Age settlements from the UAE and Oman that indicate early man migrated from eastern Africa across the Red Sea thousands of years earlier than was previously thought.

Details of a discovery of stone tools at Jebel Faya, in Sharjah, were published in the US journal Science in January and suggest that humans migrated from Africa 125,000 years ago, about 60,000 years earlier than other studies have suggested.

Gaetano Palumbo, regional director for the World Monuments Fund, said heritage financing from the oil-rich Gulf could be administered through a regional body that would deliver returns to investors in forms other than merely cash.

"A regional centre or agreement would provide a way to share expertise," he said. "Some of these sites would be excellent places for training staff in various techniques of archaeological preservation and become schools for new generations of site conservators for the region."

Mr Morgan points to the burgeoning regional tourism market, which the UN says grew by 14 per cent, reaching 60 million visitors last year. The UN stresses that restoring and managing sites benefits local industries, such as tourist-guide services, hotels and eateries.

Archaeologists point to the restoration of Iraq's ruins of Babylon to demonstrate how relatively small grants can achieve impressive results.

The project, undertaken by Iraqi officials and the World Monuments Fund, has helped restore the Ishtar Gate, part of the site of the legendary Hanging Gardens, one of the seven wonders of the ancient world.