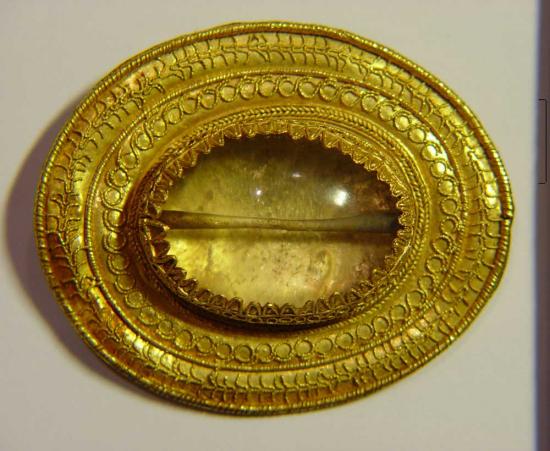 The burial of the warrior was richly adorned and contained more than a dozen gold artifacts. This fibula-brooch, despite being only 2.3 by 1.9 inches in size, contains intricate decorations leading towardthe center where a rock crystal bead is mounted. CREDIT: Photo courtesy Valentina Mordvintseva

Hidden in a necropolis situated high in the mountains of the Caucasus in Russia, researchers have discovered the grave of a male warrior laid to rest with gold jewelry, iron chain mail and numerous weapons, including a 36-inch (91 centimeters) iron sword set between his legs.

That is just one amazing find among a wealth of ancient treasures dating back more than 2,000 years that scientists have uncovered there.

Among their finds are two bronze helmets, discovered on the surface of the necropolis. One helmet (found in fragments and restored) has relief carvings of curled sheep horns while the other has ridges, zigzags and other odd shapes. 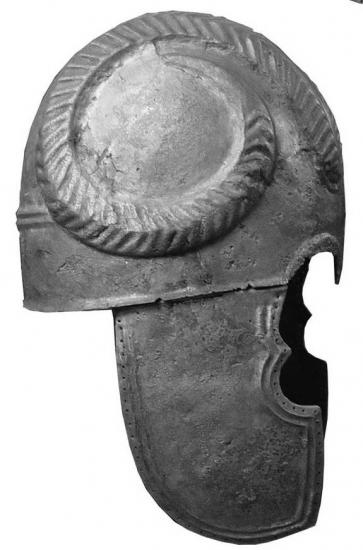 This bronze helmet, found on the surface of the necropolis, depicts curled sheep horns carved in high relief. It is more than 7 inches long and 6 inches wide. It was found in fragments and had to be restored. Credit: Photo courtesy Valentina Mordvintseva 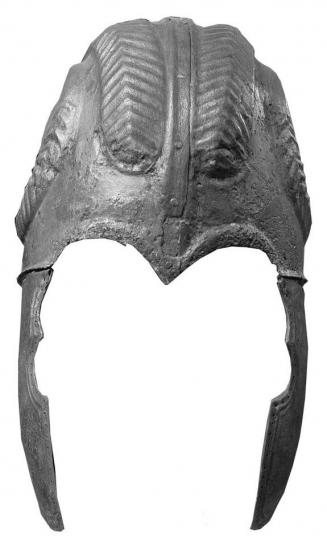 The front of the helmet showing the curled sheep horns. While the helmet could have been worn in battle it's more likely it was meant for a burial. Credit: Photo courtesy Valentina Mordvintseva 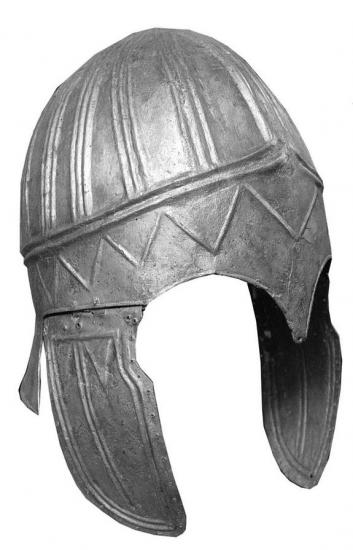 This bronze helmet was also found on the surface and depicts zigzags, ridges and other shapes hard to put into words. It is more than 8 inches long and 6 inches in width. Credit: Photo courtesy Valentina Mordvintseva

Although looters had been through the necropolis before, the warrior's grave appears to have been untouched. The tip of the sword he was buried with points toward his pelvis, and researchers found "a round gold plaque with a polychrome inlay" near the tip, they write in a paper published in the most recent edition of the journal Ancient Civilizations from Scythia to Siberia. 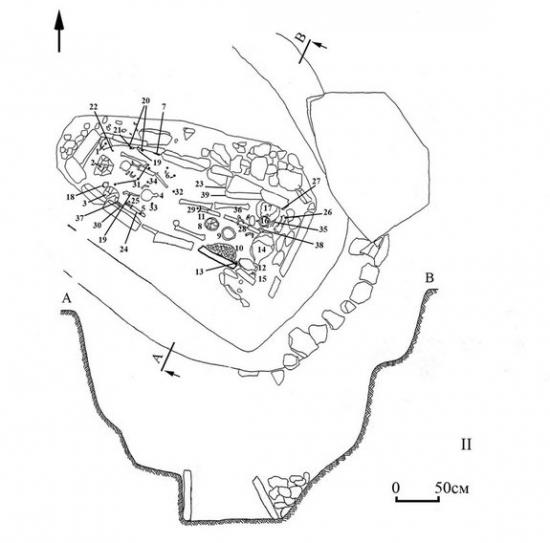 The grave of a male warrior who was laid to rest some 2,200 years ago in what is now the mountains of the Caucasus in Russia, shown here in a diagram of the warrior's skeleton and numerous artifacts. CREDIT: Courtesy Valentina Mordvintseva

The remains of three horses, a cow and the skull of a wild boar were also found buried near the warrior.

The warrior was buried with gold jewelry, numerous weapons and three horses and a cow (1-3 and 4, respectively). Credit: Courtesy Valentina Mordvintseva

"These animals were particularly valuable among barbarian peoples of the ancient world. It was [a] sign of [the] great importance of the buried person, which was shown by his relatives and his tribe," wrote team member Valentina Mordvintseva, a researcher at the Ukrainian National Academy of Sciences Institute of Archaeology, in an email to LiveScience. The animal bones and pottery remains suggest that a funeral feast was held in his honor.

Without written records it is difficult to say exactly who the warrior was, but rather than ruling a city or town, "he was rather a chief of a people," Mordvintseva said.