Mexique : Yucatan archaeology races to keep up with development 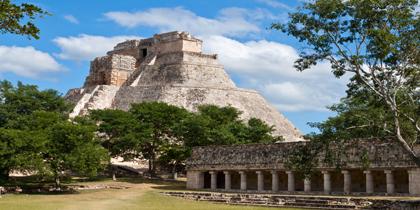 Mexican archaeologists said Tuesday they are racing to keep up with development on the Yucatan peninsula as suburbs of the colonial city of Merida swallow Maya settlements.
Fed by an increasing number of U.S. retirees, some Merida suburbs are expanding at a rate of 7 percent a year, especially to the north and south of the city, which was known in the Mayan era as T'Ho.

Yucatan state has over 3,500 known archaeological sites but just 22 government archaeologists. While attention focuses on big ruins like Chichen Itza or Uxmal, only about 17 of the state's sites are even open to the public.

"There is never going to be enough money to recover the 3,500 sites in Yucatan, impossible," said Jose Huchim, an archaeologist who works for the National Institute of Anthropology and History, the INAH.

One option is to leave the sites undisturbed.

"As long as humans don't touch the relics, they will last thousands of years," Huchim said. "Let's not eat all the cake at once. I'm of the opinion we have to leave something for the future generations of archaeologists."

But sometimes a housing development is planned on top of a ruin site, often a smaller Maya satellite settlement that might contain dozens of houses and a few raised temple platforms.

When that happens, archaeologists have to rush in to save what they can, often marking off spaces to conserve some foundations at the site while removing relics like pottery and jewelry for further study or display.

Huchim recalls one out-of-state developer who bought a piece of land on the outskirts of Merida hoping to build houses—and found out there were the foundations of about 170 Mayan-era structures on the property, including 10 temple platforms. He persuaded the businessman to preserve some of the temple mounds as part of the parks area of the housing development, and the developer got so excited he decided to give Maya names to the streets.

"This could be part of the 'plus' for your development," Huchim said he told the builder.

When they have to save artifacts, archaeologists do "rescues"—quick digs before commercial construction begins.

They say they have turned up fascinating details about daily life among Maya commoners, precisely because they have been digging in the suburbs. Colonial-era development in Merida's center, founded in 1542, erased many of the Maya vestiges from the area's thin soil. But on the outskirts, remains have been found dating from about 900 B.C. to about the time of the Spanish conquest.

INAH archaeologist Luis Pantoja said digs on the outskirts have turned up the foundations of commoners' houses, which were at first round, then square or rectangular. The "traditional" Mayan oval-shaped house, which is believed to maximize airflow in the extremely hot climate, wasn't developed until later.

Only the stone foundations of the ancient houses are left, because the upper part of the homes were made of perishable materials like wood, mud, reed or thatch.

Rafael Burgos, another government archaeologist, noted that as difficult as the situation is in Merida, at least the city government requires an archaeological survey before building permits are granted. In the rest of the state, such rules often don't exist.

"Many of the building projects in outlying towns aren't even reported" to the government history institute, Burgos said.

The experts rely on the awareness of Yucatan's residents, many of them modern-day Mayas, to alert authorities.

"We learn about it from members of the communities, who make anonymous calls to report: 'They're building at such-and-such a site'," Burgos said.