Researchers in Mexico City have unearthed a ceremonial platform which they hope will aide in the search of an emperors' tomb.

Archaeologists in Mexico City have unearthed a ceremonial platform which they hope will aide in the search of an emperors' tomb. 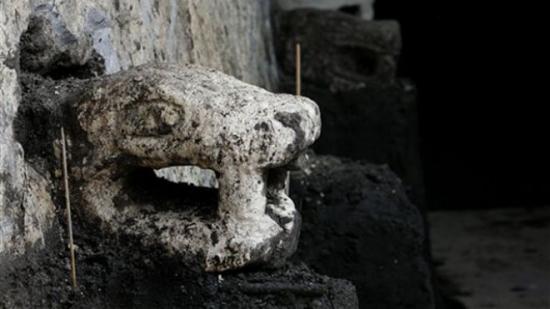 A figure in the shape of a serpents' head decorates a newly discovered platform at the archaeological site Templo Mayor in Mexico City, Mexico, Thursday Oct. 6, 2011. Archaeologists say they've found a round stone Aztec ceremonial platform studded with carvings of serpents' heads at Mexico City's Templo Mayor ruin site. Archaeologist Raul Barrera said Thursday that records written before the arrival of the Spanish indicate such platforms were the site of royal cremations. ( AP Photo/ Marco Ugarte)

The platform studded with stone carvings of serpent heads is located in the City's Templo Mayor ruin.

No Aztec ruler's tomb has ever been located and researchers have been on a five-year quest to find a royal tomb in the area of the Templo Mayor, a complex of two huge pyramids and numerous smaller structures that contained the ceremonial and spiritual heart of the pre-Hispanic Aztec empire.

Mexico's National Institute of History and Anthropology said the stone platform is about 15 yards (meters) in diameter and probably built around A.D. 1469.

The site lies in downtown Mexico City, which was built by Spanish conquerors atop the Aztec capital of Tenochtitlan.

"That is what the historical sources say," he said, referring to accounts written by Roman Catholic priests who accompanied the Spanish soldiers in the 1521 conquest. "Of course, now we have to find archaeological evidence to corroborate that." 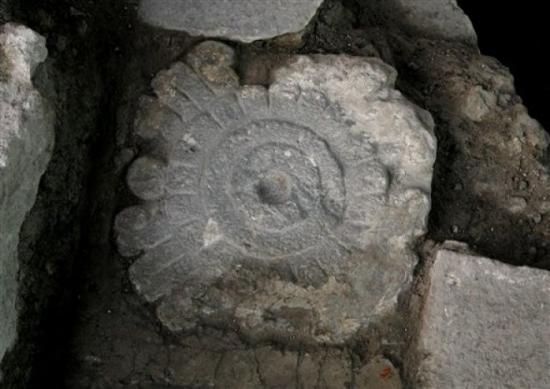 He said the platform, which is still being unearthed, was gradually uncovered over the preceding months. It is covered with at least 19 serpent heads, each about a half-yard (meter) long.

Barrera said accounts from the 1500s suggested the platform was also used in a colorful ceremony in which an Aztec priest would descend from the nearby pyramid with a snake made of paper and burn it on the platform. 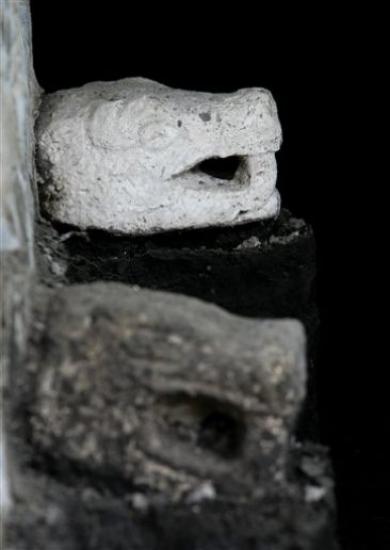 Records indicate there were a total of five such platforms in the temple complex. One was found several years ago, but that platform was farther from the ritually important spot at the foot of the pyramid, where the most recent finding was made.

In 1997, archaeologists using ground-penetrating radar on a site very close to where the latest stone platform was found detected possible underground chambers that they believed at the time might contain the remains of Emperor Ahuizotl, who ruled the Aztecs when Columbus landed in the New World.

Subsequent excavations turned up a sort of stairway leading down and lots of ritual offerings of shells, animal bones and pots, but no tomb.

Archaeologists agree any such find would be very significant.

"This would be quite an important find for Aztec archaeology," said Michael Smith, an archaeologist at Arizona State University who is not connected to the dig. "It would be tremendously important because it would be direct information about kingship, burial and the empire that is difficult to come by otherwise."

He says the find shows that "archaeologists are inching closer and closer to finding an Aztec royal tomb."

Based on reporting by The Associated Press.