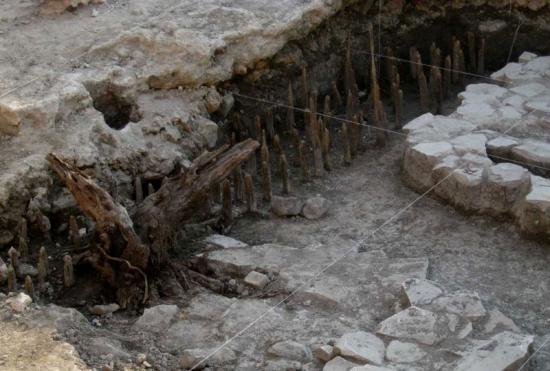 Raúl Barrera Rodríguez also explained that besides the osseous remains, a circular structure of tezontle was found. It contained a log which, determined by its location, should have belonged to one of the sacred trees associated to the Huitzilopochtli tributary temple. Photo: Raul Barrera.
A 500 year old burial, with the complete skeleton of an individual, surrounded by more than a thousand human bones of children, teenagers and adults, was found recently by specialists from the National Institute of History and Anthropology (INAH – Conaculta) in the Historical Center of Mexico City, close to the Great Pyramid of Tenochtitlan. 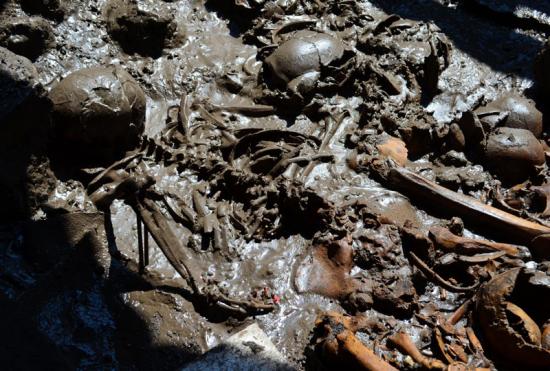 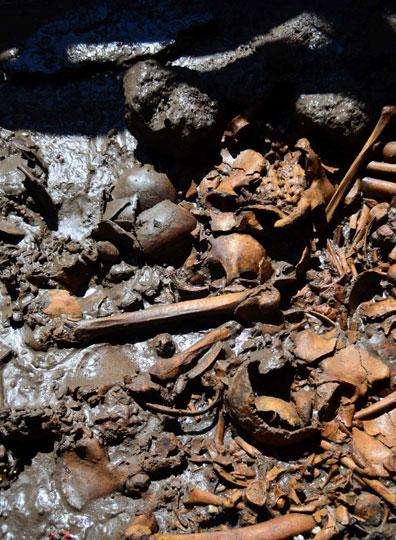 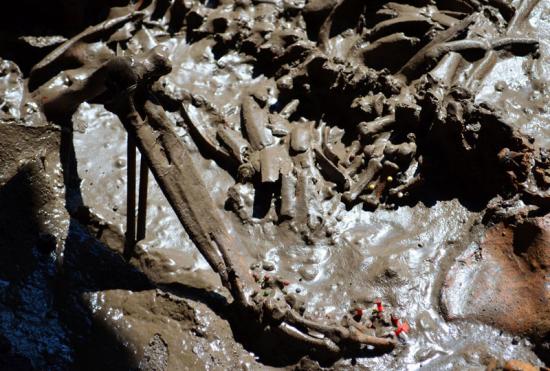 This finding is unique, claimed the archaeologist Raúl Barrera Rodríguez, who is responsible for the Urban Archaeology Program (PAU) of the INAH. There had been other multiple burials before in Mexican culture, but this is the first one in which the main skeleton was found accompanied by osseous human pieces of different age groups. Raúl Barrera Rodríguez also explained that besides the osseous remains, a circular structure of tezontle was found. It contained a log which, determined by its location, should have belonged to one of the sacred trees associated to the Huitzilopochtli tributary temple, and given its circular platform –found in 2011– it was determined that it is one of the five cuauhxicalco (ceremonial buildings) that were held in the sacred area of Tenochtitlan. The discoveries occurred during the work that was being done in a property named Plaza Manuel Gamio for the creation of an access hall to the Archaeological Zone and the Great Temple’s Museum. 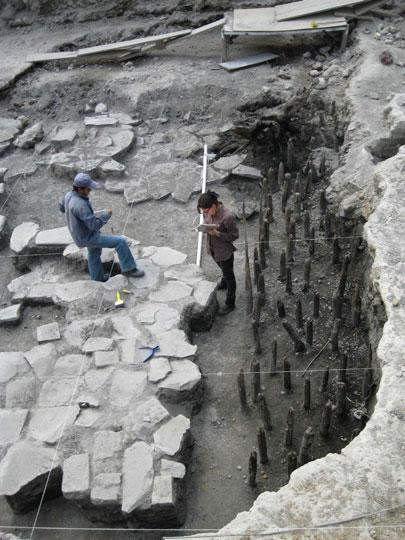 The burial was discovered approximately five meters (16.4 feet) underneath street level, under a basalt sandstone floor which can be identified as the fifth stage of the Great Temple’s construction, a period covering from 1481 to 1486, which is why specialists estimate that the remains belong to the same period. “The bones were placed directly over the earth; the complete skeleton was found in the west side of the funerary space –about 1.9 m long (6.23 ft) and 65 cm wide (2.13 ft), so that the remains were surrounding it, some of the bones formed small groups, such is the case of the ribs and the femurs”, described archaeologist Raúl Barrera. Perla Ruiz, the physical anthropologist in charge of the excavation added that the complete skeleton belongs to a young woman, which was determined by the shape of the cranium and pelvis. She indicated that after the extraction of the bones was completed, there were a total of 1,789 bones, within which 10 craniums were identified, three belonging to children and seven to adults. Also there were vertebras and sternums with possible cut marks. Judging by the quantity of the osseous pieces, investigators believe that they were exhumed in that epoch from somewhere else, which will be determined with detail in further studies. The specialist said that all the bones were sent to the Physical Anthropology Laboratory of the Great Temple Museum, where they will be subject to osteological analysis to determine aspects such as the exact number of individuals that made up the offering, each of their genders and age, pathologies and marks that determine the type of activities to which they were dedicated to in life.