Archaeologists and volunteers with the Crow Canyon Archaeological Center embark on a promising new investigation and excavation of a site in Colorado -- a site that may hold answers to questions about the beginnings of the great Pueblo cultures of the American Southwest. 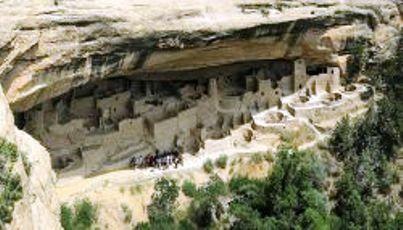 The majestic remains of Mesa Verde stand as icons to the legacy of the Pueblo Indians of the American Southwest. Anyone visiting them or the many other Pueblo sites that dot the picturesque desert landscape of the American Four Corners region and the southwestern states cannot help but walk away impressed. But who really built them, where did they come from, and what is their story? Archaeologists of the Crow Canyon Archaeological Center now hope to find answers through major new investigations at a promising site in Colorado.

Called the Dillard site, it is located in the central Mesa Verde  region in Colorado and is described as a ceremonial center that dates from the 7th century A.D.. Based on surveys and test excavations, the site includes evidence of a "great kiva" (a room used by Pueblo Indians for religious purposes) measuring 10 meters in diameter and 1 meter deep, and at least several smaller structures called "pit-houses" (a dwelling dug into the ground). The test excavations revealed the kiva to be one of the oldest public buildings in the Mesa Verde region. The site was first recorded during a survey in 1991 by Woods Canyon Archaeological Consultants (WCAC) preliminary to the construction of a private residential community. That survey also revealed evidence of more than 120 other pit-houses surrounding the core Dillard site, making the Dillard site and surrounding area one of the largest clusters of remains from this time period.

Says Dr. Shirley Powell, Vice President of Programs at the Crow Canyon Archaeological Center, "This new study will shed light on a pivotal, but under-investigated and poorly understood time in Pueblo history: the Basketmaker III period (AD 500 - 750). This period saw rapid population growth in the Mesa Verde region. The population boom ushered in an era of great technological advances and social change. For the very first time, the people of the Mesa Verde region began building large public buildings called great kivas."  For the prehistoric pueblo people, kivas were designed as gathering places for the community, where ceremonies and other public events could be carried out in a central location.

Excavations will include a systematic uncovering and exploration of the great kiva site at Dillard, as well as 8 to 12 smaller Basketmaker III habitation sites in the surrounding area.  Through study and analysis of the recovered artifacts and revealed structures, the Crow Canyon team hopes to be able to answer some key questions about this time period that have escaped archaeologists for years, including where the people came from and how they made the transition from a foraging society to an agricultural society.

An important but noteworthy element of the investigations will involve extensive public participation. Says Powell:

"The public is encouraged to make a lasting contribution to the understanding of the Basketmaker III period by joining the Crow Canyon Archaeological Center for an archaeology program......adults, families, educators and students will have the opportunity to work side-by-side with Crow Canyon archaeologists and educators in the field and lab, investigating this pivotal time in Pueblo history."

A detailed article about the Dillard site story and its significance will be published in the June 2011 issue of Popular Archaeology Magazine.