A grand, sandstone-walled pit in Mesa Verde National Park has for decades been seen as an achievement of prehistoric hydrology, part of a system of cisterns and canals used by Ancestral Puebloans to harvest rainwater on the arid plateau as much as 1,100 years ago.

Cowboys who watered their horses at the pit in the 19th century called it Mummy Lake.

In 1917, government ethnologist Jesse Walker Fewkes cemented the more official interpretation of the site, deeming it a “prehistoric reservoir.”

But a new analysis of the feature finds that, while it may catch runoff from time to time, Mummy Lake wasn’t built for holding water.

“Fewkes did suggest it was a reservoir,” said Dr. Larry Benson, lead author of the new study, in an interview. “But I think there’s always been a problem with that [interpretation].”

Instead, Benson says, the pit known as Mummy Lake was more likely designed and used as a ceremonial structure, similar to the roofless kivas and plazas found elsewhere in the Southwest.

What’s more, he adds, the trenched courses that seem to lead to and from the pit aren’t canals, but ritual pathways, much like those found faintly radiating from other ancient Puebloan sites, including Chaco Canyon.

“What we found out was, those canals weren’t canals — they were Chacoan roads,” Benson said.

“In fact, if you dumped out all of the water you could hold in Mummy Lake in one of those canals, it wouldn’t even be a trickle.”

He and his colleagues report their findings in the Journal of Archaeological Science.

A stone-lined channel has long been taken for a water-intake ditch at the feature known as Mummy Lake (at right). But new research suggests that Mummy Lake was a ceremonial structure, and the ramp was an entryway. (Courtesy Benson et al.)

Benson is a retired USGS hydrologist and adjunct curator of anthropology at the University of Colorado Museum of Natural History, whose recent studies in Nevada helped identify North America’s oldest known petroglyphs.

While that work was ongoing, he turned to Colorado’s Mesa Verde with a group of colleagues to test the theories surrounding Mummy Lake.

The team first surveyed the lay of the land surrounding Far View Village, the settlement that includes Mummy Lake, built on a ridge some 200 years before Mesa Verde’s inhabitants began constructing its signature cliff dwellings.

They concluded that not only could rainwater not have flowed easily into Mummy Lake’s pit — which is some 27 meters across and 6.5 meters deep — there was hardly enough water to capture to begin with. 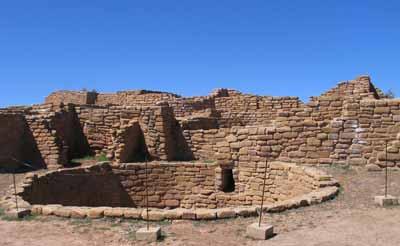 Mummy Lake is part of a complex of buildings, including this housing block and kiva, known as Far View Sites. In 2006, Mummy Lake was officially renamed Far View Reservoir. (NPS)

“What we found out was that the area that could drain into Mummy Lake wasn’t any larger than the area of the Mummy Lake feature,” Benson said.

“Therefore there was not much water that could be provided to Mummy Lake during a normal water year.

“If you look at how much water you could ever put into the depression, it gets no more than several inches in the wettest year in history,” he added, “and that would’ve been evaporated out by July or so. During an average year, the water doesn’t even stay there as late as June.

In addition to this mapping, an analysis of sediment flow by team member Dr. Eleanor Griffin found that the canal-like pathway that seemed to lead downslope into Mummy Lake would quickly choke with mud in a typical summer storm, casting further doubt on the pit’s usefulness as a cistern.

“So, having sort of dispensed with the idea that it was a water-control feature, we also looked at so-called canals that ran from Mummy Lake downridge,” Benson said. 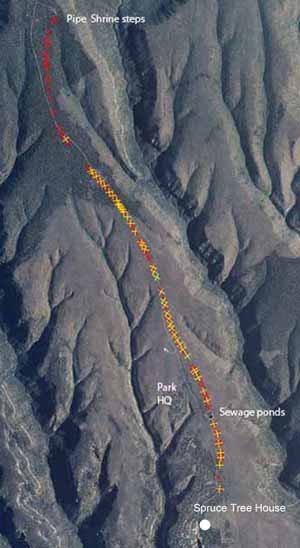 A map shows the course a ridgetop trail, previously thought to be a canal, running from Pipe Shrine House near Mummy Lake to the cliff dwellings at Spruce Tree House.Benson’s team argues that the ridgetop location of the course would make it poorly situated for catching water and suggest instead that it was a ceremonial pathway. (Courtesy Benson et al.)

Drs. John Stein and Richard Friedman, both New Mexico archaeologists, found parallels between these canals and paths found around Chaco Canyon and at a similar Puebloan development in New Mexico’s Manuelito Canyon.

There, Benson explained, such paths are thought by some experts to have been built not as travel corridors but as symbolic ties, linking older, abandoned sites to newer ones still in use.

In the case of Mummy Lake, Benson said, the paths linked the settlement at Mummy Lake, which was built as early as 900 CE, to the more recent and recognizable dwellings of Cliff Palace and Spruce Tree House, which date to the early 1200s.

In this way, Mummy Lake may have been an important early component of the Mesa Verde complex that Puebloans wanted to stay connected to, literally and figuratively, even after they abandoned it and moved to the cliffs.

“So we suggest that this was the model for that part of Mesa Verde: people looking back at their previous history,” Benson said.

As for the structure of Mummy Lake itself, it’s never been completely excavated, Benson pointed out, so the details of its architectural features remain somewhat mysterious.

But ceramic fragments used as fill in the site’s construction suggest that it was built in two phases — the first between about 920 and 1150, and the second between 1150 and 1300.

During this second phase, Benson said, “and a bit later, there are a lot of unroofed kivas, very large ones, in the southwestern U.S., and we think [Mummy Lake] is an example of one of those, although it starts earlier than most of these structures.”

Mesa Verde National Park’s staff archaeologist was not available to comment on the team’s findings. But if they turn out to be right, Benson said, it wouldn’t be the first time that an ancient Southwestern ceremonial site was mistaken for a water tank.

Jesse Walker Fewkes, who anointed Mummy Lake as a reservoir nearly a century ago, had arrived at the same conclusion about a similar feature at the Puebloan village of Wupatki in Arizona.

Today, Wupatki’s “reservoir” is recognized as a ceremonial ballcourt, likely an example of cultural influence from the Hohokam who lived to the south.

“It seemed like wherever Fewkes went, he saw reservoirs,” Benson said.