In 2010, Tycho Brahe was exhumed from his grave in Prague, an event which received extensive international media coverage. Since then, a Danish-Czech team of researchers has been working to elucidate the cause of Tycho Brahe's death. The results of this intensive work now make it possible to rule out mercury poisoning as a cause of death.

For over four hundred years, Tycho Brahe's untimely death has been a mystery. He died on 24 October 1601 only eleven days after the onset of a sudden illness. Over the centuries, a variety of myths and theories about his death have arisen.

One of the most persistent theories has been that he died of mercury poisoning, either because he voluntarily ingested large quantities of mercury for medicinal purposes, or because mercury was used to poison him.

Rumours of death by poisoning arose shortly after Tycho Brahe's death. Brahe's famous assistant Johannes Kepler has been identified as a possible murder suspect, and other candidates have been singled out for suspicion throughout the years, according to Dr Jens Vellev, an archaeologist at Aarhus University in Denmark who is heading the research project.

The mercury poisoning theory has received apparent corroboration from repeated tests of the well-preserved remains of Tycho Brahe's beard which were removed from the grave when his body was exhumed for the first time in 1901.

'To definitively prove or disprove these much debated theories, we took samples from Tycho Brahe's beard, bones and teeth when we exhumed his remains in 2010. While our analyses of his teeth are not yet complete, the scientific analyses of Tycho Brahe's bones and beard are,' explains Dr Vellev. 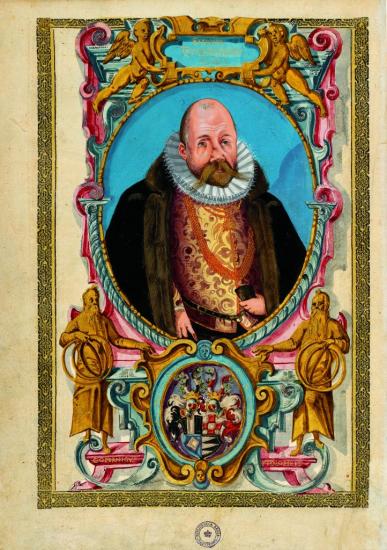 This is a watercolour of Tycho Brahe from around 1600 as he looked shortly before his death. His bushy mustache and slightly deformed nose with its prosthesis are visible. Both have been analyzed by the research team. The image is of a watercolor which was pasted into Tycho Brahe's famous work Mechanica (1597).

'We measured the concentration of mercury using three different quantitative chemical methods in our labs in Odense and Řež, and all tests revealed the same result: that mercury concentrations were not sufficiently high to have caused his death,' says Dr Rasmussen.

'In fact, chemical analyses of the bones indicate that Tycho Brahe was not exposed to an abnormally high mercury load in the last five to ten years of his life,' continues Dr Rasmussen, who analysed the bone samples using cold vapour atomic absorption spectroscopy at the University of Southern Denmark.

'Analyses of hairs from the beard were performed using radiochemical neutron activation analysis and proton microprobe scanning in Řež. They reflect the mercury load in the last approximately eight weeks of Tycho Brahe's life, and these analyses show that mercury concentrations fell from the high end of the normal level eight weeks before death to the low end of the normal level in the last two weeks before death,' explains Dr Kučera.

The "silver nose" that wasn't

In addition to his beard, another central element of the Tycho Brahe myth has been subjected to quantitative analysis: his famous artificial nose. Tycho Brahe lost part of his nose in a duel in 1566. According to tradition, the prosthetic nose he wore for the rest of his life was made of silver and gold.

When Tycho Brahe's grave was opened for the first time in 1901, his nose prosthesis was not found, but there were greenish stains around the nasal region - traces left by the prosthesis.

'When we exhumed the body in 2010, we took a small bone sample from the nose so that we could examine its chemical composition. Surprisingly, our analyses revealed that the prosthesis was not made of precious metals, as was previously supposed. The green colouration turned out to contain traces of equal parts copper and zinc, which indicates that the prosthesis was made of brass. So Tycho Brahe's famous "silver nose" wasn't made of silver after all,' explains Dr Vellev.

The reconstruction of Tycho Brahe's face

Researchers also took advantage of the opportunity to perform a CT- scanning Tycho Brahe's skeleton while they had access to his remains in 2010. The researcher team hopes to be able to reconstruct Tycho Brahe's face on the basis of the scanning and their analyses.