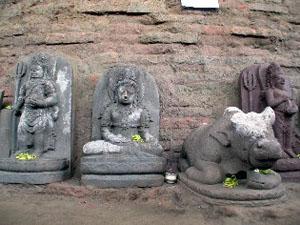 Archeologists on Monday announced they had found remnants of an ancient village and a burial complex in the Merangin Geopark in Jambi.

“In the framework of our research, we found ruins of an ancient village and a burial complex,” said Yusuf Martun, the coordinator for the archeology division of the Merangin Geopark research team. “Their conditions are precarious because they were located somewhere in the middle of the jungle.”

Yusuf was unable say how old the central Sumatra settlement or burial site were but estimated them to be at least hundreds of years old. He cited details of the burial practice for his estimate.

“The graves were not in a row laying on the north-south axis like in present day Muslim cemeteries,” Yusuf explained.

The graves are following an east-west or a southeast-northwest axis.

He said that some of the graves were terraced mounds that used stone walls.

“We cannot yet guess the age of this ancient grave complex but from what residents of Air Batu village have said, the ruins are located in the original location of their ancestors’ initial settlement when they came to the region hundreds of years ago,” he said.

Villagers said that according to stories handed down from generations, the ancestors had moved the location of the village twice, before settling in the current Air Batu village location, two kilometers from the boundary of the Merangin Geopark.

He estimated the ruins to date from the end of prehistory.

Village elders, he said, also said the oral traditions spoke of another mass grave complex where victims of a natural disaster in the area were buried.

“They call this mass grave of natural disaster victims ‘Tebat’ but the elders could not say what the natural disaster was, if it was an earthquake or flood,” Yusuf said. “We need to study this.”