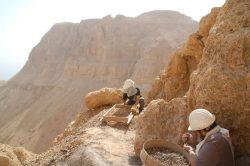 Tucked almost secretively away within a cliff high above the Dead Sea, archaeologists have recently uncovered more artifacts that may hold clues to the history of a cave that has yielded contents dated to the turbulent times of Jesus, the First Century Jewish Revolt and the Dead Sea Scrolls.

Led by Dr. Haim Cohen of Israel's Haifa University, a small team ascended a steep escarpment of rocky terrain to the cave each morning at 5.45 a.m. beginning on November 28 for several weeks of painstaking excavation. The routine climb took 2 hours to reach the excavation site, a cave where Cohen had previously conducted excavations in 2003 and 2006. Cave 27, also called the "Mikveh Cave" or Cave of the Pool at Nahal David, is best known for the Second Temple period (530 BCE to 70 CE) mikveh, or ritual cleansing pool, dated to the time of the first centuries B.C. and A.D. It was discovered and excavated just outside the cave entrance. The cave is located in a cliff approximately 400 meters above the Dead Sea and is accessible from a plateau above the cave. Among the many other finds excavated in past seasons were Early Roman period potsherds, flint tools, remains of straw matting, textiles, date pits, ropes, olive pits, animal bones, two coins of Agrippa I, a glass bottle, an iron trilobate arrowhead from the Early Roman period, a pottery seal with a geometric decoration considered to be from the Chalcolithic period, and an ashen hearth. The most intriguing questions, however, have surrounded the presence of the mikveh at the entrance to the cave, a relatively unusual location for such a feature.

Now, Cohen and his team have uncovered new artifacts and items that will add to their database of finds, a body of information or evidence that will help them answer some important questions about what the cave was used for, who may have inhabited or used the cave, and what significance the cave holds. Their most recent efforts have uncovered a large amount of pottery dated to the Second Temple period, and some dated to the Chalcolithic and Iron Age. Other finds included a few fragments of Roman period blown glass, identified as the base and rim pieces of perfume bottles; and an abundance of organic material such as twigs, branches of palm trees, animal bones, fragments of reed and straw, dates (one remarkably well preserved), rope, (including one knotted around a ceramic handle), fabric and leather, including a remarkably well preserved part of a sandal. 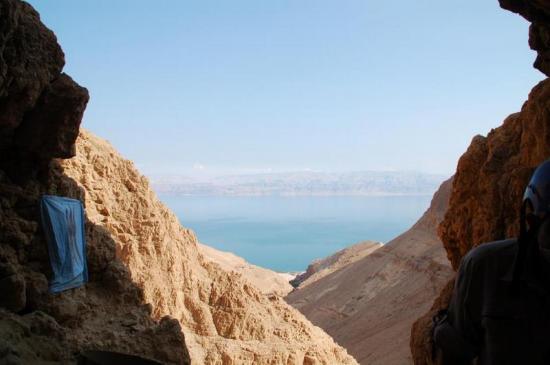 View of the Dead Sea as seen from the cave. Photo courtesy Origins Discovery Project

Cohen suggests that the cave may possibly have been, like the caves that harbored the Dead Sea Scrolls, a repository for sacred documents or artifacts, such as the lost archives of the Jewish Second Temple, possibly hidden away for protection and safekeeping from the Roman forces during the unrest of the 1st century A.D. Revolt. Along with the mikveh, among past finds at the site has been additional evidence of possible priestly activity, such as a leather scroll cover.

Cohen will be returning with a team in 2013. "The shortage of time prevented us from achieving all the objectives we had set, although we did succeed in clearing up the complicated stratigraphy of the cave and the history of the usage", says Cohen. "We intend to come back to the cave to finish our work in a short time."

Much more work is left to be done. He and his colleagues are calling for volunteers and students who may be interested in participating in the effort. More information can be obtained at the Origins Discovery Project website.