Between October 2010 and May 2011, Shaanxi provincial Institute of Archaeology, Institute of Vertebrate Paleontology and Paleoanthropology, the Chinese Academy of Sciences and Luonan County Museum formed a joint archaeological team to conduct a rescue excavation at Mengwa, Luonan Basin. 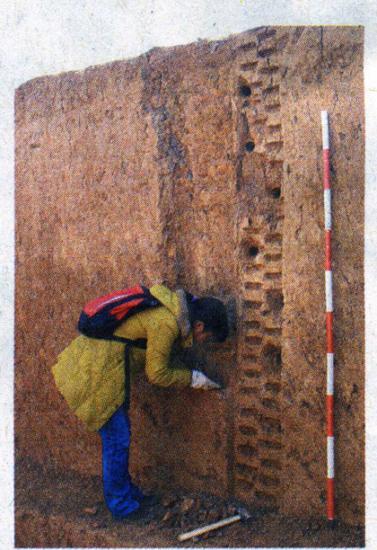 The Palaeolithic site Mengwa is located in the western Luonan Basin, and is 6 km away from the Luonan County. On 28 August 2010, a re-survey to an exposed loess deposit during an infrastructural works collected 13 pieces of Palaeolithic stone implements, including stone cores, flakes, scrapers and thin-blade axes etc. Among these, the thin-blade axes has been the first stratigraphically confirmed record since Palaeolithic implements was discovered in 1995. As there are great importance of this discovery, Shaanxi provincial Institute of Archaeology has initiated the application to the state administration of Cultural heritage to conduct a rescue excavation at Mengwa and was joined by Institute of Vertebrate Paleontology and Paleoanthropology and Museum of Luonan County.

The superficial deposit at Mengwa is located on second terrace with loess deposits, and this excavation has exposed 800 square meters. About 1,700 pieces of stone artifacts have been unearthed.  Moreover, about 300 pieces of stone artifacts with no context was collected from loess deposits and around the site. Stone artifacts unearthed from the stratigraphy include stone cores, stone flakes, retouched tools and debris etc. Among the retouched implements, there are heavy tools such as choppers, hand picks, thin-blade axes and stone balls etc., as well as light tools such as scrapers and points etc. In particular, part of the implements unearthed could be refit on the locality. On the other hand, during the clearance of Layer 2 in T10 (within a scope of 5m × 3.5m, N-S to E-W), a working platform of prehistoric stone tools manufacturing has been identified, where about 120 pieces of reassembled quartz implements were discovered. This suggested that many of the reassembled produced on locality was quickly buried by loess deposits after discarded.

Luonan Basin has copious Palaeolithic localities of wilderness type. After some 10 years of continuous field survey, we have discovered abundant types of stone tools that were popular in the African and Eurasian Continent, such as hand axes, thin-blade axes, tri-ridge hand pick and large stone knife etc. This excavation is the first such excavation that aims to systematically collect wilderness Palaeolithic localities in the Luonan Basin, and proved that Acheulian industry appeared in the Luonan Basin no later than 150,000 years ago. The excavation of Mengwa site would produce important influences on the research of paleoanthropology environment and the character of Palaeolithic industry.      (Translator: Li Langlin)