Mel Gibson, the Oscar winner who has defended himself against accusations of anti-Semitism, is developing a film for Warner Bros. about the life of Judah Maccabee, the warrior whose ancient victory is celebrated by Hanukkah.

Gibson's Icon Productions has closed the producing deal with Warner Bros., and Joe Eszterhas will write the screenplay. Gibson's camp said the filmmaker will decide if he's directing after the script is done and that he has not ruled out the possibility that he could act in the film.

Maccabee, his four brothers and his father led the Jewish revolt against the Greek-Syrian armies. The role of his father, the priest Mattathias, might be a logical one for the 55-year-old Gibson if he does opt to appear in the film.

Maccabee is a figure who has fascinated Gibson for years, and at one point he considered this as a follow-up project to "The Passion of the Christ" in 2004. Gibson's camp describes the film in terms that resonate with past Gibson projects, such as "Braveheart" or Roland Emmerich's "The Patriot."

History and religion are career cornerstones for Gibson the filmmaker. He wrote, produced and directed "The Passion of the Christ," which became a global sensation and, with $612 million in worldwide box office, stands as the highest -grossing R-rated film of all time. The movie also set off an intense international debate as viewers walked away from the movie with very different messages.

Gibson's views on religion and politics made him a firebrand figure, but his standing in Hollywood was shaken by more personal controversy. A DUI arrest in the summer of 2006 became a life-changing calamity after anti-Semitic remarks he made while in custody were reported across the planet. Gibson apologized and called it "a moment of insanity" and a "public humiliation on a global scale."

Last summer, tapes of an enraged Gibson berating his girlfriend were made public, and the star's racist, violent and misogynistic comments made many observers predict his career as a bankable Hollywood player was over. Gibson later said it was "one terribly awful moment in time, said to one person, in the span of one day," and something that "doesn't represent what I truly believe or how I've treated people my entire life."

Eszterhas, best known for fare such as "Basic Instinct" and "Showgirls," is an intriguing collaborator for Gibson. The screenwriter was awarded the Emanuel Foundation's Lifetime Achievement Award in 1995 for his writings about the Holocaust in Hungary and two of his projects, "Betrayed" and "Music Box," speak to Jewish themes. 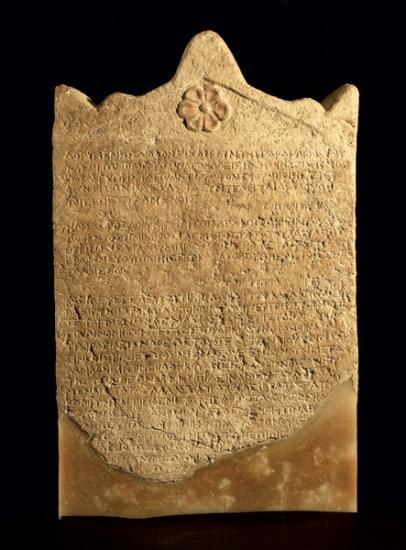 A major new inscription that recently surfaced on the antiquities market and has been acquired by the Israel Museum in Jerusalem sheds dramatic new light on the run-up to the Maccabean revolt in the second century B.C.E.1

Until now, almost everything we know about the Maccabean revolt, which freed the Temple from the desecration of Antiochus IV Epiphanes (the successful campaign to cleanse the Temple is still celebrated by Jews in the festival of Hanukkah), comes from the writings of Josephus and the books of 1 and 2 Maccabees (apocryphal in Protestant and Jewish tradition and deutero-canonical in Roman Catholic tradition). The new inscription, however, provides a more realistic context to some important history of that period.