MEGIDDO, Israel -- The Book of Revelation says the biblical fortress of Armageddon will be the site of an apocalyptic battle between good and evil at the end of time. Scientists believe it could also be the place where time begins -- at least for archaeology.

In a groundbreaking new project, scholars are using the rich archaeological remains that soar more than 50 feet above the Jezreel Valley in northern Israel to synchronize the clocks of the ancient world and create the first definitive calendar of human history. 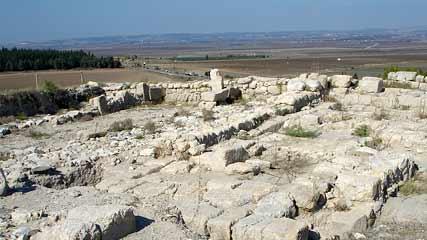 The ruins atop Megiddo in Israel may look like just another hill, but the mound is man-made, containing the remains of 29 cities built one on top of the other from 3,000 to 300 B.C.

The word "Armageddon" comes from the Hebrew Har Megiddo, which means mountain of Megiddo, where Revelation says the final battle will take place. To the untrained observer, the modern-day site of Megiddo looks like one more hill in the Carmel mountain range near Haifa. But the vast mound is entirely man-made, containing the remains of 29 separate cities built one on top of the other by a succession of civilizations from 3,000 to 300 B.C.

More than a century of excavations has revealed a complex network of houses, stables, temples and palaces protected by massive fortifications and watered by two natural springs.

The treasures discovered at the site have posed as many questions as they have answered about the history of the ancient world. A vast, centuries-old temple deep within the mound is the largest yet discovered from that period in the Levant but its purpose and rituals -- including several large, perfectly round black stone altars just a few inches high -- are unknown.

It was around this time that stone inscriptions and records on clay tablets and papyrus began to record human history in the area. The Bible, the most monumental work of all, emerged during this period. Early archaeologists used the Bible as a guide, relating their finds to events described there and allocating them to biblical figures. 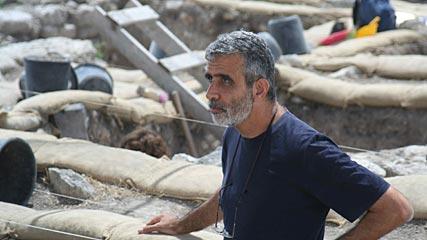 Israel Finkelstein of Tel Aviv University looks over the archaeological dig which is located in the Jezreel Valley in northern Israel. Finkelstein the current director of the excavation.

The legendary Israeli archaeologist Yigael Yadin identified one impressive Iron Age gateway as the remains of a city built by Solomon in the 10th century B.C., but the current director of the excavation, Israel Finkelstein of Tel Aviv University, rocked the scholarly world when he declared the remains to be at least 100 years later. Finkelstein's theory threw the traditional view of the Davidic and Solomonic kingdoms into disarray and cast doubt on whether the biblical giants had ever truly been "kings" at all.

Now Finkelstein, together with Tel Aviv University physicist Eli Piazetsky, is spearheading an international effort to settle the chronology once and for all. A scientific conference at Megiddo, "Synchronizing Clocks at Armageddon," launched a project to analyze 10 separate Iron Age destruction layers using four state-of-the-art scientific techniques: radiocarbon dating, optical luminescence, archaeo-magnetism and rehydroxilation -- a new method pioneered in Britain within the last two years.

Megiddo is the only place in the world with so many destruction layers -- archaeological strata resulting from a calamity such as a fire, earthquake or conquest -- that resulted from a specific event in history.

Finkelstein told AOL News that the site provides "a very dense, accurate and reliable ladder for the dating of the different monuments and the layers."

"These destruction layers can serve as anchors for the entire system of dating," Finkelstein said. "Megiddo is the only site which has 10 layers with radiocarbon results for the period 1300 to 800 B.C.E."

Scientists hope that by analyzing the archaeological strata they can nail each layer to a specific year or decade, using the physical data from Megiddo to set the clocks of history and create a definitive timeline that can be used as a basis for accurately dating all archaeological sites. 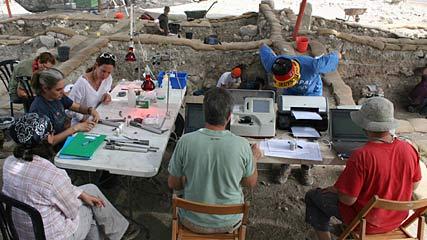 Part of the Tel Aviv University team work on some of their discoveries at the archaeological dig which is located in the Jezreel Valley in northern Israel.

It's an ambitious undertaking and one with profound implications for historical scholarship. A definitive timeline for the Levant could also unlock the secrets of ancient Greece, where specific historical dates before about 600 B.C. are basically guesswork. One conundrum that has perplexed scholars for years is a major discrepancy between the dating of sites in the Levant and those with similar pottery and other artifacts in the Aegean Basin.

"For many years the traditional dating of strata in the Levant were about 100 years earlier than that of the Aegean. There was similar pottery that we date to the 10th century and they date to the ninth. The question was, who's right?" said Aren Maeir of Bar-Ilan University, director of the excavation at Tell es-Safi, believed to be the ancient city of Gath, home of Goliath.

"The problem is that the Aegean does not have an independent chronology for the Iron Age," Finkelstein said. In the absence of a historical record, dating of pottery from ancient Greece has relied on Greek pottery found in Middle East excavations. New doubts cast by Finkelstein about the dating of sites in Israel have thrown the ancient Greece timeline into further disarray.

The new project will take samples from Megiddo and other sites where dates are fairly certain and subject them to a battery of four different scientific tests:

Radiocarbon, or carbon-14 dating, measures the decline of a naturally occurring radioisotope to fix the date it was deposited at the site. It can be used for animal remains, plants and even olive pits. But it cannot determine the age of inorganic material like pottery; some materials, including wood, can give false results; and it requires a complex statistical calibration that on 3,000-year-old items produces inaccuracies of up to 300 years.

Archaeo-magnetism measures changes in the Earth's magnetic intensity and magnetic north over centuries to date pottery and cooking ovens. Optical luminescence is in its infancy. It measures the effect of the sun's rays on quartz particles to determine when certain minerals were last exposed to sunlight.

Rehydroxilation is a method recently developed in Britain that measures the amount of moisture absorbed from the atmosphere by oven-fired clay. Experiments suggest that it can accurately date bricks and pottery from 50 to 2,000 years old. The team has taken some 5,000-year-old pottery samples back to the lab at Manchester University to see if they get similar results.

They believe the method has the potential to become as important for ceramics as radiocarbon dating is for organic materials.

"Making the various tools for dating archaeological finds more accurate is very important," said Maeir, whose own excavation is part of the project. But he warned that rehydroxilation may not provide magic answers. Like carbon-14 dating, it involves a statistical manipulation that is likely to result in similar disputes between scholars.

"If they did reach a clear-cut model which would be agreed upon by the overall majority, it could have a whole slew of historical implications," he said. "It changes your understanding of what was going on from a political, from an economic point of view at these various sites. This could in theory have very broad implications for our ability to interpret the historical scenarios."