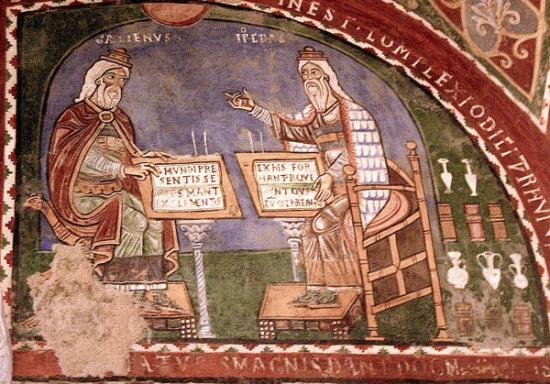 Ancient Greek doctors were the ones who invented the infamous Mediterranean diet, as hippocratic physicians used rich flavors in food in order to treat their patients, a new study from the British University of Exeter revealed, according to the Daily Mail.

The experts at the University of Exeter studied texts of ancient Greek doctors and found that they believed rich flavors could improve the food’s nutritional potency, while one of them, Galen of Pergamon, prescribed food recipes containing garlic and onions to patients. According to the same study, their work laid the principals of modern Mediterranean cooking, considered among the world’s healthiest. At the same time, ancient Greek philosopher Plato wrote about the importance of food in health, while Hippocrates said: “Let food be thy medicine and medicine be thy food.”

As Professor John Wilkins, an expert on Greek Culture at the University of Exeter, explained to Daily Mail, ancient Greek physicians “take flavor as a measure of nutritional potency because that property of astringency in unripe apples or pungency in onions reflects the effect that the food will have on the digested material and ultimately the impact on body humors. Galen sees nutrition as a third of the medical art, along with pharmacology and surgery. If people had too much thick humor, phlegm in particular, then they needed onions and garlic to thin it. That is a sort of early idea of dealing with too much cholesterol.”

Furthermore, Wilkins described that Galen’s writings included recipes for pancakes and put under discussion the types of bread and cakes that should be eaten, while at the same time tackling the dangers of milk, which, according to him, contains whey and solids that may block the narrow channels in the liver in susceptible individuals. His recipes included simple cooking techniques, designed to bring out the flavor of basic ingredients and he even wrote about how snails – a dish associated with French cuisine – should be boiled twice to reduce their laxative properties. Galen even recommended – then considered – tropical spices, such as pepper, ginger and cinnamon, while other doctors recommended fruits and vegetables. In other cases, ingredients that are no longer used, like silphium, asphodel and muscari were also used in cooking.

“The ancient diet resembled the modern Mediterranean diet but without oranges and lemons from China and tomatoes from South America of course. The diet is largely based on regional plants, which the doctors generally preferred over imported luxuries. Also, the ancient Mediterranean did not sustain a huge number of animals, so meat was limited, as it is in the modern Mediterranean. The soil produced flavor-rich food, making cereal palatable,” concluded Professor Wilkins, whose study is published in the Journal of Ethnopharmacology.