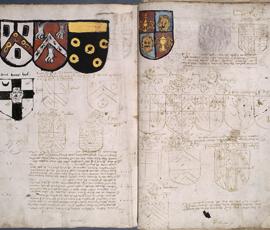 A rare accounting document, half-concealed beneath a coat of arms design, has revealed the activities of Italian bankers working in early 15th century London, decades before the capital became a financial powerhouse. The discovery was made by economic historians at Queen Mary, University of London.

Among the pages of a bound collection of traditional English crests held at the London College of Arms - the headquarters of British heraldry - are several papers belonging to a book of debtors and creditors for Florentine merchant-banking company, Domenicio Villani & Partners.

The coats of arms are estimated to have been painted in 1480, during a time when good quality paper was scarce and anything that was available was re-used.

The banking records, only half-covered by the design, date from 1422-24 and hint at the extensive trade in wool and other commodities produced in Britain during the era.

Dr. Francesco Guidi-Bruscoli, who is based at the University of Florence and also a Research Fellow at Queen Mary, and Professor Jim Bolton of Queen Mary’s School of History have spent more than a decade working on the Borromei Bank Research Project, documenting the activity of Italian merchant bankers operating from London in the late medieval period.

Dr. Guidi, who was alerted to the Villani ledger’s location by QM historian, Professor Kate Lowe, comments: “What makes the discovery of these pages so surprising is that, usually, the foreign offices of the Florentine companies periodically sent the books back home so they could be checked.

“In this case, the books remained in London, where they gradually lost their documentary value and some 55 years later were considered scraps of good quality paper to be re-used for the drawing of coats of arms.

” Cross-checks with documents held in the Florentine States Archives allowed Dr. Guidi to identify the otherwise anonymous ledger. He has translated the documents from their original Italian, with the results of the find published earlier this year (but bearing the date of 2010) in the Italian journal Storia economica.

“It is not possible to reconstruct, from such a limited number of transactions, the full activities of the company to which the ledger belongs, but we can get an idea of the goods being traded in the London marketplace,” Dr. Guidi says. “Raw wool, woollen cloth and tin were popular exports, while we imported spices, dyes and other luxury goods.”

By the late Middle Ages, Italian merchants had created far-reaching pan-European networks. Their business involved international trade, exchange by means of written instruments and loans to sovereigns and popes. England’s trade in commodities, such as wool and woollen cloth, eventually led to the nation becoming the financial hub of the West, overtaking Italy in status.

Another research project on Italian bankers by Dr. Guidi and colleagues at Bristol was recently published as ‘EarlyView’ in the academic journal Historical Research and attracted international attention after they discovered financial records demonstrating that the voyage made by the Venetian John Cabot under the patent of Henry VII of England was financed by Italian bankers (the London-based Florentine company of the Bardi). The same records refer to a journey towards “the new land”, thus implying that the money was given to Cabot so that he could find previously discovered (or at least heard of) land.