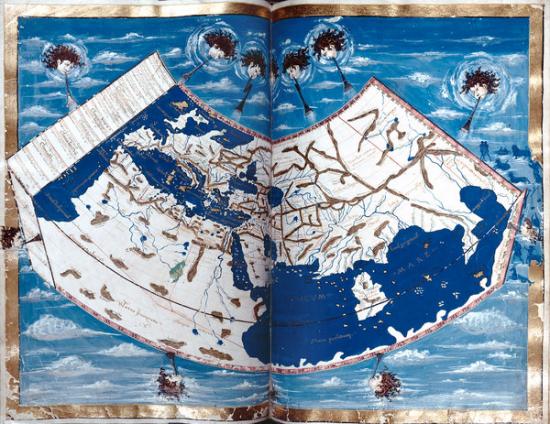 The World as They Knew It : The Legacy of Greco-Roman Mapmaking

Long before people could look upon Earth from afar, completing a full orbit every 90 minutes, the Greeks and the Romans of antiquity had to struggle to understand their world’s size and shape. Their approaches differed: the philosophical Greeks, it has been said, measured the world by the stars; the practical, road-building Romans by milestones.

As the Greek geographer Strabo wrote at the time: “We may learn from both the evidence of our senses and from experiences, that the inhabited world is an island, for wherever it has been possible for men to reach the limits of the earth, sea has been found, and this sea we call ‘Oceanus.’ And whenever we have not been able to learn by the evidence of sense, there reason points the way.” Strabo’s words will greet visitors to a new exhibition, “Measuring and Mapping Space: Geographic Knowledge in Greco-Roman Antiquity,” which opens Friday at the Institute for the Study of the Ancient World, at 15 East 84th Street in Manhattan. The show runs through Jan. 5.

Roger S. Bagnall, director of the institute, an affiliate of New York University, said the exhibition would not only cross ancient borders and cultures but also modern disciplines. “Our exhibitions and digital teams,” he said, “present a 21st-century approach to the ancient mentality concerning geographic space and how it is represented.” The show brings together more than 40 objects that provide an overview of Greco-Roman geographical thinking — art and pottery, as well as maps based on classical texts. (Hardly any original maps survive; the ones in the exhibition were created in the Middle Ages and the Renaissance from Greek and Roman descriptions.) 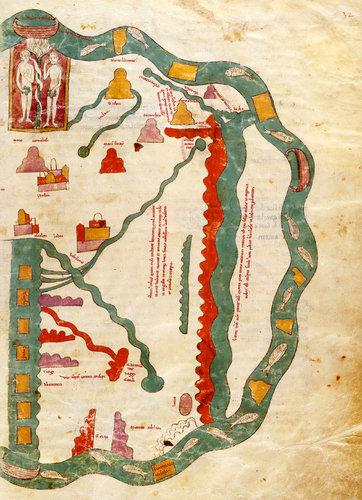 An illumination from a 13th-century copy of the "Commentary on the Apocalypse and the Book of Daniel," originally by the eighth-century Spanish monk and geographer Beatus of Liebana. The Morgan Library and Museum

“Geography is not just maps,” said the guest curator, Roberta Casagrande-Kim, a scholar of classical concepts of the underworld that go back well before Dante took his journey through the nine circles of hell. “There is also the cognitive side underlying mapping,” she said. Making sense of the world’s dimensions must have seemed daunting at first. Plato wrote of Socrates saying the world is very large and those who dwell between Gibraltar and the Caucasus — in his memorable imagery — live “in a small part of it about the sea, like ants or frogs about a pond, and that many other people live in many other such regions.” An early advance in Greek thinking was Aristotle’s discovery, in the latter half of the fourth century B.C., that the world must be spherical. He based this on observations of lunar eclipses, ships disappearing hull first on the horizon, and the changing field of stars observed as one travels north and south. Then Eratosthenes, a librarian at Alexandria in the third century B.C., employed the new geometry to measure the world’s size with simultaneous angles of the sun’s shadow taken at widely distant sites in Egypt. That yielded a remarkably accurate measure of Earth’s circumference: it was clear that the world they knew — the three connected continents of Asia, Europe and Africa — was only a part of lands unknown, out of sight but not out of mind.

Other artifacts on view illustrate ancient methods of surveying and measuring lands, and some of the earliest efforts to measure longitude and latitude and to divide the world into climate zones. From north to south, both the Greeks and the Romans identified the frigid Arctic Circle, the northern temperate hemisphere, the torrid Tropic of Cancer, the southern temperate zone and the South Pole. The two temperate zones were believed to be the only habitable regions, but contact between the two was thought unlikely. Across the wall of the first gallery is projected a digital replica of the Peutinger Map, more than 22 feet long and 2 feet high, illustrating how Roman mapping was at once practical and magnificent. It charts the empire’s roads, cities, ports and forts from Britain to India. Sketches of trees mark forests in Germany. Topography is minimal, roads are off-scale wide, towns are indicated by symbolic walls or towers — more of a traveler’s guide but much too large to serve as a handy road map. In a study of the map, Richard J. A. Talbert, a historian at the University of North Carolina who specializes in cartography of the Greeks and the Romans, noted that in one sense it was an example of common Roman “journey” charts, much like the Greek “periploi” — mostly written descriptions of landmarks and ports mariners were likely to encounter. Geographers then were less committed to drawing maps than to narrative wayfinding. Distances had priority over orientations; getting from here to there was more important than the lay of the land. 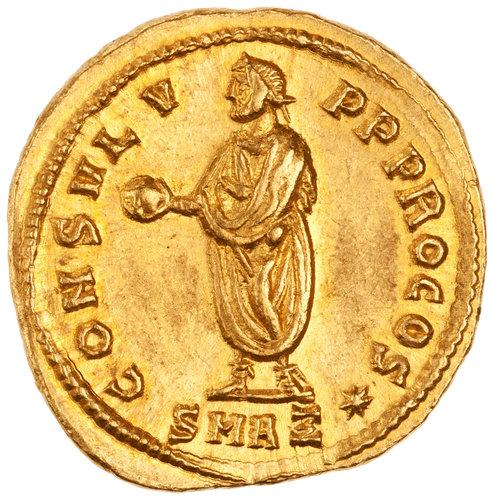 An early copy of the map came to light in the 17th century and was owned for years by Konrad Peutinger, a Hapsburg diplomat and map collector. It is now is in the Austrian National Library in Vienna. The map, probably created in the early fourth century A.D., may have been intended to impress the emperor’s subjects and notable guests, Dr. Talbert has concluded. It was oriented with the capital at its center, showing that all roads indeed led to Rome. Mapping was a tool of propaganda, just as many Roman coins showed the emperor Augustus, or Octavian or Diocletian, holding a globe, a symbol of the whole world in his power. Jennifer Y. Chi, the institute’s exhibitions director and a specialist in Roman sculpture, said that Augustus, in particular, “promoted his power systematically through many different media, and even the illiterate understood the globe’s symbolism.” The rarely exhibited material is on loan from several American institutions, including the Morgan Library and Museum, the Metropolitan Museum of Art, the New York Public Library, the American Numismatic Society and the libraries at Columbia and Harvard. The show is supported by the Leon Levy Foundation. 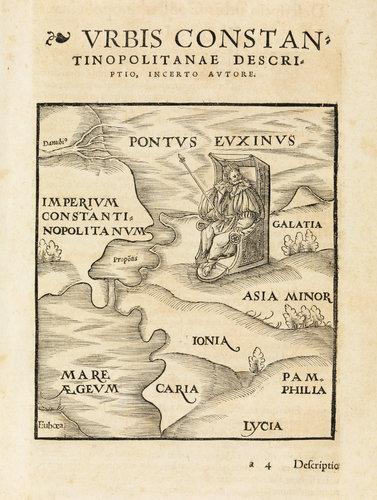 A 15th-century copy of an ancient manuscript from Constantinople. Columbia University

All in all, whether guided by the stars or by imperial roads, the Greeks and the Romans did well in preparing the way to geographic knowledge of worlds known and unknown, real and imaginary. They anticipated modern concepts of mapmaking: anything that can be spatially conceived can be mapped. The most influential of the ancient Greeks was Claudium Ptolemy, the foremost scholar at the Alexandria library in the second century A.D. Two of his books, one on astronomy, and another on geography, were finally translated into Latin in the Middle Ages. Notes accompanying the exhibition point out that Ptolemy’s “Geographia” provided ample information on locations of ancient lands and cities, enabling Renaissance cartographers to prepare the first fairly modern world maps, the “Mappa mundi” style that was followed for the next couple of centuries. The maps were decorated with the eight classical headwinds; symbols taken from Aristotle’s conception of the primary elements of fire, earth, water and air; and a scattering of zodiac signs around the edges. Even Ptolemy’s errors were influential. Instead of sticking to Eratosthenes’ more accurate estimate of Earth’s size, Ptolemy handed down a serious underestimate that later apparently emboldened Columbus to think he could sail west to reach China or Japan. Instead, he reached landfall in what became known as the West Indies — about the distance from Europe that Ptolemy had led him to expect, but with no “Grand Khan” in sight. So it was perhaps no coincidence that the rediscovery of Greco-Roman geography fostered the age of Western exploration. After 1492, there were new worlds to measure and map. Within two centuries, exhibition notes remind us, “the primacy of ancient geographic knowledge and mapping conventions came to an end.” New discoveries and technologies had made Greco-Roman geography obsolete. But its influence helped shape the way we still look at the world. 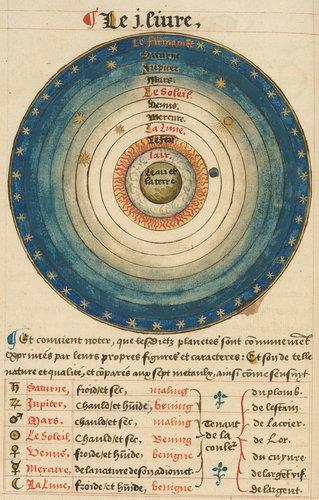 A diagram of the solar system from a popular 16th-century astronomy textbook by the French cartographer Oronce Fine. Houghton Library, Harvard University