A controversial new archaeological theory says the continent’s earliest humans may have come from Europe, not Asia 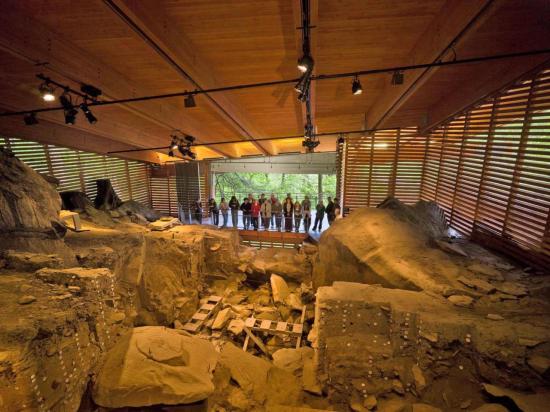 Stone tools were found at the Meadowcroft Rockshelter in Pennsylvania that could be 15,000 to 17,000 years old. -  Ed Massery -

Science agrees on this much: For most of their history, the Americas were a vast land with no people. Our ancestors left Africa and populated the rest of the world — Europe, Asia, even Australia — but never set foot here.

The story of how humans eventually arrived has become a familiar one. During the last ice age, the planet’s sea level dropped, uncovering a vast land bridge between Asia and America and allowing the first bands of people to migrate from the Russian far east into what is now Alaska. Once the glaciers receded, the new arrivals drove south to the Great Plains and went on to people the Americas. Their descendants founded pueblo cities, drove horses across the grasslands, built empires in the Andes. By the time Christopher Columbus made landfall in 1492, he had missed discovering the New World by a span of time so vast it would have escaped his comprehension.

Now a pair of archeologists are upending that widely accepted narrative with a new one. Citing a series of puzzling finds along the East Coast — finely wrought stone tools made thousands of years before the land-bridge migration — they suggest that the New World’s discoverers may have come not from Asia, but from Europe. Some 20,000 years ago, a Stone Age people known as the Solutreans lived in the lands of today’s Spain and France, and their tools bear striking similarities to the ones being found on the East Coast.

In a new book, “Across Atlantic Ice,” archaeologists Dennis Stanford and Bruce Bradley suggest that during the ice age, as the polar ice expanded far to the south, the Solutreans could have put to sea in sealskin boats and hunted along the biologically rich ice edge, eventually following it west to North America.

If their idea, called the Solutrean hypothesis, becomes widely accepted, it would mean dramatic revisions to the story of the ancient world. It would mean that the sea played a central part in the drama of human expansion out of Africa, with oceans serving more as roads than as barriers. And in the matter of “who came first” — a question with heavy moral and political overtones — it would mean that all the Americas would have a new origin story to contend with.

“This may be one of the most important discoveries in the history of North American archeology,” says Boston University’s Curtis Runnels, who is editor-in-chief of the Journal of Field Archaeology and was not involved in the work. “A completely new world is coming into distant view.”

THE CONTROVERSIAL HYPOTHESIS is part of a new intellectual ferment surrounding the question of how and when the Americas were populated. For many decades, the reigning orthodoxy was, in the shorthand of archaeology, “Clovis-first.” The name comes from Clovis, New Mexico, where a distinctive type of stone tools was first identified. These tools have been found at numerous sites, but never dating from earlier than about 13,000 years ago — precisely the moment in prehistory when a corridor in the northern glacier would have opened up, allowing people down from what is now Alaska. Clovis-first is a grand unifying theory of America’s deep history: The land bridge immigrants, the people who made the Clovis tools, the founders — they are all the same people.

This biface lithic blade, under investigation by Dr. Dennis Stanford, was found in 1970 by Thurston Shawn of Hampton, Virginia, when he dredged it and several pieces of mastodon tusk and teeth up while dredging for scallops 40 miles off the coast. – Chip Clark -

In recent years, though, archeologists have come to accept a lengthening list of so-called pre-Clovis sites, places with signs of people that date back too far to be part of that story. Clovis-first now looks untenable. This has brought new theories and also a measure of discord, as the prize of precedence is up for grabs.

“A lot of archeologists would like to be known as the person who discovered the origins of an entire people,” says Metin Eren, an archeologist at the University of Kent.

Stanford didn’t set out to explode the field of archaeology; in fact, he was looking for ways to confirm the Clovis-first theory. Stanford, now director of the Paleo-Indian Program at the Smithsonian’s National Museum of Natural History, spent a substantial part of his early career at inhospitable digs in Alaska, hoping to find stone tools that could fill in a crucial missing piece of the puzzle. Clovis-style tools appear around 13,000 years ago in the heart of North American continent, so one would expect to find clear predecessors along the land bridge route that brought them there. But after more than two decades of work in Alaska, no evidence was forthcoming — in fact, to this day nobody has found any. This left Stanford, and his longtime collaborator, Bradley of the University of Exeter, with doubts about the idea that whoever made the Clovis tools had their roots in the Asian immigration.

The pair was led to another possibility by a trail of stone tools that pointed east, not west. There are two remarkable archeological sites on the East Coast — the Meadowcroft Rockshelter in Pennsylvania and Cactus Hill in Virginia — with evidence of stone tools that predate Clovis. Radiocarbon dating suggests that they are perhaps 15,000 to 17,000 years old. And more recently there have been a series of finds in the mid-Atlantic states that appear to be even more ancient. In the peninsula that holds Delaware, archeologists have been digging up blades and points that appear to be around 21,000 years old, and perhaps even older.

And then there is the story of the Cinmar, a scalloping boat that was working near the mouth of the Chesapeake Bay when its net snagged and had to be brought up. Out spilled the tusk and other bones of a mastodon, as well as a gorgeous knife of volcanic rock more than 7 inches long. The mastodon dated to about 22,000 years ago, hinting that the tool was equally ancient.

This stony evidence forms the core of the Solutrean case. Bradley is a stone tool specialist and a flintknapper: He can fashion the tools himself, giving him an intimate feel for the techniques ancient people would have employed. The book argues, through close analysis, that the finds in the eastern United States — Meadowcroft, Cactus Hill, and more recently in the mid-Atlantic — are the precursors to Clovis, and themselves close to what is found back in Europe. It all forms one line of technology, they argue, too close to have occurred by accident.

“They are not just similar, they are related,” says Bradley. “Independent innovation in stone tools is incredibly rare.”

THE SOLUTREANS TAKE their name from Solutre, a village in eastern France where the sophisticated stone tools — such as spear points, arrowheads, and knives — that typify the culture were first uncovered in the 19th century. Signs of the Solutreans appear roughly 24,000 years ago in France and on the Iberian peninsula, then a cold and forbidding place. Bradley and Stanford argue the Solutreans could have worked the ice edge, much like the Inuit today, eating fish, birds, and seal, and putting ashore as needed. Eventually, this icy path would have deposited them on North America’s eastern shore. It was only later, they argue, that people started to arrive from Asia.

Stanford and Bradley have been developing their hypothesis since the late 1990s, with research, papers, and conference presentations; the new book represents their first attempt to bring all the lines of argument together.

In its emphasis on the sea, it aligns with a line of thinking in archaeology that we have almost certainly underestimated the seafaring abilities of our ancestors. Boston University’s Runnels recently showed that early human ancestors arrived on isolated Mediterranean islands as much as 800,000 years ago. Humans showed up tens of thousands of years ago in Australia, a land they could only have reached by boat. And another theory about the Americas explains pre-Clovis sites by suggesting that ice age peoples came down the Pacific Coast, skirting the glaciers, and then settled inland before working their way back north.

The archeological community has been consistently skeptical of the Solutrean hypothesis. There is dispute about the dating of the tools the team cites. And there is a broader sense that their claim is far more extraordinary then the evidence they have marshaled to support it. Eren, who is himself an expert flintknapper and who has worked closely with Bradley, says that the similarities between the tools found in Europe and North America could easily have been an example of independent invention.

“Stone can only be broken in a limited number of ways,” says Eren. “Just because they look similar does not mean they are historically related.”

Critics also have trouble with the notion that Stone Age people could have made their way across the frigid, storm-churned North Atlantic, even if they were skilled seafarers. There is debate among paleo-oceanographers about the location of the ice front, and how continuous it would have been. There is no direct evidence of Solutrean watercraft, and none is likely to be forthcoming. Time is not kind to timber and sealskin.

A theory about human migration does not have to be certain, however, to engender controversy. Debates about origins are never just about science, and one cannot offer a new picture of settlement from Europe without also raising intimate questions of identity. Native peoples have sometimes charged archeologists with literally stealing their history from them, by probing the genetic origins of remains and challenging their closely held foundational stories.

One place “Across Atlantic Ice” has been enthusiastically received is the white power blogosphere, an experience that its authors say has been frustrating and painful. One young writer, inspired by the Solutrean hypothesis, has already self-published a historical thriller called “White Apocalypse,” in which white settlers from Europe establish themselves in the Americas only to be massacred by the dark-skinned hordes that arrive later. To see the story this way, the authors point out, is to misunderstand what “Europe” even means in the time period when America was settled.

“Given what I’ve seen on the blogs, I want to emphasize that we are not saying these settlers were European in any modern sense,” says Stanford. “The Solutreans were paleo-Indians.”

The Solutrean migration, Stanford and Bradley argue, was just one of many migrations that peopled the new land, many of which undoubtedly originated in Asia. They argue that it was Solutrean technology that led to the Clovis tools, but there are many unknowns — including what became of the Solutrean people themselves, how they would have related to the many other pulses of immigrants, or what relationship they might bear to modern native peoples.

In the turmoil that is early American archeology, the questions are piling up — including the crucial one of where to look next. What archeologists find is shaped by what they expect. If the original Americans came by land, then one searches for artifacts along the most hospitable land routes. But if they came by sea, then it’s the ancient coastline — much if it now submerged — that will yield important answers in the future.

“We really have to go back to the drawing board and start over,” says Runnels.