The Mazongshan jade mine site is located in the HeyanHujingBaoer Grassland, 20 km northwest away from the Mazongshan town, Subei County. During October and November in 2011, Gansu Institute of Archaeology excavated the site based on the investigation happened in 2007 and 2008. The excavation was carried out in a 150 square meter area and obtained a great achievement. In order to further disclose the settlement pattern of the Mazongshan site, Gansu Institute of archaeology carried out the second excavation at the site during October and November 2012. This excavation laid out the squares near the excavation area of 2011 in the first locale and covered 700 square meters. There were 49 features discovered in all, including 38 ash pits, 9 house remains, 2 stone terrace base remains and over a thousand of artifacts. 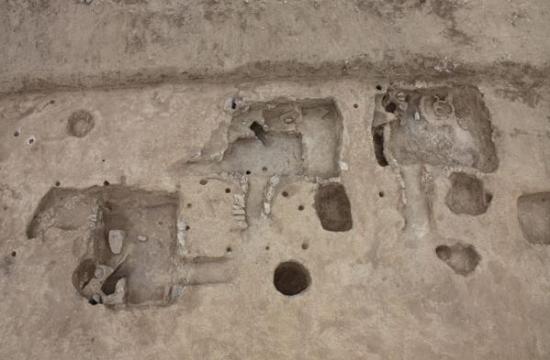 The house remains discovered in this excavation could be classified into two styles: ground buildings and semi-subterranean buildings.

The ground buildings could be classified into two types. Type A is upright post buildings on ground, in which the wall body could not be seen. F6 was the representative of this type, but it only had post holes and partial activity surface existed, and it is difficult to confirm its concrete structure at present. No collapsed walls were seen on the ground and only partial grey-white floor was remained. In addition, burned traces could be seen in some parts.

The semi-subterranean buildings were the main building style at the site and could be classified into four types. Type A was large in size and arranged in order. F1 and F2 were the representatives. F2 sit in west and faced east in slightly southeast –northwest direction. It was square shaped in plain and mainly consisted of post holes, door way and main room. There were 7 post holes located in both south and north sides of the house. There were 3 post holes in the north row and 4 holes in the south row. In addition, there were 2 door-ways, which were located in the south and north sides of the east part of the house, and were shallow square pits in plain. The main room was rectangular with a 300-352cm width in east-west, 584cm length in south-north and 100-110cm depth. The main room consisted of stone walls, stove, earth terrace, operation pits and activity surface. The stove was located in the southwest and was like a fan in shape.

Type C is simple in structure. F7 was the representative. F7 was near oval shape in plain and was about 470cm in south-north, 320cm in west-east. No door way was discovered. Four post holes were discovered surrounding the pit. An irregular square ash pit was discovered at the southeast bottom of the house and might have been the auxiliary buildings of F7.

Type D consists of varied pits. F10 was the representative. F10 mainly consisted of three pits--H39, H40 and H41. H39 was irregular in structure and there were a large number of rocks accumulations in the west. H40 was located in the southeast corner of H39. It was circle in plain, tubbiness in section and there was a stove pit paved with earth and stone at the bottom. At the bottom of the pit, there was an about 10cm thick floor surface, on which heaped up a large number of stone debris and rocks. Burned traces on the floor and some stones could be obviously seen. H41 was located in the northwest part of H39, circle shaped, bag shaped in section. Inside the pit, there piled up a large number of jade materials. In terms of the plain structure and the artifacts unearthed from different parts of the features, H41 was a storage pit; H40 was a stove pit and H39 was a production place. 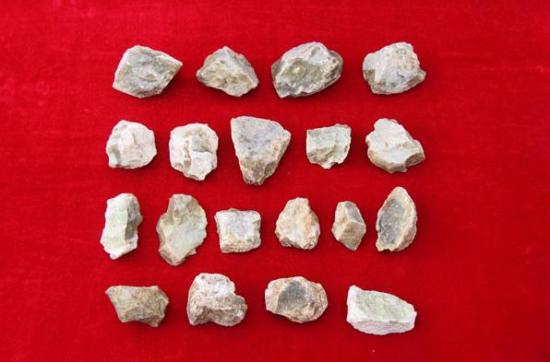 Through the investigation and excavation, the boundary and settlement pattern of the Mazongshan site were primarily known. There were minery, workshop district, defense installation district discovered at the first locale. The corresponding features mainly included mine pits, workshop remains and defense buildings such as lookout post. They could be dated from the Warring States period to Han dynasty.