Mayan cities, towns and villages are found hiding beneath rainforest

The discovery of the Mayan settlements has led archaeologists to believe that Mesoamerican people lived in more densely populated and organised societies than previously thought.

The remnants of nearly 1000 ancient Mayan settlements have been found hidden underneath the Guatemalan rainforest.

Researchers have discovered a total of 964 archaeological sites in a 650 square-mile radius in the southern half of the Mirador-Calakmul Karst Basin region, which also extends into Mexico.

At least 417 of the sites — dating predominantly back to the Preclassic period 2,000 years ago — have been identified as ancient cities, towns and villages.

They were located by aerial surveys using LiDAR ( Light Detection and Ranging) technology, a sensing method that uses light from a pulsing laser to collect measurements.

The surveys found an "extraordinary web" of elevated causeways, measuring over 100 miles, connecting the settlements. 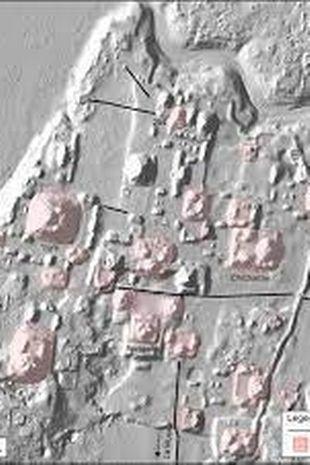 Researchers also located at least 30 ballcourts — suggesting that the occupants played some type of sport.

Previous studies suggested that settlements in the Maya Lowlands were sparsely populated.

But the findings of this study, led by Idaho State University archaeologist Richard D. Hansen and published in the journal Ancient Mesoamerica, suggest that Maya society was actually far more densely populated and organised than previously believed. LiDAR equipment has previously been used to map a city buried underground at Calakmul in Campeche, Mexico ( Image: Newsflash)

The research team said that they had found evidence of "extraordinary economic, political, and social power" as well as "unified and homogeneous religious and political ideology".

"Collectively, we argue that the development of infrastructure demonstrates the presence of complex societies with strong levels of socio-economic organization and political power during the Middle and Late Preclassic periods," the researchers wrote.

The study found that the pyramid Danta in the Maya city of El Mirador had a surface covering 205,508 limestone blocks, which would have taken 158 workers five years to quarry and that the entire building could have taken between six to 10 million days to build.

They said that the magnitude of labour required to build some of the structures found suggests that there was some type of "power" that would have been needed to organise the thousands of workers and specialists.

The archaeologists also claimed that the consistency of architectural patterns, ceramics, sculptural art and unifying causeway constructions suggested "a centralised political, social, and economic organic solidarity among the occupants".

Researchers were inspired to use lasers in the Mirador-Calakmul Karst Basin region because of the region's high concentration of Mayan cities and the previous success of LiDAR technology in Belize and Cambodia.