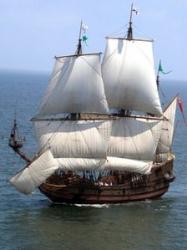 A reconstruction of the Mary Rose, which sank in 1545

Skeletons recovered from the wreck of a King Henry VIII's warship the Mary Rose are being studied to discover more about life in the 1500s.

Swansea University sports scientists are hoping to find out more about the toll on the bodies of archers who had to pull heavy bows.

It is documented that archers were aboard the ship when it sank in 1545.

The wreck was raised from the Solent in 1982, containing thousands of medieval artefacts.

The ship, which is now based in Portsmouth where a new museum is being built to house her, also had 92 fairly complete skeletons of the crew of the Mary Rose.

Nick Owen, a sport and exercise bio mechanist from the College of Engineering at Swansea University, said: "This sample of human remains offers a unique opportunity to study activity related changes in human skeletons.

"It is documented that there was a company of archers aboard when the ship sank, at a time when many archers came from Wales and the south west of England.

"These archers had specialist techniques for making and using very powerful longbows. Some bows required a lifetime of training and immense strength as the archers had to pull weights up to 200lbs (about 90kg)."

He said archers were the elite athletes of the Tudor age, requiring great skill and strength to fire up to 12 arrows a minute, holding a heavy bow in one arm.

"It is known that archers were on board as 'arm guards' that they used were found. But they don't know which skeletons they would be.

"So we are analysing the lower arm bones as those are the ones that are likely to show a difference," he said.

"In fact, on one of the skeletons we have looked at, the surface area of the joint between the lower arm and elbow is 48% larger than on the joint on the other arm."

Alexzandra Hildred, curator of ordnance at the Mary Rose Trust said that in the Tudor age, it was a requirement by law for every man and boy to practice archery regularly from an early age.

"Many of the skeletons recovered show evidence of repetitive stress injuries of the shoulder and lower spine," she said.

The Mary Rose, which was taken to a dry dock after being raised in 1982, is to have a new home

"This could be as a result of the shooting heavy longbows regularly.

"Being able to quantify the stresses and their effect on the skeleton may enable us at last to isolate an elite group of professional archers from the ship."

The team from Swansea's College of Engineering are basing their research on the bio mechanical analysis on the skeletons of the archers to examine the effect of a life of using very powerful longbows on the musculoskeletal system.

Part of the process of analysing the skeletons involves creating 3D virtual images so that measurements can be taken from the remains without causing any damage to them.

The results of the research are expected this summer and will be used to help with information for the new Mary Rose museum, which is due to open in the autumn.

Mr Owen said the work was important to understand the past.

"For the Mary Rose Trust, it's important because they know so much about the ship and every object on there - but nothing about the people on board," he said.

"They're trying to tell the human story. The new museum is going to have information about people who were on the boat.

"One of them will be an archer - from their injuries and stresses to the incredible feats of strength and endurance."

The ship sank while leading an attack on a French invasion fleet in 1545.

The wreck has undergone 17 years of conservation treatment since being salvaged.