Marlborough's Wairau Bar was the capital and cultural centre of New Zealand 800 years ago. Reporter Cathie Bell talks to Otago University archaeologists about the latest research findings on our country's first settlers.

Marlborough was once the capital of New Zealand. Home to a large settlement of the country's first settlers, the Wairau Bar was the ceremonial "homeland" where funerals and ritual celebrations were held.

Everything passed through the bar's town. Greenstone from the West Coast, obsidian from Lake Taupo, argillite from d'Urville Island.

Every sort of food was available and there were great feasts.

Settlement in Marlborough was no accident and neither was the huge flow of settlers from tropical east Polynesia.

Marlborough was chosen because it was the intersection of a number of zones - a mineral belt providing tools and adornment, horticulture zones enabling the growing of kumara, forests that were home to moa species, and the marine zone providing bountiful fish and seals.

For the past five years, Otago University scientists have worked to glean the secrets of the people who lived at the Wairau Bar.

Working for both Marlborough iwi Rangitane, who claim whakapapa to the first colonists, and the Marlborough District Council, who extended the Blenheim sewerage treatment plant but had the land excavated by archaeologists first, the university's archaeologists have studied the artefacts, middens and bones left behind.

A team from the university were in Marlborough a fortnight ago to present formally to Rangitane their findings, lead two fieldtrips to the sites to show iwi members where artefacts and remains were found and to discuss with the iwi and council what might be done in future.

Speaking at an evening presentation at the Rangitane cultural centre in Grovetown, university anthropology professor Richard Walter said the Wairau Bar site was a wonderful site.

"This is your treasure, this is actually a national treasure. One of my roles over the next few years is to promote the Wairau Bar. It's one of the most important sites in the country, and we all need to be getting more out of it than we are."

It was the first foundation site, the capital of the country, Walter said. It was where Maori society settled and grew to become the society encountered by Captain Cook.

The 11-hectare site was very rich, with the "most amazing array of artefacts", Walker said.

"They were an extraordinary rich and wealthy people. The Goldie model is all wrong. These were not people eking out an existence, trying to make a life in new lands.

"The first settlers to New Zealand were not small groups of people washed ashore half-dead. They were extremely wealthy, capable colonists who arrived en masse. They were well-equipped, well-resourced. They knew what they were doing."

The site 800 years ago was not the barren, windswept area it is today - it was higher above the sea, had vegetation growing on it, was a rich hunting ground of the moa, kumara could grow there, there was stone for tools in the Sounds. Cook Strait provides access to all coastlines, that's why Wellington is the capital now.

But once they got here, they didn't rest on their laurels. Walter said that within 10 years of arriving, Maori had identified all the stone tool sites around the country.

The Wairau Bar was the central place for exploration and support centre for the early community, he said. 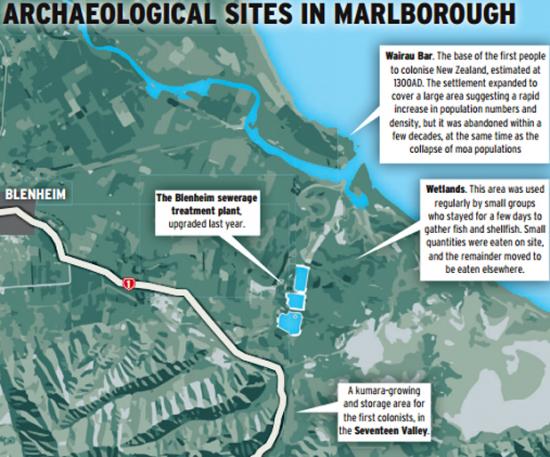 The work done by Canterbury University in the 1940s to 1960s at Wairau Bar achieved some major things for New Zealand archaeology, Walter said, demonstrating "once and for all" that the people here were "Polynesians, not something else". There were connections to east tropical Polynesia, with artefacts identical to artefacts from Tahiti.

"It also demonstrated growth here was very fast, sites here extraordinary rich. It was a sophisticated culture and society.

"However, it told us very little of the people who lived here in 1300s. That's what we were interested in. Why did they live here? What was their way of life? What could the Wairau bar tell us of the first settlement in New Zealand?"

Those are questions answered by bioanthropologist Hallie Buckley, who deals with bones, and biological archeologist Lisa Matisoo-Smith, who maps DNA, although both said that the answers then led on to more questions.

Buckley's work has shown there were definitely different types of people buried at the Wairau Bar.

They brought with them diseases such as gout and diabetes, ate a fibrous, gritty diet such as shellfish that saw them develop periodontal disease, and developed osteoarthritis in their necks from using their arms a lot.

Men were about 1.7m tall, women 1.57m. Some of those buried on the site definitely spent their childhood north of New Zealand, possibly in Hawaiiki.

Matisoo-Smith's work appears to indicate more than 700 women were included in the contingent colonists that arrived at the Wairau Bar.

As more genetic work has been done, the numbers of women in the group has got larger and larger.

The colonisation was sudden, she said. There was "instantaneous dispersal" with "astoundingly efficient exploration" and significant populations built up.

The Otago University scientists are keen to excavate further, as only 20 per cent of the sites have been investigated so far.

When they get to do that is dependent on reaching an agreement with the iwi.

Rangitane are keen to learn more about their ancestors.

Chairwoman Judith MacDonald said it was fascinating how the science was backing up the iwi's stories and beliefs.

The iwi would like more New Zealanders to know the history of Rangitane's ancestral site, but they also want to ensure that Rangitane benefits from that.

They would like to see Otago University set up a research centre in Marlborough and to help Rangitane young people learn the skills so they could investigate their own history. Part of the research centre would be a museum, to enable the return of artefacts found by both Otago University during the past five years and also those held by the Canterbury Museum since the 1940s.

Rangitane members are still smarting about the amount of ancestral material that is no longer in the iwi rohe or jurisdiction.

Walter said the 20 years of work Canterbury did till the 1960s took a huge amount of artefacts from the bar, some he described as "the most spectacular in the Pacific". So much was taken that for every one item that was on display, he said, there were between 300 to 400 in "the dungeons below" in storage.

Speaking after the evening presentation by university scientists at the Rangitane cultural centre in Grovetown, Hayne acknowledged the iwi desire, saying she had had the opportunity to see what the Rangitane aspirations were.

"We're in a process of meeting those with the capacity we have at the university . . . There are some easy wins for both in terms of the student issue."

Hayne had invited Rangitane to send its young people to study at Otago, highlighting that Maori students at Otago University were more successful than at any other university.

"The sky's the limit in what happens next."

Rangitane had aspirations for cultural tourism and that was a "beautiful fit" with what the university did. The relationship between university researchers and Rangitane was "very respectful" and had "constant communication", she said.

"People have brought their 21st-century talents to answer some very old questions."

Marlborough Mayor Alistair Sowman said the treasures of the Wairau Bar were something that needed to be shown to the public of New Zealand and the public of Marlborough.

That could include a "wing" of a proposed community cultural building, mooted for the riverside area next to the Taylor River, between High, Wynen and Symons streets. Marlborough Museum director Steve Austin has suggested including the Wairau Bar and wine exhibitions from the museum at Brayshaw Park. Those exhibitions deserved a wider audience than they were getting at Brayshaw Park, he said, and it would enable the museum to concentrate on being a "settlers' museum", more fitting with the character of the historical park.

It is expected that iwi and council staff will visit the university later this year, and although it is early days, there is enough goodwill and a huge number of inspirational findings that should see an appropriate celebration of New Zealand's first colonisers here in Marlborough.