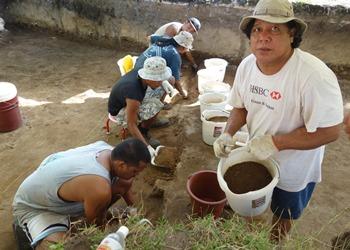 The establishment of human settlements in the Marianas 3,500 years ago required long-distance migration and may perhaps have involved the longest ocean-crossing in human history.

Dr. Michael T. Carson and Dr. Hsiao-chun Hung from Australian National University in Canberra continue to make progress with their archaeological study north of the House of Taga on Tinian as they examine what may be the earliest human habitation in the region.

Carson told Variety that previously, archaeologists concluded that the first remote-distance island settlement occurred in Melanesia and Polynesia about 3000-2800 years ago.

“Now we have found solid evidence of a significantly earlier settlement in the Marianas, plus it required an even longer distance of migration across the ocean, more than 2000 km from the nearest inhabited area,” said Carson.

For Carson, “That constituted the longest ocean-crossing in human history of its time 3500 years ago.”

He said that 3,500 years ago no other place was inhabited in the remote Pacific Islands. “The closest inhabited areas were more than 2,000 km distant in the Philippines.”

The area north of the House of Tage on Tinian where Carson and Hung are currently working was the site where Fr. Marcian Pellette uncovered finely decorated pottery — the earliest pottery of the Marianas — in the 1950s.

Following Fr. Pellete’s lead, Carson and Hung returned to the site in Dec. 2011 where they initially uncovered human remains in six burial sites.

Carson said, “The only burial features were in the upper layer of the site, associated with the latte sets of this area, dated approximately in the range of 1,000 through 300 years ago. All of the bones are staying in Tinian for respectful re-burial as soon as possible.”

He said that in the lower and older layers at the site, “We found abundant artifacts and midden, as well as remains of house structures.”

Carson said that the primary goal of their research is to learn about the most ancient habitation layer, dated nearly 3,500 years ago.

“We continue to uncover this lowest layer of the site, so we do not yet know all of the final details. So far, though, we are seeing a good picture of the shape of an ancient house floor and living area, composed of cobbles and boulders arranged as paving. Some of the cobbles and boulders were positioned in circular patterns as bracings for house-posts. We are finding concentrations of plentiful broken pieces of pottery, shell and stone tools, shell ornaments, and discarded food remains,” Carson told Variety.

The project is significant, Carson said, for learning about the first people who lived in these islands.

“At that time, 3,500 years ago, no other people were living in the remote Pacific Islands, so these ancient sites in the Mariana Islands give us valuable information about this critical point in human history. Other sites in Tinian, Saipan, and Guam all confirm this early dating and much the same intriguing early artifacts, including a distinctive red-slipped pottery with finely made decorations.”

The Carson couple sees a pottery trail extending from the Philippines to the Marianas.

Carson said, “Based on what we know so far in these different regions, we can trace a ‘pottery trail’ from Island Southeast Asia into the Pacific.”

He said the oldest trace was in the Philippines about 3,800 years ago or maybe earlier.

“The oldest in the remote Pacific Islands, however, was in the Marianas about 3500 years ago,” added Carson.

He explained to Variety that in the decorated pottery of both the Philippines and the Marianas, there were many of the same design motifs shared at the same time 3,500 years ago.

“We do not see the same type of pottery in any other parts of the Asia-Pacific region until slightly later,” he said.

He also described as “vaguely similar” other decorative styles about 3,100-3,000 years ago in parts of Indonesia.

“A more elaborate form of the same core design system is found in ‘Lapita’ pottery of the Bismarck Archipelago (east of New Guinea) about 3,400-3,300 years ago, and then it continues to be found 3,000-2,800 years ago elsewhere in Island Melanesia and West Polynesia,” said Carson.

He told Variety that they are just beginning to learn about these connections.

“We are re-thinking much of what previously was thought about the first people to inhabit the remote Pacific Islands,” he said.

The research being conducted by Carson and Hung is funded by the Chiang Ching Kuo Foundation and the Australia Research Council.