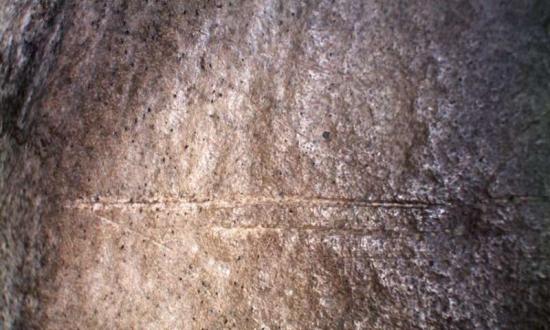 Cut marks on the bone as seen under a microscope. Credit: Greek Ministry of Culture

A new Lower Paleolithic elephant butchering site, Marathousa 1, has been discovered in Megalopolis, Greece, by a joint team of researchers from the Ephorate of Paleoanthropology and Speleology (Greek Ministry of Culture) and the Paleoanthropology group, University of Tübingen.
Marathousa 1 is located in an open-cast coal mine, on what was once the shore of a shallow lake. It has yielded stratified stone artifacts in association with a nearly complete skeleton of Elephas antiquus, as well as the exceptionally well-preserved remains of fauna (rodents, birds, amphibians, reptiles, mollusks and insects) and plants (wood, seeds, fruit). The association of lithic artifacts with the elephant remains, as well as the discovery of cutmarks on elephant bones, indicate that Marathousa 1 is an elephant butchering site. Preliminary results suggest a Middle Pleistocene age (roughly between 300 and 600 thousand years before present). The researchers found stone tools, which the early hunters are likely to have used to cut the meat from the bones. "That makes Megalopolis the only site in the Balkans where we have evidence of an elephant being butchered in the early Paleolithic," says Professor Katerina Harvati of the Senckenberg Center for Human Evolution and Palaeoenvironment (HEP) at the University of Tübingen.

Marathousa 1 is one of the oldest archaeological sites in Greece. The region is one of the most likely routes for human migration into Europe and also likely acted as a refugium for fauna, flora and human populations during glacial periods.

"Despite this crucial geographic position, Paleoanthropological and Paleolithic research has been under-represented in the region due to a traditional focus on later prehistory and Classical times. As a result, very little information exists on the Lower Paleolithic of Greece. Marathousa 1 is of paramount importance for the understanding of human dispersal patterns into Europe, as well as the adaptations and behavior of early humans in the region," says Harvati. 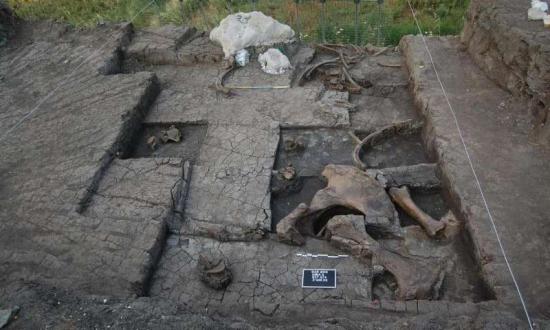 Excavation with some of the elephant bones exposed. Credit: Greek Ministry of Culture
The Marathousa 1 excavation is conducted by Dr. E. Panagopoulou (Ephorate of Paleoanthropology and Speleology) in collaboration with Professor K. Harvati (Paleoanthropology, University of Tübingen) within the framework of the ERC StG project 'PaGE' ('Paleoanthropology at the Gates of Europe: Human Evolution in the Southern Balkans') awarded to Professor Harvati. PaGE aims to help close the research gap in southeastern European Paleoanthropology. 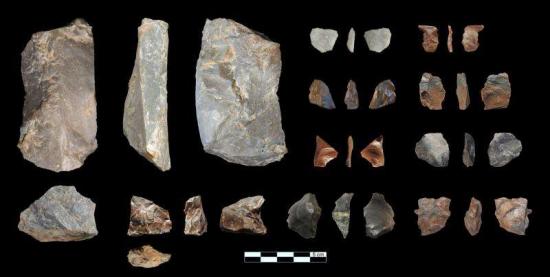