In the southern part of Zimbabwe lie the ruins of an urban community that probably existed for more than eight hundred years. This forgotten site may provide us with new knowledge about adaption to climate change and settlement in a marginal area. 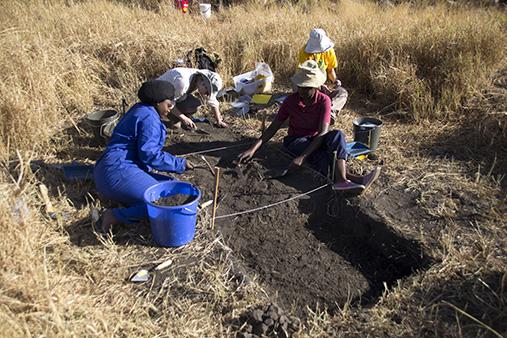 The excavation of Mapela is a collaborative project between the universities of Cape Town and Oslo, with funding from the research councils in both countries. (Photo: Per Ditlef Fredriksen)

Near the border with Botswana in the Shashi-Limpopo region lies Mapela, which is now an excavation site. The ruins of what is believed to have been a flourishing urban community for an astoundingly long period of time were first examined in the early 1960s. As a result of political developments in the country, which was known as Rhodesia at the time, the site was abandoned and forgotten by the archaeologists.

Until June 2013, that is. Then, new excavations started under the leadership of Dr Chirikure from the University of Cape Town. Chirikure and his team discovered a large area with massive stone walls, huge piles of fossilised animal excrement, pottery, spinning wheels and thousands of glass beads that testify to thriving trade with other countries, probably India and China. Carbon dating indicates that Mapela was as a flourishing community that existed continuously from the early 8th century until well into the 18th.

A section of Mapela Hill from the north: All the areas with dry yellow grass have evidence of human activity. Photo from the article: Zimbabwe Culture before Mapungubwe: New Evidence from Mapela Hill, South-Western Zimbabwe. PLoS ONE (2014).

‘Mapela lies virtually untouched in a rather inaccessible area, and is unique in several respects,’ says Per Ditlef Fredriksen, associate professor of archaeology at the University of Oslo. Since June 2014 he has been Dr Chirikure’s collaboration partner and head of the research project that will dig deeper into the ecological history of Mapela to find out more about how people and the environment mutually affected each other in the Shashi-Limpopo region.

Mapela is unique, but also one of many

Ecological history studies the complex interplay between people and the environment through the centuries.

‘In other words, the question is not only how people have adapted to climate change;  it’s also a fact that urban societies generate climate change,’ Fredriksen points out.

The forgotten stonewalled site at Mapela Hill will be used as a case study in the project, but this is only one of a number of urban, historical communities that have been discovered in the Shashi-Limpopo region. The more famous ruined cities of Khami and Great Zimbabwe, both on UNESCO’s World Heritage List, are also located in this part of Southern Africa.

‘We are undertaking excavations in several locations in the area to obtain a better understanding of the development of all these world heritage sites, since the relationship between them remains unclarified.’

More concerned with the common folk

Until now, researchers have been mostly concerned with the elite and the elite culture that has been uncovered in places such as Great Zimbabwe and other well-known historical sites in the region. The common folk, on the other hand, were not deemed to be of equal interest ‒ until now.

‘We wish to learn more about the relationship between the common population and the elite. Part of Mapela’s uniqueness is that this site shows traces of all the three elite cultures in the area. The material culture testifies to this fact,’ Fredriksen explains.

‘Especially the jewellery, but even the fantastically constructed stone walls are extremely rich in symbols. Our findings in Mapela include traces of the stone walls of Khami.’

Using climate data from the start

‘Climate and the environment have previously been topics raised in the debate over the urbanisation of Southern Africa. However, this new interdisciplinary project proceeds several steps further in the direction of natural science,’ Fredriksen says.

‘We include climate data at an early stage when establishing research questions. Our objective is to obtain a deeper insight into the associations between climate, environment and socioeconomic and political strategies.’

Today, Mapela is located in an underdeveloped and marginal agricultural area, and researchers have assumed that this was an arid region earlier as well, and that Mapela was a regional centre of little importance. New findings, however, indicate the opposite. 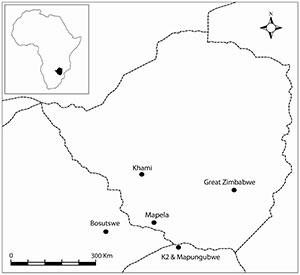 Mapela in relation to other important sites in the Shashi-Limpopo-region, in and around present-day Zimbabwe. Illustration from the article: Zimbabwe Culture before Mapungubwe: New Evidence from Mapela Hill, South-Western Zimbabwe. PLoS ONE (2014).

A society against all odds

Mapela must have been larger than the known locality of Mapungubwe, where the elite is thought to have lived. Perhaps even the climate was quite different in earlier times. 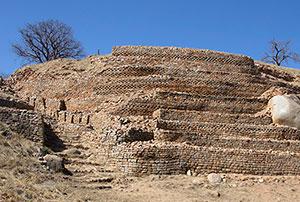 Khami (depicted) is already on the World Heritage List. There is a lot to support the inclusion of Mapela, too.

‘Was Mapela a community that existed against all odds?’

‘That is an extremely interesting question. After all, Mapela continued to exist for centuries, while other communities, such as Mapungubwe, perished. Why? This is one of the questions we will attempt to answer.’

‘Could this project provide new knowledge about the ways in which societies have adapted to climate change?’

‘It’s very complex, but hopefully we will be able to contribute to this,’ says Fredriksen. He refers to the achievements of the University of Cape Town in the field of climate research.

The project started in 2014 and will continue until 2017. It aims to shed new light on the relationship between people and the environment in the Shashi-Limpopo region in Southern Africa in a long-term perspective, from the 8th century to 1900. The forgotten urban community of Mapela is used as a case study.

The project will also help generate new knowledge on the prehistoric development of urban communities such as Khami and Great Zimbabwe, both of which are on UNESCO’s World Heritage List.

The collaboration involves researchers from a number of disciplines, such as archaeology, history, anthropology, geography and geosciences.