Excavations may shed new light on early modern humans and Neanderthals in the Levant. 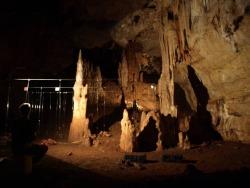 Situated in the western Galilee region of present-day Israel, Manot Cave lies about 10 km north of the Hayonim Cave site and 50 km northeast of the well-known Mt. Carmel cave sites. Although less-known than the well-publicized prehistoric "sister" sites of Qafzeh and Kebara, the cave has recently yielded evidence of human occupation dated back to at least Upper Paleolithic times, when early modern humans and Neanderthals are suggested to have coexisted around the Mediterranean and further north into present-day Europe. Adding to evidence uncovered at other similar locations, scientists hope that the finds of the cave will help elucidate the story of early modern human and Neanderthal existence in the Levant, and perhaps even help answer questions related to one possible stage in the spread of modern humans from Africa to Europe. 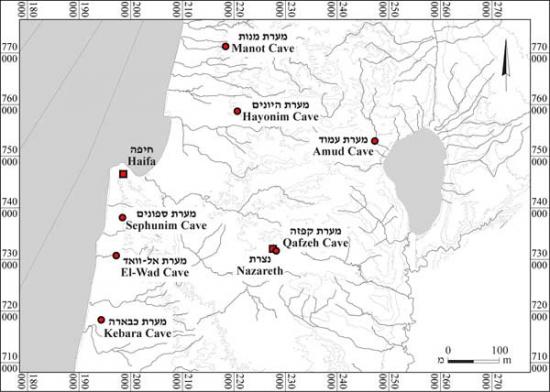 Now, a team of archaeologists from the Israel Antiquities Authority, along with students and volunteers, will return to the cave site during the summer of 2013 and reopen an investigation that began first with a 2008 survey and 2010 excavation that turned up some promising signs. The finds are particularly significant in light of the fact that the cave was blocked by natural rockfall about 15,000 years ago, sealing it from further disturbance by any subsequent natural or human elements.

It was first discovered during construction activity in 2008 that damaged the roof of the cave. A research team from the Cave Research Unit of Hebrew University of Jerusalem was quickly called in to survey the site. In that survey, they recovered a human skull, later determined to be that of an anatomically modern human, and other archaeological remains that were reported to the Israel Antiquities Authority (IAA) for further exploration. The IAA subsequently conducted another survey in 2008 and then a full-scale excavation in 2010.

In addition to the human skull remains, the investigations have thus far revealed Middle and Upper Paleolithic (250,000–15,000 BP ) lithic artifacts, charcoal remains and an abundance of faunal remains, including animal bones. Reports the IAA investigators: "Notable among the lithic components were Middle and Upper Palaeolithic tools and cores. The tools consisted of a Levallois point, typical of the Mousterian [commonly attributed to Neanderthals] culture. The Upper Paleolithic component included burins, bladelets, overpassed blades. Notable are Aurignacian tools, such as nosed and carinated endscrapers." Also found was a polished bone pendant. [1] 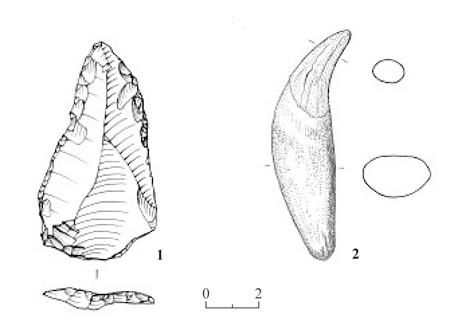 A Mousterian point (Middle Palaeolithic) and a carnivore canine from the 2008 survey. Courtesy Israel Antiquities Authority 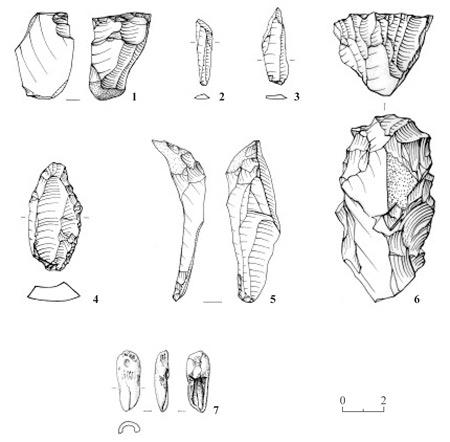 "The fieldwork at Manot shows great research potential", reports the IAA. "The archaeological finds recovered so far attest to a cave inhabited from the Middle Paleolithic through the Epipalaeolithic periods (250,000–15,000 BP), when it was naturally blocked. The characteristics and composition of chipped stone tools, animal bones and bone tools suggest that occupation in the cave was intensive during the Upper Palaeolithic period." [1]

Speleothems (secondary mineral deposits formed in the cave), which predate human occupation, were found in abundance throughout the cave. Scientists will use speleothem samples to date the human occupations using U-Th dating and isotopic analysis, which will also be helpful in reconstructing the paleoclimate in which the cave existed.

"In sum", concludes the IAA reporters, "the excavation project at Manot is expected to shed light on one of the most important phases in the history of mankind, the surrounding faunal world and the climate and environment men had to cope with in the Eastern Mediterranean region." [1]

More about the Manot Cave excavations can be found at the Manot Cave Preliminary Report page, and information about how one can participate is located at the Findadig website of the Biblical Archaeology Society.