The Prehistoric Treasure In The Fields Of Indiana 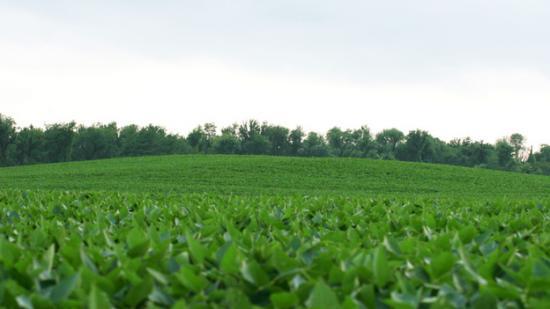 Indiana State Museum and Historic Sites - Located near Evansville, Ind., the Mann Hopewell Site boasts around 20 mounds built by the Hopewell Tradition, a way of life that flourished in the Eastern and Midwestern U.S. nearly 2,000 years ago.

It's 1988. Workers building a road in Mt. Vernon, Ind. damage an ancient burial mound, causing a treasure trove of silver and copper to pour from the ground.  A bulldozer operator decides to grab some of the treasure. He ends up in prison for looting.

It sounds like the plot of an Indiana Jones film, only it's not a movie. The treasure belonged to a mysterious and advanced culture that flourished in the Eastern and Midwestern U.S. nearly 2,000 years ago. Because it predates the written record, this prehistoric culture doesn't have a Native American name but in the 1800s, archaeologists dubbed it the Hopewell Tradition. 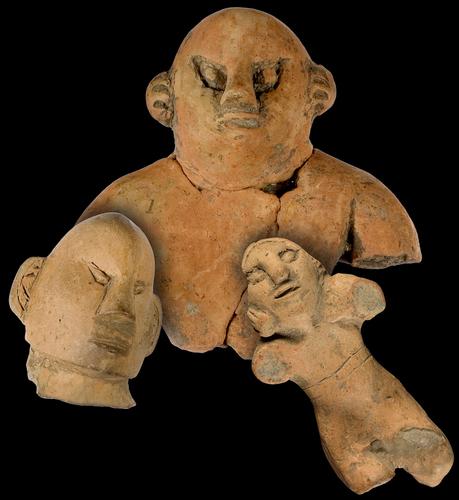 Indiana State Museum and Historic Sites  -  Clay figurines discovered on the Mann Hopewell Site show faces with slanted eyes, which were not a Hopewell feature.  Some believe the figurines show a connection between Indiana and Central or South America.

An exhibit of artifacts from the Hopewell site, curated by the Indiana State Museum and on display at the Angel Mounds State Historic Site in Evansville, Ind. through Jan. 14, is raising some fresh questions about these ancient Americans.

The Treasure In The Fields

Just a few miles away from where the road workers first discovered their treasure lie fields of cornstalk stubble and gently rolling hills. But they're more than just hills.

"What you're seeing here is a complex of earthen structures that were very purposefully and very specifically built along this cultural landscape," says Michele Greenan, an archaeologist and curator at the Indiana State Museum.

"There's a number of mounds here — probably 20, maybe even more mounds, earthen architectural features that were built for different purposes," like ceremonies or burial, she says.

The fields are called the Mann Hopewell Site, after the farmer who owned their sprawling 500 acres. Two of site's earthen structures are among the biggest mounds built anywhere by the Hopewell, which was not a tribe so much as a way of life that flourished in the Eastern and Midwestern U.S. between about A.D. 100 and 500.

Amateur archaeologist Charlie Lacer began walking the Mann fields in the 1950s, collecting what he found along the way.

"You could find stuff that you could not find [on] any other site around here," Lacer says. "I mean, there [were] just tons of materials there. You couldn't pick up everything you saw — you had to be kind of selective, particularly if you were carrying this stuff in your pockets."

Lacer managed to stuff a lot into his pockets — 40,000 artifacts that he donated to the Indiana State Museum two years ago. Four hundred of those pieces are now on display in nearby Evansville for the first time ever.

The exhibition is titled Cherished Possessions: The Mann Hopewell Legacy of Indiana. It was nearly called Indiana's Egypt, but the attempt at archaeology a la Indiana Jones lost out to historical precision. Still, it's almost-name does give a sense of the Mann Hopewell Site's importance. 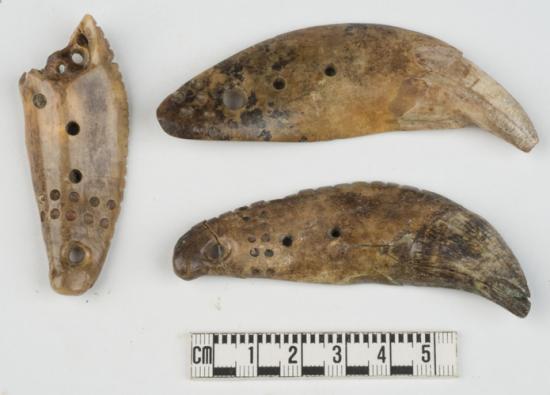 Indiana State Museum and Historic Sites  -  The discovery of incisor teeth from grizzly bears, which are not native to Indiana, shows that Hopewell residents of the Mann Hopewell Site had contact with the North American West, where grizzly bears are more common.

"It's like Vegas ... for archaeologists," says Mike Linderman, who manages state historic sites in western Indiana. Linderman says the Mann Hopewell Site is bigger than its more famous Hopewell counterparts in Ohio, and it's filled with even more exotic materials, like obsidian glass that has been traced to the Yellowstone Valley in Wyoming, and grizzly bear incisor teeth.

"Grizzly bears obviously are not from Indiana, never have been," Linderman says. "There's a theory out there now that instead of being trade items, these items [were] actually being collected by the people from Mann Site on rite-of-passage trips they [were] taking out to the West. You know, it's something big if you've killed a grizzly bear and you can bring its teeth back to Indiana."

Jaguars and panthers aren't from Indiana, either, but they show up at the Mann Hopewell Site as beautifully detailed carvings. Put them together with clay figurines that have slanted eyes — not a Hopewell feature — and Linderman says we could be looking at a connection between Indiana and Central or South America.

And that just scratches the surface, so to speak. In 2006, researcher Staffan Peterson did the archaeological version of an MRI scan on 100 acres at the site. Whenever his equipment detected an archaeological feature, a dot showed up on a map.

"Every day, we'd download our data and our jaws would drop," Peterson says. "It was kind of like buckshot, there were so many. And we were able to map out upwards of 8,000 archaeological features."

Two of the most notable features are what Peterson calls "wood henges" — like Stonehenge, but made of wooden posts — which he believes may be one of a kind in the U.S.

But there may be an even more remarkable discovery — one that could rewrite history books. Linderman says scientists are starting tests on what looks like evidence of lead smelting, a practice that, until now, was only seen in North America after the arrival of the French, 1,000 years after the Hopewell Tradition.

Lead smelting is just one of the many questions archaeologists will be targeting in upcoming digs that they hope will clear up at least a few of the Mann Hopewell Site's — and American prehistory's — mysteries.

"It's a sleeping giant," says museum curator Greenan, "and it's going to take its place as one of the most important archaeological sites in North America."