Implements or weapons made of quartz and quartzite unearthed among tons of bones under a Siberian village called... Mammoth.

The age of the huge bone haul is believed to be between 17,000 and 11,000 years old. Picture: Sergey Leshchinsky

The bones uncovered here during a summer 2015 excavation are believed to include some of the 'youngest' mammoth remains in a 'mass grave' anywhere in the world. The presence of tools shows ancient man was at this 'crime scene' as the extinct woolly mammoths were dying out. The age of the huge bone haul is believed to be between 17,000 and 11,000 years old.

Experts believe generations of woolly mammoths stomped across the taiga to this spot to die, either from bone disease or to be killed in an enfeebled state by Paleolithic man's spears.

Among the finds in Novosibirsk region are 11 telltale stone implements  likely used to butcher the animals and for the processing of tusks and bones. Paleontologist Sergey Leshchinsky, of Tomsk State University, said: 'The artifacts and animal bones were found at the same level. It shows that man and mammoths saw each other: that is, they existed at the same time.

'The main reason for people to come to places crowded with large mammals is obvious. They came here to effortlessly extract the tusks and skins of dead animals or to hunt weakened individuals, including the youngsters. One thing is clear: the people whose implements were found in Volchya Griva witnessed the mass natural mortality of the mammoths.' 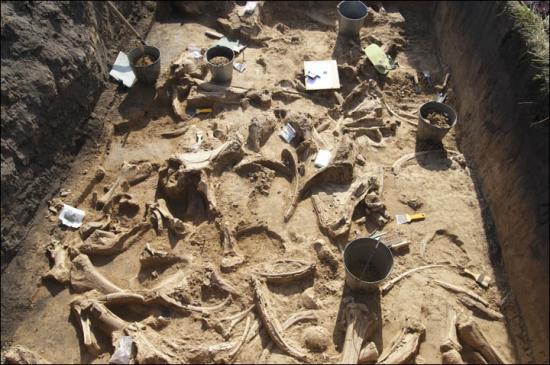 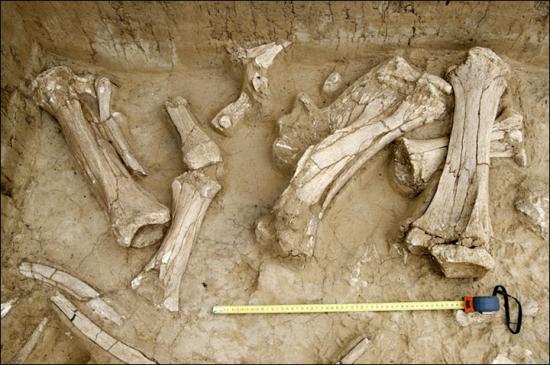 Experts believe generations of woolly mammoths stomped across the taiga to this spot to die, either from bone disease or to be killed in an enfeebled state by Paleolithic man's spears. Pictures: Sergey Leshchinsky

Volchya Griva is the name given to the site at  Mamontovoye - or Mammoth - village, where the remains have been found. 'Without exaggeration, we can say that this is one of the largest cemeteries of mammoths in Asia,' he said.

'Previously it was thought that the greatest concentration of mammoth bones was recorded at Berelekh (in the north of the Sakha Republic or Yakutia, also in Siberia), but our  excavations show that at Volchya Griva it was higher by more than two times.' 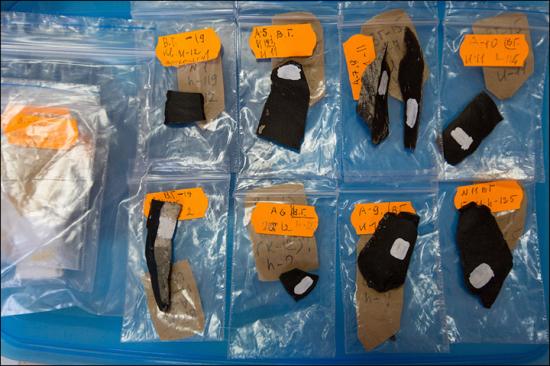 The implements are now being examined in Novosibirsk by Professor Vasily Zenin, deputy director of the Institute of Archaeology and Ethnography at the Siberian Branch of the Russian Academy of Sciences. Pictures: Vera Salnitskaya

The implements are now being examined in Novosibirsk by Professor Vasily Zenin, deputy director of the Institute of Archaeology and Ethnography at the Siberian Branch of the Russian Academy of Sciences. Intriguingly, he revealed that the stone used for these tools or weapons was 'not local' and must have come from a site 'hundreds of kilometres' away.

'The closest sources of such stone are in the East Urals, Kuznetsk Alatau, the Kazakhstan low mountains, and the Tom River,' he said. 'All these are hundreds kilometres from Volchya Griva.'

He added: 'We do not know from where the stone for the implements was taken. It is big question.' But it shows that ancient man either travelled a long way to slaughter the mammoths or raid their tusks and bones, or that the implements were brought from far away.

While man was clearly here, Prof Zenin says there are, as yet, 'no traces of human habitation here'. There is an absence of fireplaces and relatively few implements.

'We suppose now that humans came here periodically, and took meat, skin and tendons of dead animals. Probably they killed the weakened ones. But it doesn't look as if they remained here for a long time. Yet I do not exclude that we just did not find the remains which will show us that the humans did in fact live here.'

The bones are being dated and results will be known by early next year. So why exactly did the mammoths come here to be slaughtered by ancient man, or to die of their own weakness?