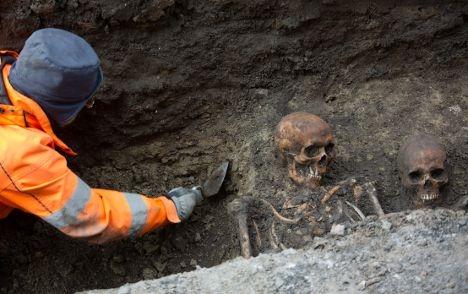 A worker removes soil near one of the skeletons.

More than a dozen human skeletons have emerged from beneath a Malmö street in a "macabre" find that left workers startled and onlookers thrilled. But archaeologists reacted differently to the discovery.

The human remains, which include both adults and children, were discovered last week beneath the pavement along Djäknegatan in Malmö's old town, as workers installed a district heating system.

"We learned about the skeletons on Wednesday but decided to keep it a secret so we could work in the area without attracting a lot of attention," archaeologist Pär Sarnäs told The Local.

On Monday, however, onlookers and journalists gathered at the excavation to marvel at the sight of an estimated twenty skeletons in the area that used to be a cemetery.

"People have long been fascinated by death and human mortality," Sarnäs said. "Seeing skeletons like these both attracts and frightens people."

Passerby Henrik Edström was one of many who stopped by on Monday for a look.

"It's thrilling but at the same time macabre to see vertebrae sticking out," he told the local Sydsvenskan newspaper.

The area served as a cemetery for the old Malmö hospital between 1690 and 1820, Sarnäs explained.

"Most of the buried were the sick and poor, as it was somewhat cheaper to be buried in this cemetery," he said, but added that the find was of "limited" archaeological value. The site was already well-known to historians and thoroughly documented, but he nevertheless called the find "surprising".

"It's still quite remarkable. We didn't know there were any (remains) still here after all the building in the area over the years," he said. Sarnäs and his team have started to gather up the remains to ensure none of the bones are stolen. He has also contacted the Church of Sweden about finding a way to rebury the bones.

"I'm hoping we can bury them elsewhere, but I'm not exactly sure if that's possible," he said.