The Maiping site in Hanyuan, Sichuan

The Maiping site, locate at the Maiping Village of Hanyuan County in Sichuan Province, have been excavated by Sichuan provincial Cultural Relics and Archaeological Institute from September 2009 to April 2010. An area of about 8500 square meters has been unclosed, which yields many important achievements.

Archaeological remains from the Shang-Zhou dynasties include house sites, ash pits and tombs, which yield stone wares, ceramics, jade wares and bronze wares. These relics show two kinds of different cultural traits. One is the typical Shu culture, which could be seen from the ash pits and topography layers. The typical objects are jars with a small flat bottom, cups with a sharp bottom and cups with a high stem. The other is the local culture, represented by those objects from the Shang-Zhou dynasties tombs, including jars with a sharp bottom, big jars with a flare mouth, pedestals, bronze bracelets and bronze rings.

Tombs from the Shang-Zhou periods are mainly distributed in the middle by east of the site. Totally 80 tombs were unearthed, which are arranged in a triangular shape and mostly oriented 20° north by west. They are rectangular pits with 3.6-4.5 m long and 0.8-1.5 m wide, containing skeletons placed in an extended supine position. The burial objects, with only the Dou-shaped objects and bronze daggers resembling contemporary objects from the Shu cultural sites, mostly are the first finds displaying a strong local style.

The placement of burial objects follows same rules, usually with a big jar with a flare mouth and a lid near the head, two sharp-bottomed vases on the two sides respectively, a Dou-shaped objects on the right side, animal bones and sometimes a pedestal on the left side, and three sharp-bottomed jars paralleling to each other near the feet, each supported with three or more ceramic stands. The cultural appearance of these objects remains uniform. They have five types of combinations as following: 1. bronze dagger and arrow heads on the left side, nose ring, earrings and bracelets; 2. bronze dagger and arrowheads on the left side; 3. only arrowheads on the left side; 4. only ceramic spindle wheels outside the right knee and 5. without any object. 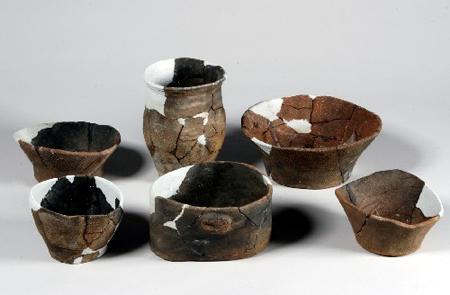 Remains from the Neolithic period are abundant, including house sites, pit tombs, stone coffin burials, kiln sites and ash pits etc.
The house sites from Late Neolithic could be categorized into four types as buildings with mud-wooden walls, stilt style buildings, shack-shaped buildings and buildings with piled walls, in which buildings with mud-wooden walls are in the majority. From a historical perspective, the architectures in the Maiping site went through a process from ground buildings to stilt style buildings, which provide invaluable materials for studying the changes of environment from 4500-5000 BC in the middle reaches of the Dadu River as well as the living styles of ancient people.

There are two forms of Neolithic tombs. One is stone coffin burials, near 30 in quantity, yielding mainly ceramics, and some bone wares and microlithic tools. Ceramics include jar with a loop handle, jars with a flare mouth, jars with a long neck and Zun-shaped vessels. They are hitherto the earliest stone coffin burials in Sichuan region. The other form is shaft pits in rectangular shape, which total 50 more, concentrated and well arranged. The combinations of burial objects are basically same, including jars with a high neck, ceramic spindle wheels and bowls with a flat bottom.

Neolithic ceramics from the Maiping site are mainly red-brown sandy wares. There are also some polished wares and clay wares. Ceramics are mostly hand-made, decorated with fine rope patterns and embossed patterns. Wares with a flat bottom are very common. Some have a ring foot or round bottom. The combination of objects is usually jars with a flat bottom and a flare mouth, urns, polished ceramic bowls and cups. The stone wares are mainly polished stone tools. Some chipped stone wares could also be seen together with microlithic tools. The polished stone wares are mainly axes, adzes, knives and chisels. There are also fishing-net weights, awls, objects with two blade-ends and arrow heads. Among the chipped stone wares scrapers, points, gravers and stone cores are the commonest.

The cultural deposit in the Maiping site exhibits strong local characteristics. The discovery and research could provide important materials for founding the system types of the archaeological cultures in the middle reaches of the Dadu River and its vicinity, as well as for studying the evolution and exchanges of the pre-Qing cultures and formation of local ethnic groups in the Hengduan Mountain regions.    （Translator：Tong Tao）