English monuments, including Maiden Castle and Windmill Hill, found to have been built, used and abandoned in single lifetime 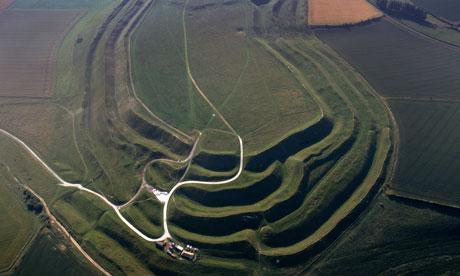 Maiden Castle hill fort in Dorset. Archaeologists have found that a causewayed enclosure nearby was created during a building spree in 3700 BC. Photograph: Angelo Hornak / Alamy/Alamy

A new scientific dating technique has revealed there was a building spree more than 5,500 years ago, when many of the most spectacular monuments in the English landscape, such as Maiden Castle in Dorset and Windmill Hill in Wiltshire, were built, used and abandoned in a single lifetime. 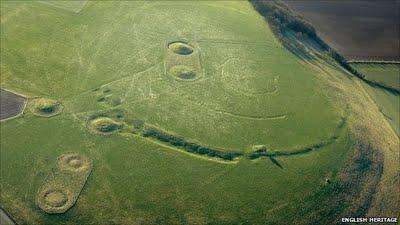 The fashion for the monuments, hilltops enclosed by rings of ditches, known to archaeologists as causewayed enclosures, instead of being the ritual work of generations as had been believed, began on the continent centuries earlier but spread from Kent to Cornwall within 50 years in about 3700 BC.

Alex Bayliss, an archaeologist and dating expert at English Heritage, said: "The dates were not what we expected when we began this project but prehistorians are just going to have to get their heads around it, a lot of what we have been taught in the past is complete bollocks."

Bayliss worked on the new dating system with Professor Alasdair Whittle of Cardiff University and other experts, combining hundreds of thousands of scraps of dating evidence, obtained from the last century of excavations, on Cardiff's computers. They matched notoriously imprecise carbon-14 dates from organic remains – which can have a margin of error of centuries – with all the other evidence from archaeological finds, narrowing the dates for sites from centuries to decades.

"The old techniques gave us such imprecise results that it's like taking the Napoleonic wars, the first world war, the second world war and the computer revolution and insisting that they're all contemporary.

"Now we can narrow that down dramatically. You take a granny with a good long life living near Windmill Hill in Avebury, she could have seen her family start the enclosure as a child, see it fall out of fashion and them turn to building barrows, and then return to do more work on the enclosure, all in her lifetime."

Although some sites were used for generations, the evidence suggests others were built with enormous effort, and then used only once or on a handful of occasions.

"Their construction may have been sparked by a critical mass of population, power and goods to trade around 3700 BC. It's the Swinging Sixties, everything changes – new wealth, new goods."

Bayliss added: "We began by looking at the evidence from the causeway enclosures but then to get the story into which they fit, we ran every other carbon date taken for the period. What we found is that the spread of agriculture was far more rapid than we had believed.

"It took two centuries for agriculture to reach Cheltenham from London – and then just 50 years to get from Cheltenham to Aberdeen."