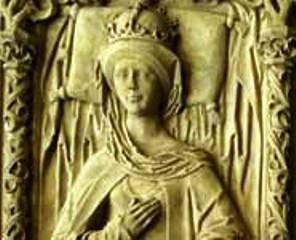 Figure of Queen Eadgyth on top of the cenotaph from 1510
Image by Reinhard Ulbrich, LDA Halle

When German archaeologists discovered bones in the tomb of Queen Eadgyth in Magdeburg Cathedral, they looked to Bristol to provide the crucial scientific evidence that the remains were indeed those of the English royal. Dr Alistair Pike in the Department of Archaeology and Anthropology tells Hannah Johnson how tiny samples of tooth enamel proved the identity of a Saxon queen. 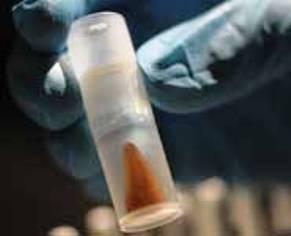 One of Eadgyth’s teeth surrounded by synthetic material for preparation of a thin section for age determination
Image by Juraj Liptak, LDA Halle

Teeth provide remarkable evidence about the early years of an individual’s life. The region where a person grew up can be traced in the tooth enamel laid down in their first 14 years because strontium and oxygen isotope ratios in the teeth reflect the food a person ate and the water they drank.

When rocks form, they contain minute traces of radioactive rubidium 87, which decays to strontium 87. Over millions of years, the ratio of strontium 87 to the stable isotope strontium 86 changes, so, in very young rocks, the ratio will be smaller than in very old rocks.

These rocks weather and become the soils where animals are grazed and crops grown. Some of the strontium in the soil gets into the meat and cereals produced from it and then into the teeth of the people who eat them. The strontium ratio in a person’s teeth thus mirrors the strontium ratio of the geology of the area in which they spent their childhood. For example, someone who grew up in southern England would have a much lower ratio than someone from the Highlands of Scotland where the rocks are much older.

The rainfall of the area is also echoed in tooth enamel. Water contains oxygen isotopes with different masses and the lighter (oxygen 16) isotopes evaporate before the heavier (oxygen 18) ones. This means that when the sun shines on the ocean and creates clouds, those clouds have more oxygen 16 than the ocean does. However, when the clouds fall as rain, the heavier, oxygen 18 isotopes fall first.

Thus, in the case of Northern Europe where most of the rainwater is evaporated from the Atlantic and blown across the continent in a westerly direction, the rain with more of the heavier oxygen 18 isotopes falls in Ireland. The amount of oxygen 18 in the rain gradually decreases as the weather system moves across Europe, so the drinking water of someone who spent their early life on, say, the west coast of Spain has a different ratio of oxygen 16 and 18 than that of someone who was a child in Central Europe. These different ratios are also preserved in their tooth enamel.

Archaeologists at the University of Mainz took a few average values of the strontium isotopes in teeth found in Eadgyth’s tomb and compared them with those of other Magdeburg burials. The isotope ratios were completely different, thus indicating that the ‘Eadgyth’ teeth did not belong to someone who grew up in the area. To discover where exactly the individual came from, however, the German team needed to call on the expertise of Dr Alistair Pike and his colleagues at Bristol.

Over the past three years, Dr Pike has been perfecting a new micro-sampling technique which involves using a laser to take tiny samples from along the growth axis of a tooth. As tooth enamel is formed incrementally from the crown, a series of isotopes representing every year, every month – and possibly even every week – of a person’s life is laid down layer by layer in the enamel. Using the laser allows for up to 2,000 measurements to be taken from a single tooth (earlier techniques allowed only four or five), thus creating a highly detailed picture of an individual’s movements throughout the first 14 years of life.

The isotope values taken from the ‘Eadgyth’ teeth were compared with those on the Natural Environment Research Council’s geological map of strontium ratios across Great Britain and the British Geological Survey’s map of oxygen isotope values for European drinking water. Combining the results pinpointed the chalk regions of southern England as the place where the individual grew up, thus indicating that she was indeed the Wessex-born Eadgyth.

The truly remarkable discovery, however, was that these isotope results closely mirrored the facts of Eadgyth’s childhood and adolescence known from historical records. Variable strontium ratios in the tooth enamel laid down in Eadgyth’s early years indicated that, during this period, she lived in a number of different locations. This reflected the fact that, in the first eight years of her life, Eadgyth probably changed her domicile frequently as she moved around the kingdom in the entourage of her father, King Edward the Elder.

The isotope values then became constant, suggesting that, from the age of nine, she stayed in the same place. History records that her parents divorced in 919 when Eadgyth was between nine and ten. She and her mother were banished to a monastery, possibly Winchester or Wilton in Salisbury, where she remained for a number of years.

Dr Pike and his team have also used the technique that identified Eadgyth on teeth, both human and animal, from a number of archaeological sites around the world. The remains of cattle from a Neolithic village in the Swiss Alps, fossil orangutans in Borneo, and the 13 victims of a 4,500-year-old, Stone Age massacre buried at Eulau, Germany, have all been analysed – often with unexpected results.  For example, the fairly constant isotope values of the orangutans’ teeth suggested the animals didn’t move from place to place as much as the researchers had assumed.

Isotope analysis allows these remains to ‘speak’ in ways previously unimagined. In the case of the Eulau burials, it has shown that not only did the women originate in a different region from the men (suggesting either inter-marriage or the forced abduction of women for wives) but also that the closest possible origin was the Harz Mountains more than 50 km away. The variation of the isotopes in the women’s teeth also suggests they were from a more mobile society, perhaps one practising pastoralism in the mountains. Combined with other evidence, the isotope values mean archaeologists are coming closer and closer to pinpointing the exact region from which the women came.

To be able to tell in such detail what people and animals were doing from year to year isn’t just remarkable, it’s a revolution. The science of skeletons is allowing archaeologists to gain information about what happened to people throughout their lives, not just at the time of their deaths. It’s like someone discovering a new type of artefact, Dr Pike believes, new objects never seen before. These ‘objects’ happen to be isotopes but, thanks to cutting-edge science, they can speak about our past as eloquently as any axe-head or bowl or pottery shard.

Eadgyth was the granddaughter of Alfred the Great and the half-sister of Athelstan, the first acknowledged King of England. She was sent to marry Otto, King of Saxony, in AD 929, and bore him at least two children, before her death, at around the age of 36, in AD 946. Buried in the monastery of St Maurice in Magdeburg, historical records state that her bones were moved on at least three occasions before being interred in an elaborate tomb in Magdeburg Cathedral in 1510. It was long assumed that this tomb was empty, so, when German archaeologists opened it in 2008 as part of a wider research project, they were surprised to discover a lead box bearing the inscription ‘EDIT REGINE CINERES HIC SARCOPHAGVS HABET…’ ('The remains of Queen Eadgyth are in this sarcophagus…').

The box contained partial skeletal remains along with textile material and organic residues. However, as medieval bones were moved frequently and often mixed up, the archaeologists needed to conduct a number of scientific tests to determine whether the remains were, indeed, those of Eadgyth.

Anthropological study carried out at the University of Mainz confirmed that they belonged to a single female individual who was between 30 and 40 years old when she died. One of the femur heads showed evidence that the individual was a frequent horse rider, thus hinting at nobility, and isotope analysis suggested that she enjoyed a high-protein diet, including a large quantity of fish, which would also indicate a high-status aristocratic lady.

Dating of the associated textiles in the lead box produced the correct range of dates for Eadgyth, but it remained for Dr Pike and his team to provide the key evidence to show that the bones were indeed those of Eadgyth and thus the oldest surviving remains of an English royal burial.