When the Legions of Christ, bought a piece of land on the western shore of the Sea of Galilee, little did it know what it would find. 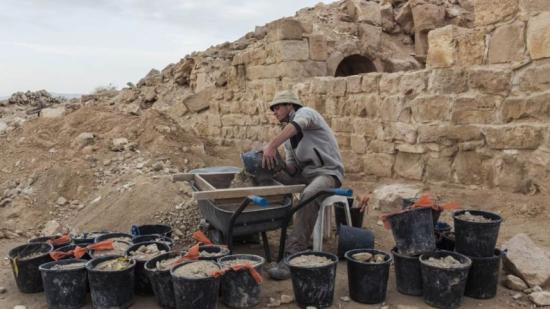 This ancient mosaic of Jesus Christ is from Turkey, where Aramaic was the common language at the time of his life.Photo by Wikimedia Commons

Some would call it luck, others coincidence. Father Eamon Kelly calls it "providence."

When his Catholic organization, the Legions of Christ, bought a piece of land on the western shore of the Sea of Galilee, little did it know what it would find.

When people think of Jesus, they usually think of Bethlehem or Jerusalem, Kelly points out. But Jesus spent almost his entire life and ministry in what is now northern Israel.

He stands on what are likely ruins of the ancient town  of Magdala, thought to be the home of Jesus' best-known female disciple, Mary Magdalene. The waterline of Israel's only sweet-water lake shimmers in the distance.

It took his organization several years to buy and acquire permits for four adjacent plots of land on which to build a pilgrims' hotel, an inter-faith chapel, a restaurant and a women's shelter.

But in Israel, archaeological excavations are compulsory before any construction can begin. 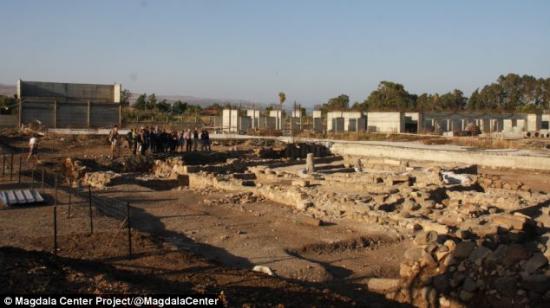 The synagogue ruins, pictured, were first uncovered in 2009 and they are thought to date back 2,000 years

When archeologists and volunteers started digging, they were astonished to find a treasure: A 1st-century synagogue, one of only seven in Israel - and in the entire world.

"This is the first synagogue ever excavated where Jesus walked and preached," says the father, calling it "hugely important" for both Jews and Christians.

Experts say it's highly likely that Jesus would have preached in the recently uncovered synagogue, believed to have first been built in the year 1 as a simple structure which was then upgraded into a more ornate one in the year 40.

Until Tiberias was built, the only town on the western shore of the Sea of Galilee was Magdala.

Anyone touring the region, as Jesus did according to the New Testament, teaching and preaching in synagogues all through Galilee, would not have skipped Magdala, located on the Via Maris - the ancient trade route that ran along the Mediterranean and the western shore of the Sea of Galilee all the way from Egypt to Syria.

"He was a clever rabbi. He knew where to set up shop," says Kelly. "If you walk from Nazareth to Bethsaida to Capernaum, you're going to come out here."

Matthew 15:39 also mentions Jesus setting foot there, saying "and he took ship, and came into the coasts of Magdala (sometimes also translated from the Greek as Magadan)."

In the times of Jesus, people would gather in local synagogues to meet and assemble, not just for prayer.

"So if a strange rabbi came to town, a new rabbi, a new preacher, a new teacher, the logical place was to meet here," Kelly says, standing on the two-thousand-year-old stones.

A sculpted limestone block found in the center was probably used for writing or reading the Torah. Its relief depicts the oldest menorah ever found on stone.

According to archaeologists, the Magdala synagogue was destroyed in 67 or 68 AD by Romans in their first war with Jews. Until the Magdala Stone was discovered, the oldest menorah ever found was on Rome's Titus Arch of 82 AD.

In addition to the synagogue, its unique Magdala Stone and its menorah, the archaeologists also found fishing pools and Jewish ritual baths.

"Actually what the archaeologists are saying now is we're digging up an entire 1st century city," says Kelly, adding that there are still 12 acres left to dig.

The site's hospice and restaurant are still under construction, but the lavish inter-faith chapel is ready.

Since the site formally opened to tourists and pilgrims in May, some 5,000 people have visited, says Mariana Bravo, of the Magdala Center.

She calls the project, based on donations, a "cross-roads of Jewish and Christian history."

Given that the synagogue stems from a time that precedes many modern religious divisions, Kelly says it's an important symbol that's just as valuable today.

"In here, we have a place that helps us to recognize what we share in common."