What Was Machu Picchu For? Top Five Theories Explained 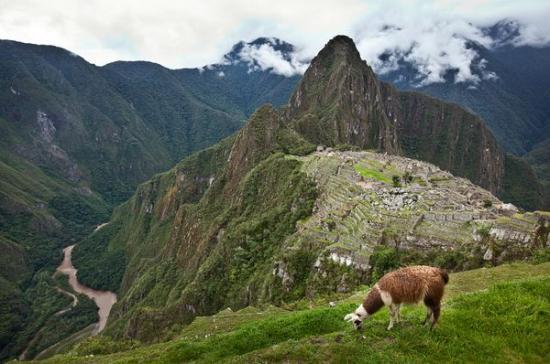 Machu Picchu is encircled by the Urubamba River (pictured), considered sacred by the Inca. Photograph by Michael and Jennifer Lewis, National Geographic

Nestled atop a mountain ridge in Peru, the 15th-century Inca city of Machu Picchu had sat largely forgotten for centuries—until archaeologist Hiram Bingham began excavations of the ruins a hundred years ago this week.

Now one of the most popular tourist destinations in the world, Machu Picchu's original purpose is still unknown—though many archaeologists think they are closer to finding an answer. Here are some of the top theories about Machu Picchu proposed—and in some cases disproven—in the century since its "rediscovery."

During his lifetime, Bingham, of Yale University, had two theories regarding the purpose of Machu Picchu. The first—that it was the birthplace of Inca society—came about when he was led to the site by local farmers in 1911.

Bingham later modified that theory and suggested the site was also the legendary "lost city" of Vilcabamba la Vieja, where the last of the independent Inca rulers waged a lengthy battle against Spanish conquistadors in the 16th century.

Bingham was wrong on both counts, however. Archaeologists now know the actual "last refuge" was located in Espíritu Pampa, a jungle site about 80 miles (130 kilometers) west of the Inca capital city of Cusco.

Ironically, Bingham visited Espíritu Pampa in 1911, but he decided the site was too small and not grand enough to be the legendary city.

Later excavations in the 1960s and extensive mapping in the 1980s by Vincent Lee, a Colorado-based architect and Andean explorer, revealed Espíritu Pampa to be far bigger than Bingham thought.

The indigenous peoples Bingham encountered at Espíritu Pampa had an alternative name for the site: Vilcabamba Grande.

This should have been a clue to Bingham that the site was much bigger and more important than what he was seeing, Lee suggested.

Bingham "had found the Inca's last refuge he was looking for, but it just wasn't as fancy as he expected it to be."

2) Machu Picchu Was a Holy Nunnery

Bingham also speculated that Machu Picchu might have been a temple devoted to the Virgins of the Sun, a holy order of chosen women dedicated to the Inca sun god, Inti.

This theory was largely based on dozens of skeletons Bingham's team found buried at the site. U.S. osteologist George Eaton said in the early 20th century that the remains were nearly all females.

"I think Bingham's idea of Vilcabamba [the last Inca city] came first, because that's what he was actively looking for," said John Verano, an anthropologist at Tulane University in New Orleans.

This theory was also debunked in 2000, when Verano, then at Yale, examined the remains and found that the skeletons were about half males and half females. Verano's analysis was based on skeletal differences between the genders that were not known during Eaton's time.

Verano thinks Eaton may have been misled by the relatively diminutive size of the Andean people, who are typically shorter and less robust than the European and African skeletons with which Eaton would have been more familiar.

"He probably saw the small bones and assumed they must be female," he said.

Interestingly, Eaton correctly noted that some of the Machu Picchu skeletons belonged to infants and children. But rather than viewing them as evidence contradicting Bingham's theory, he attributed the child remains to "indiscretions" by some of the holy virgins, Verano said.

Archaeologists now generally agree that the skeletons at Machu Picchu were not those of Inca priestesses, but rather helpers who were brought in from all over the Inca Empire to serve at the site.

"If you thought of Machu Picchu as a royal hotel or a time-share condo for the Inca emperor and his guests, then these were the staff who cooked the food, grew the crops, and cleaned the place," Verano said.

3) Machu Picchu Was a Royal Retreat

Verano's interpretation of the Machu Picchu skeletons is consistent with one of the most popular theories about the site: that it was the royal retreat of the 15th-century Inca Emperor Pachacuti.

According to this idea, Machu Picchu was a place for Pachacuti and his royal court, or panaca, to relax, hunt, and entertain guests.

"The members of Pachacuti's panaca may have lived there during the year for a few days, weeks, or months," said Guillermo Cock, a Lima-based archaeologist who has also received funding from the National Geographic Society's Committee for Research and Exploration. The "royal estate" theory, first proposed in the 1980s, is largely based on a 16th-century Spanish document that referred to a royal estate called Picchu, which was built in the same general area as Machu Picchu.

Other scholars have speculated that the Inca had a more spiritual purpose in mind when they built Machu Picchu.

A 2009 study by Giulio Magli, an astrophysicist at the Polytechnic Institute in Milan, Italy, postulated that the site was a scaled-down version of a mythic landscape from the Inca religion.

According to Magli, Machu Picchu was a pilgrimage site where worshipers could symbolically relive a harrowing journey purportedly taken by their ancestors. That trek began in Bolivia's Lake Titicaca and continued beneath the earth before emerging at a place close to Cusco.

5) Machu Picchu Was Built to Honor a Sacred Landscape

According to another theory, proposed by archaeologist and anthropologist Johan Reinhard in his 1991 book Machu Picchu: Exploring an Ancient Sacred Center, Machu Picchu occupied a special place in the "sacred landscape" of the Inca.

For example, Machu Picchu is built atop a mountain that is almost completely encircled by the Urubamba River, which the Inca named the Vilcamayo, or Sacred River.

Reinhard also pointed out that the rising and setting of the sun, when viewed from specific locations within Machu Picchu, aligns neatly with religiously significant mountains during the solstices and equinoxes. The Inca believed the sun to be their divine ancestor.

"It's an example of cosmology intertwining with sacred landscape that is virtually unique in the Andes ... [and] that takes on a degree of sacrality because it combines the Earth and the sky, which are also combined in Incan thought," said Reinhard, who is also a National Geographic explorer-in-residence.

While most theories about Machu Picchu emphasize either a utilitarian or spiritual aspect for the site, Reinhard and other scholars say the two ideas need not be mutually exclusive. "It probably was a royal [retreat] ... but to say it's a retreat ... doesn't tell me why it is where it is, and why so much effort went into building it," Reinhard said.

Peruvian archaeologist Cock noted that unlike many cultures today, the Inca did not distinguish between church and state, so the notion that a site could serve dual purposes would not have been unusual.

"For the Incas, the two ideas were integrated," he said. "Anywhere the emperor lived was sacred, because he was sacred."