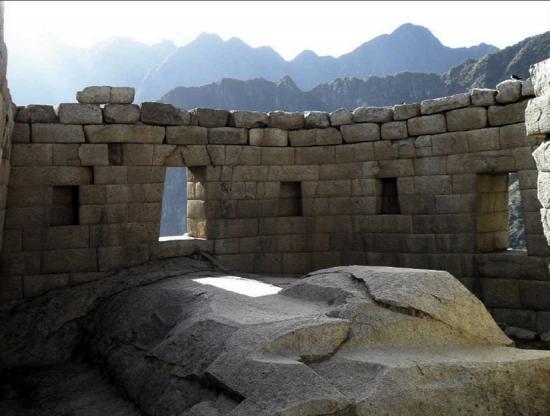 The site at Machu Picchu where archaelogists believe a state of an Inca emperor once stood.
- Paolo Greer

A mysterious stone statue, possibly the portrait of the great Inca emperor Pachacuti, once stood in Machu Picchu, according to archival research.

Likely placed against a round stone wall on one of Machu Picchu's terraces, the statue had already disappeared by the time American explorer Hiram Bingham climbed the steep jungle slope to be faced with an archaeological wonder exactly a century ago on July 24, 1911.

Bingham, who has been credited as one possible inspiration for the "Indiana Jones" character, saw "a remarkably large and well-preserved abandoned city " perched some 8,000 feet in the clouds "in a wonderfully picturesque position," he wrote in the March 26, 1914, issue of Nature.

Surrounded on three sides by the gorges of the Urubamba River (also called the Vilcanota River), and tucked between two massive mountain peaks -- the Huayna Picchu and the Machu Picchu -- the vine-covered ruins of "the lost city of the Incas" were never really lost at all.

"Machu Picchu was never lost to the locals and certainly not to the huaqueros [treasure hunters and tomb-robbers] who looted the site before Hiram Bingham was born," American explorer and researcher Paolo Greer told Discovery News.

"I really believe that Bingham was one of the best things that happened to Machu Picchu. He actually stopped the looters who had sacked the ruins for decades before he arrived," Greer said.

The stone statue was lost to such plundering, said Greer.

"According to old documents, it was last seen in Machu Picchu in the 1860s. Then, possibly around 1880, it fell victim of the local treasure hunters," he said.

Greer, who has spent much of the last two decades studying Inca ruins, made in 2008 the controversial claim that Machu Picchu was "discovered" 43 years before Bingham's arrival by an obscure German entrepreneur named Augusto Berns.

While tracking down Berns' activities through documents in the National Library of Peru, Greer found a specific reference to the mysterious statue.

"Indeed, it was Augusto Berns himself who saw the sculpture. In his private letters he wrote about a large effigy of an Inca, placed as a sign, and 'formerly used as a model for the silver molders.' He mentioned that it was knocked down by those searching underneath it for gold and silver idols," Greer said.

According to the researcher, the stone effigy likely represented Pachacuti (about 1391– 1473), regarded as the greatest of the Inca emperors. With a name meaning "Earthshaker" or "He Who Changes the World," the Genghis Khan of the Incas conquered a huge territory and is widely credited with building Machu Picchu.

The presence of a stone statue with his likeness would strengthen the hypothesis that Machu Picchu held Pachacuti's tomb.

"The stone sculpture might have simply been the mold for a lost gold effigy said to stand on top of the emperor's tomb," Greer said.

He believes that the emperor's mummy was placed in what Bingham called "The Royal Mausoleum," a cave below the Torreón or the Temple of the Sun in Machu Picchu, and later moved to an upper crypt.

"The room above the mausoleum features a rounded plinth on which a gold statue of the emperor once stood," Greer said.

The statue is described in the 1557 "Narrative of the Incas" by Juan de Betanzos, one of the most important sources on the Incan civilization.

According to Betanzos, Pachacuti ordered "a golden image made to resemble him be placed on top of his tomb." The gold statue was to be worshiped instead of his mummy.

"The latest research tells us that Machu Picchu was a great monastery where they worshipped the [royal] mummies," Lumbreras told Peru's news agency Andina.

Unfortunately, the mummies of the Inca emperors are now lost. To stop the worshipping of the mummified remains, and to possibly steal the gold and treasures that were associated with the mummies,the Spanish seized the remains of 11 kings and several queens. Five royal mummies, including that of Pachacuti, who was "so well preseved that it seemed alive," were sent in 1560 to Lima and put on display in the Hospital of San Andrés.

Around 1638, they disappeared. Scholars have long maintained that the mummies still lie buried in the hospital's ground, yet all attempts to find them have proved unsuccessful.

The latest, carried in 2001 and 2005 by Brian Bauer, an anthropological archaeologist at the University of Illinois, Chicago, and two Peruvian colleagues, historian Teodoro Hampe Martínez and archaeologist Antonio Coello Rodríguez, involved a penetrating radar survey and test excavation which led to the discovery of an empty crypt.

"The fate of the royal Inca mummies remains unknown," the researchers concluded.

Greer, who fears that new buildings may soon cover the old hospital preventing any further digging for the mummies, believes that at least fragments of the Pachacuti stone statue could still be recovered.

"Berns said that, while he was away, the Indians 'cut up the statue and threw it in the river.' The river, though, was a long ways off to throw a stone statue. I do believe the pieces of the original carved figure of Pachacútec may still be buried in Machu Picchu. Indeed, I think I know where the statue once stood, " Greer said.