Machaerus, King Herod's fortress in Jordan which was razed by the same Roman legion that destroyed Masada, before which Salome did her dance and John the Baptist was killed

King-size mikveh in Herod's only palace built outside modern Israel, at Machaerus, Jordan Courtesy of the Hungarian Archaeological Mission to Machaerus
Archaeologists have uncovered a king-size mikveh in the ruins of Machaerus, a fortress built by the vassal Roman king Herod by the Dead Sea.
The Machaerus fortress was erected on a prominent hill about 32 kilometers southwest of Madaba. The mikveh ritual bath and immersion pool used for purification were apparently built for the Herod royal family's personal use.
The bath is the biggest of its kind ever found in Jordan. It boasts 12 steeps and a reserve pool containing water to fill the pool when its water ran low.
Beyond its sheer dimensions, the architecture closely resembles mikvehs discovered in Qumran, on the other side of the Dead Sea, in Israel,  that had previously been considered to be unique.
The king-size mikveh was found three meters below the royal courtyard, where it had been hidden under 2,000 years of sand and dust. It had originally been equipped with a vaulted stone ceiling.
The roof of the mikveh was destroyed in 71 C.E. when the 10th Roman legion, X Frentensis, headed by Lucilius Bassus, attacked the desert fortress, which at that point was sheltering Jewish fighters from the Great Jewish Revolt (66-73 C.E.). The excavators also uncovered collapsed walls, four Roman ballistic missiles and two collapsed massive column drums.

Simulation of the royal bathhouse in Machaerus, built by King Herod in Jordan. Courtesy of the Hungarian Archaeological Mission to Machaerus
Monumental walls

Dr. Győző Vörös inside Machaerus' 15.6-m deep cistern, which could hold nearly 30,000 gallons Courtesy of the Hungarian Archaeological Mission to Machaerus
The archaeological investigation of Machaerus was first undertaken in 1968 by the American Archaeological Baptist Mission, led by E. Jerry Vardamann.
The most recent excavations, by a Hungarian-Jordanian team led by Dr. Győző Vörös, have unearthed intact massive walls of the interior of the western fortification, around 9.2 meters (30 feet) in height. For the first time since the days of yore, the extraordinary dimensions of the Herodian desert citadel were unveiled.
The excavators also found a vast underground cistern some 18 meters deep, that watered the Dead Sea desert fortress gardens and Roman style baths. The archaeological analysis has showed that the cistern remained in use throughout the Herodian period.

Two re-erected columns, one Doric (right, stumpier) and one Ionic, standing atop Machaerus with the Dead Sea in the background. Courtesy of the Hungarian Archaeological Mission to Machaerus
The excavators also discovered dozens of Hasmonean and Roman coins, as well as 47 Aramaic ostraca (broken pottery shards inscribed with Aramaic letters).
Where Salome danced
Actually, Herod – known as the great builder of antiquity – didn't build this royal palace in Jordan. It was actually of Hasmonean origin, and had been erected by the king Alexander Jannaeus in around 90 B.C.E., on a towering plateau known as Mukawir, which rises 800 meters high above the arid Dead Sea
What Herod did was to renovate and redevelop the fortress that Jannaeus built.
Machaerus was of critical importance to the defense of Judea, partly thanks to its bird's eye view of the capital, Jerusalem. Rabbinic writings report that the smoke of the sacrificial offerings could been seen rising from the altars of the Herodian temple in Jerusalem all the way in Machaerus (Mishnah 3, Tamid 3.8).
Any army approaching Jerusalem from the east would first have to occupy Machaereus. Fire signals could be lit on the fortress walls, warning the other citadels of encroaching enemies.
As Pliny the Elder wrote, "Machaerus, after Jerusalem, the strongest fortification in Judea" (Historia Naturalis, V. 15, 16). Evidently, the Romans considered the site better fortified than either Herodium and Masada. But then, Machaerus was more than just a military outpost.
When fixing up Machaerus, Herod also built a palace with a courtyard, a Roman-style bath, a triclinium for fancy dining, and a formal courtyard with a small royal garden (peristyle) surrounded by porticos on four sides.
That is where, according to the historian Josephus Flavius, Salome danced for Herod Antipas.
Head on a plate
Shortly before the Passover in 32 C.E, King Herod held a large celebration for his birthday at Machaerus. During the festivities he invited his stepdaughter, the princess Salome, to dance before his court.
So delighted was Herod at Salome’s performance that he promised her anything she requested—up to half his kingdom. Upon her wicked mother’s advice, according to the story, Salome asked for the head of John the Baptist.
Though greatly distressed, Herod, “out of regard for his oaths and for those reclining with him commanded it to be given; and he sent and had John beheaded in the prison. And his head was brought on a platter and given to the maiden, and she brought it to her mother.” (Matthew 14:1-11. Mark 6:17-28.)
According to Josephus, the Baptist was brought to Machaerus in chains and put to death (Jewish Antiquities, Book 18, chap. 5, par. 2 [Loeb 18.119]).
Machaerus also includes a semicircular apse in the axial center of the courtyard, marking the place of King Herod’s throne, which was later passed on to his son Tetrarch Herod Antipas (the Baptist's executioner).
The archaeologists have also re-erected two ancient Herodian columns of the Doric order (3.8 meters high) that stood in the royal peristyle courtyard, where Salome is said to have danced, and another of the Ionic order  (4.7 meters high) that stood in the palace bathhouse.
At the mercy of the Romans
Machaerus was destroyed in 71 C.E. by the same Roman legion that captured Masada from the Jewish zealots, the Tenth Roman Legion. In both cases the Romans are said to have  built a siege ramp to gain access, though in Masada's case at least, argument rages to this day about what really happened there.
Again in both cases, the only known account belongs to Josephus, himself a Jewish rebel who turned coat and joined the Romans.
Josephus wrote that the Romans captured Eleazar, a young rebel from a large and distinguished family, who had recklessly wandered outside Machaerus' gate. The Roman general Lucilius Bassus “ordered Eleazar to be stripped and carried to the spot most exposed to the view of the onlookers in the city and there severely scourged him.”
The Machaerus rebels were “profoundly affected by the lad’s fate,” Joseph tells us, and “the whole town burst into such wailing and lamentation as the misfortune of a mere individual seemed hardly to justify.”
Noting this, Bassus erected a wooden cross as if to prepare for Eleazar’s crucifixion. As Bassus had intended, this led to the negotiations that saved Eleazar’s life and gave the residents of Machaerus permission “to depart in safety.”
In these circumstances, the ramp that the Romans were building was never completed, and the still-existing uncompleted ramp testifies to the essential veracity of Josephus’s account.
Unlike at Masada, the rebels at the Machaerus citadel survived. But apparently this compact did not apply to the Jews in the lower city of Machaerus. Some Jews tried to escape the Roman siege at night but were caught. The Romans proceeded to slay the 1,700 men living there and enslave the women and children (Josephus, Jewish War 7.190-209 (Loeb ed.)
Thus ended the settlement in Machaerus that, within its walls, had hosted five figures from the Gospels: Herod the Great Herod; his son, Herod Antipas; his second wife, Herodias; her daughter from a previous marriage, Salome and John the Baptist.
The archaeological site 2,000 years later is historically significant to Christians, Muslims and Jews – and features a memorial to Prophet Yahya Bin Zakariyya, also known as John the Baptist. 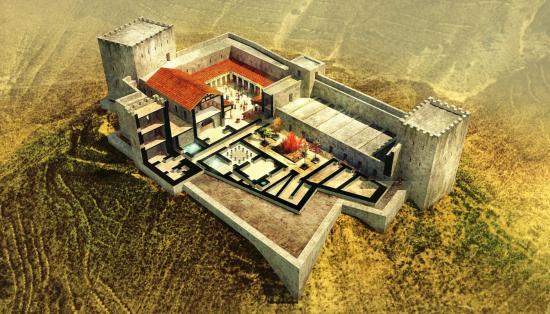 Simulation of Herod's hilltop palace-cum-fortress Reconstruction at Machaerus, Jordan: The Royal Courtyard is visible in the upper right corner and the bathhouse in the lower left. Courtesy of the Hungarian Archaeological Mission to Machaerus