The lines and cave clouds in the Mäanderhöhle were examined with a 3D scanner. Credit: Karina Rottner
The Mäanderhöhle cave near Bamberg was previously regarded as an archaeological sensation. It was thought to contain some of the oldest cave art in Germany. However, Julia Blumenröther, a former student at Universität Erlangen-Nürnberg, has demonstrated in her Master's thesis that the markings discovered inside the cave in 2005 are not fertility symbols carved by humans as previously thought. In fact, these lines occurred as a result of natural processes, the archaeologist says.
One of the caverns in the 75-metre long cave is full of spherical deposits of minerals known as cave clouds that form on rocks in a similar way to stalactites and stalagmites. In 2005, cave researchers discovered a large number of lines that looked like they could have been made by humans on the rock-hard surface of these cave clouds. An archaeologist studied these lines several years later and published his interpretation of them in a preliminary report, in which he said that the between 14,000 and 16,000 year-old lines were made by humans and probably depicted a phallus and abstract female figures.

'The preliminary report required further scientific investigation,' says Julia Blumenröther. Together with her project partner from the Neanderthal Museum in Mettmann and with support from the Bavarian State Office for the Preservation of Historical Monuments, she examined 138 lines that were presumed to have been made by humans over the course of two explorations. 'If these lines were made by humans, there would be clear evidence that Stone Age tools were used, as well as similar depictions in other locations,' explains PD Dr. Andreas Pastoors, an expert on Stone Age art from the Neanderthal museum. 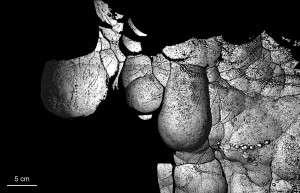 Image from a 3D scan of the cave clouds and lines in the Mäanderhöhle cave. Credit: Andreas Pastoors
Julia Blumenröther, who was a student at the time she conducted her research, used a wide range of archaeological methods to document and analyse the lines in the Upper Franconian cave. She also used new technologies such as digital microscopy and structure-light 3D scans to examine the depth and shape of the lines. The young researcher compared the digital images showing cross-sections and the course of the lines with carved lines in other examples of cave art, as well as with lines created in the laboratory. To do so she had lines carved into samples of the rock taken from the cave using specially designed engraving tools.

A detailed examination led to the conclusion that humans most likely did not play a role in creating the lines in the Mäanderhöhle cave. 'The scientific analysis showed that the courses and cross-sections of all of the lines contradict the hypothesis that they were carved by humans using a hard, sharp object. Furthermore, none of the 138 lines depict any kind of known Stone Age motif,' Julia Blumenröther says. 'The Mäanderhöhle with its cave clouds is certainly of great interest for cave research, but it cannot be regarded as containing the oldest Stone Age cave art in Germany,' she concludes.