The most important olive oil production center of the Mediterranean, which was discovered in 1910 by European archaeologists, still remains unknown even to many of the locals in the region 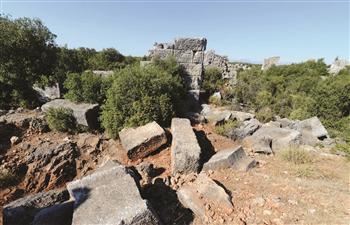 The village was one of the most advanced and important olive oil production centers in Pamfilya, the heart of the olive oil export in the Mediterranean region. AA photo

The ancient settlement of Lyrboton Kome in Antalya’s Varsak province, discovered in 1910 by European archaeologists but not yet excavated, was the most important olive oil production center of the region in antiquity.

Professor Nevzat Çevik, a member of Akdeniz University’s Archaeology Department, recently said that Lyrboton Kome (Lyrboton village), connected to Antalya’s ancient city of Perge, remains unknown even to many of the locals. Çevik added that the artifacts and epigraphs that they found there date back to the first century B.C. Even though these findings look as if they are from the Roman and Byzantine periods, they are in fact characteristic of the Hellenistic era.

The Turks arrived at the village in the early 13th century under the direction of Varsak Bey of the Üçok tribe and settled in the Varsak plateau. The village, rarely known today, was one of the most advanced and important olive oil production centers in Pamfilya, the heart of the olive oil export in the Mediterranean region during the period of antiquity.

Along with the discoveries of dozens of olive oil ateliers and cisterns, more than 80 cemeteries, houses and baths and three churches have been located in the site, according to Çevik. Via Sebaste (Emperor’s Road), an Ancient Roman road, also reached the city of Perge by passing through the strait of Döşemealtı and Lyrboton Kome. Çevik said: “The most important remain in the settlement is the tower designed to store and protect olive oil. An epigraph that we found informs us that Arete, the goddess of virtue, had this tower made with her own money and dedicated it to the Emperor Domitian and Artemis of Perge. Another epigraph tells about the olive groves donated by Mouas, the grandson of Arete, and the tasks that relate to them.

Foundation to maintain the production

According to the information in the epigraphs, a substantial amount of olive oil production took place in the village and a family foundation was found to maintain the production, Çevik said. Connected to the village was the site of Kuru Düden, which includes the Düden Fall. Çevik, noting that they found remains of farms there, stated: “The single most important site of production is actually inside today’s park near the Düden Fall. The name of Düden in antiquity was Katarraktes, meaning pouring water.

There are important remains of the necropolis and oil ateliers in the site.

Çevik has added that two female statues and the crater that passed through Tivalas have been exhibited in the Antalya Museum. Dionyssos, the god of the grape harvest, winemaking and wine, was depicted on the exhibited crater, revealing that grape harvest also took place in the region.

Çevik reported that the first researches in the Varsak province were led by Ormerod and Robinson, European archaeologists and epigraphers, in 1910 and then by Keil in 1926. However, the first and only archaeologically comprehensive study of the region was undertaken by his team in 1996-1997 with support from the Akdeniz University. Çevik added:

“Although this is one of the most significant olive oil production centers in the Mediterranean region, no excavation or restoration work took place there after the scientific surface work we did 16 years ago. Lyrboton Kome should be at least partially excavated and cleansed of plants and debris. A touristic project needs to be organized that will construct routes for tourists and place signboards for direction and information. The threat of treasure hunters could be eradicated this way.

“Further excavation, restoration and consolidation need to be implemented to physically prove the identity of the region as an olive oil production center. At least one olive oil atelier should be excavated and exhibited. Also we can keep up with the tradition of ancient festival of Apollo by organizing it every year and naming it “Varsak-Apollo Festivities”. This is the way to keep traditions alive and attribute them to today’s people.”