An archaeological discovery by the University of Reading is set to shed new light on the history of farming.

Dr Gabor Thomas and his team have found a 7th Century iron plough coulter during excavations at Lyminge, Kent. 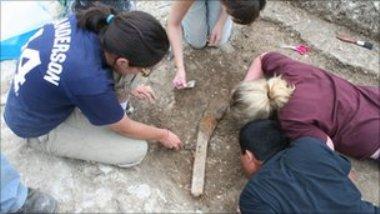 A coulter is a vertical soil slicer mounted like a knife to cut through the soil ahead of a plough share to improve the plough's efficiency.

The coulter, one of the defining features of a 'heavy plough', transformed the landscape of England.

Unlike the small fields associated with earlier light ploughs they cultivated the land in long narrow strips making the large open fields which would become a standard feature of the medieval countryside.

Previously it was believed heavy ploughs were introduced to Anglo-Saxon England in the late 10th Century or 11th Century, on the basis of representations in manuscripts of this period.

However, the Lyminge coulter can be firmly dated to the 7th Century. 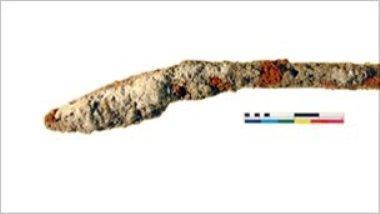 Compared to light ploughs, heavy ploughs, pulled by teams of eight oxen, were high-tech and fast.

They permitted the cultivation of heavier soils, especially in areas of poor drainage, by creating a deep furrow characteristically known as 'ridge and furrow'.

Dr Thomas, from the University of Reading's department of archaeology, said: "The coulter was discovered at the base of a structure known as a sunken featured building.

"It looks to have been carefully placed at the bottom of the pit on the building's abandonment, perhaps as a ritual offering with symbolic connotations."

Dr Thomas said the discovery of the Lyminge coulter was significant, as it enabled Anglo-Saxon landowners to maximise profits from their estates and increase productivity.

"This 7th-century wealth may have been invested in the establishment of England's earliest Christian monasteries as represented at Lyminge," he said.

Peter Fowler, a leading Anglo-Saxon archaeologist and former professor of archaeology at Newcastle University, said the find was of "huge significance".

"This is the object I have been waiting for all my life," Professor Fowler said.

"It was known in Roman Britain but apparently then forgotten, and with a lack of evidence we believed that such a plough was unknown in England before the Late Saxon period."

The 2010 excavation forms part of research in which archaeologists have been unearthing the remains of an Anglo-Saxon monastery preserved under the inhabited core of the village in Lyminge.

The excavations are being funded by the British Academy, Society of the Antiquaries and the Royal Archaeological Institute.

The coulter is currently undergoing analytical conservation by a team at the Institute of Archaeology, UCL.