German experts are carefully taking apart a complete Celtic grave in the hope of finding out more about the Celts' way of life, 2,600 years ago, in their Danube heartland.

It wasn't the most glorious final journey for an aristocratic Celtic lady who, in life, clearly had a bit of style.

She died just over 2,600 years ago and rested in peace until a few months ago when her grave was dug up in its entirety - all 80 tonnes of it - and transported on the back of a truck through countless German towns.

In the grave, too, was a child, presumed to be hers. Their last inglorious journey ended in the back yard of the offices of the archaeological service of the state of Baden-Wuerttemberg.

When the truck arrived, the grave encased almost entirely in concrete, was unloaded and a tent constructed around it.

The archaeologists decided that removal of the whole grave would allow them to use the most modern resources of analysis, from computers to X-rays.

From the gantry above a pit, archaeologists leant down and scraped the earth from the bones and jewels speck-by-speck.

What emerged was the lady, the child and their ornaments. 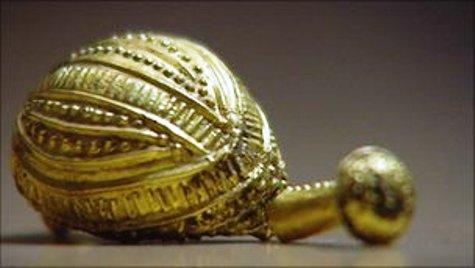 Because of the amount of gold and amber jewellery, they are assumed to be important, a princess and the young prince or princess. It indicates that the early Celts had an aristocratic hierarchy, which has been a matter of dispute among archaeologists.

"It is the oldest princely female grave yet from the Celtic world," said Dr Dirk Krausse, who is in charge of the dig.

"It is the only example of an early Celtic princely grave with a wooden chamber."

The archaeologists are excited because this grave was preserved by the water-sodden soil of the region so that the oak of the floor was intact, for example, and that puts an exact date on it. The oak trees were felled 2,620 years ago, so, assuming they were felled for the grave, our lady died in 609BC.

The grave had also not been robbed down those 26 centuries, unlike many others.

This means that the jewellery is still there, particularly beautiful brooches of ornate Celtic design in gold and in amber.

We usually think of the Celtic heartland as the western edges of Europe - Wales, Scotland and Ireland and Brittany in France.

But Dr Krausse says the real Celtic heartland was actually in the region in the upper reaches of the Danube, from where the Celts could trade. 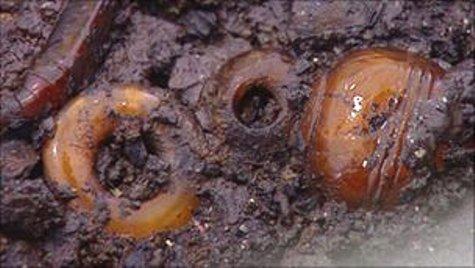 Treasures in the mud reveal the early Celts' love of ornament

"Celtic art and Celtic culture have their origins in south-western Germany, eastern France and Switzerland and spread from there to other parts of Europe," said Dr Krausse.

They were then squeezed by the tribes from the north and the Romans from the south, so that today they remain only on the western edges of the continent.

The lady in the grave reveals the Celts to have been a rather stylish people with a love of ornament, examples of which are coming out of the mud of the grave in the tent in Ludwigsburg near Stuttgart.

From the gantry above the grave, Nicole Ebenger-Rest has been doing much of the painstaking excavation.

As well as the rings and brooches, she uncovered the teeth of the Celtic princess. But what also excited her were specks of cloth or food or other organic matter which might reveal a way of life.

"It is a skeleton but it's still a human being so you have a natural respect," she said, looking her fellow human being in the face, across the divide of 26 centuries.

"It's a natural respect between two people."